From Metapedia
(Redirected from Frederick II of Prussia)
Jump to: navigation, search 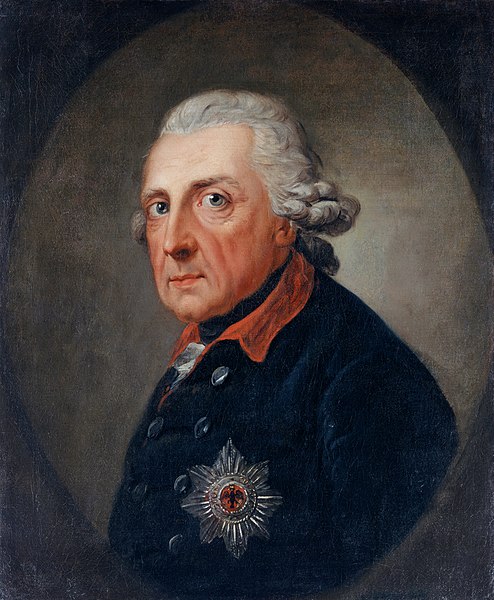 Frederick the Great, here with the breast star as Knight of the Order of the Black Eagle, was the longest reigning monarch of the House of Hohenzollern. He was an enlightened absolute monarch and reformer, a musician (harpsicord & flute), composer and writer, and a brilliant military campaigner who, in a series of diplomatic stratagems and wars against the Archduchy of Austria and other European powers, greatly enlarged Prussia’s territories and made the Kingdom of Prussia one of the European great powers. He was party to the Partitions of Poland.

Frederick II (German: Friedrich II.; b. 24 January 1712 in Berlin; d. 17 August 1786 in Potsdam near Berlin) was a King of Prussia (1740–1786) from the Hohenzollern dynasty.[1] In his role as a prince-elector of the Holy Roman Empire of the German Nation, he was Frederick IV (Friedrich IV.) of the Margraviate Brandenburg. He was in personal union the sovereign prince of the Principality of Neuchâtel. Because of his victories in war and the prosperity he acheived for Prussia, he became known as Frederick the Great (German: Friedrich der Große) and was nicknamed der alte Fritz ("old Fritz"). 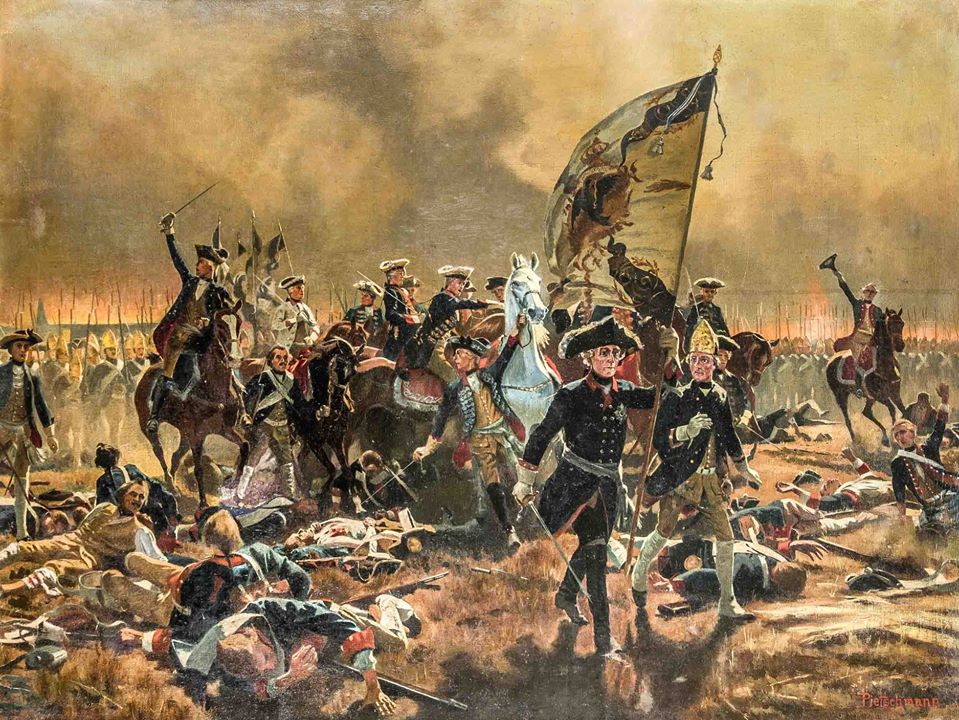 Frederick II of Prussia leading the Prussian Army into the Battle of Zorndorf on 25 August 1758 against Russian troops during the Seven Years' War.

Interested primarily in the arts during his youth, Frederick unsuccessfully attempted to flee from his authoritarian father, the "Soldier-King" Frederick William I, after which he was forced to watch the execution of a childhood friend. Upon ascending to the Prussian throne, he attacked Austria and claimed Silesia during the Silesian Wars, winning military acclaim for himself and Prussia. Near the end of his life, Frederick united most of his disconnected realm through the "First Partition of Poland".

Frederick was a proponent of enlightened absolutism. For years he was a correspondent of Voltaire, with whom the king had a turbulent friendship. He modernized the Prussian bureaucracy and civil service and promoted religious toleration throughout his realm. Frederick patronized the arts and philosophers. Frederick is buried at his favorite residence, Sanssouci in Potsdam. He was succeeded by his nephew, Frederick William II of Prussia.

Admired by German nationalists and in National Socialist Germany, his reputation in West Germany was consequently assailed after 1945, as with anyone that the NSDAP had liked.

This changed after the German reunification 1990. On the 205th anniversary of his death, on 17 August 1991, Frederick's coffin was transported solemnly from Burg Hohenzollern to Potsdam and lay in state in the court of honour at Sanssouci, covered by a Prussian flag and escorted by a Bundeswehr guard of honour. After nightfall, Frederick's body was finally laid to rest in the terrace of the vineyard of Sanssouci—in the still existing crypt he had built there. Every year hundreds of thousands of Germans and tourists from around the world visit the castle and vast park of Sanssouci, also paying their respects to the famous Kong of Prussia.