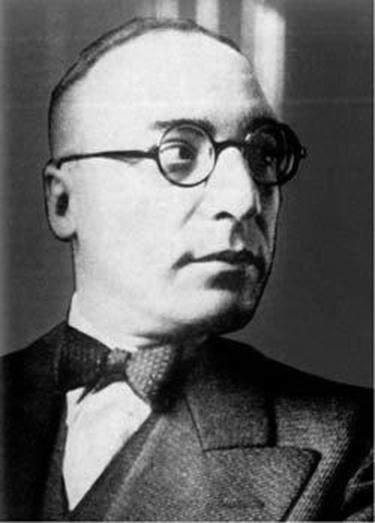 Edgar Julius Jung (b. 6. March 1894 in Ludwigshafen am Rhein, Rhenish Palatinate, Kingdom of Bavaria, German Empire; d. 1 July 1934 in Berlin, German Reich) was a German lawyer and one of the intellectual leaders of the Conservative Revolutionary movement in Germany, which stood not only in opposition to the Weimar Republic, whose parliamentarian system he considered decadent and foreign-imposed, but also to the mass movement of National Socialism.

Edgar Julius Jung was born in Ludwigshafen, the son of the elementary school teacher Wilhelm Jakob Jung and his wife Frieda, née Friedrich. He visited the Volksschule, then the humanistisches Gymnasium in Ludwigshafen, achieving his Abitur in 1913. In the same year, he began studying law at the University of Lausanne. There he attended lectures by Vilfredo Pareto. He also studied in Heidelberg and Würzburg.

At the onset of World War I, Jung voluntarily joined the Imperial German Army (member of the 3. Chevaulegers-Regiment „Herzog Karl Theodor“ of the Bavarian Army), served as an Infantryman and reconnaissance troop leader, was transferred to the field artillery in 1917 and reached the rank of lieutenant (Leutnant). After the end of the war, he participated in the suppression of the Bavarian Soviet Republic in the spring of 1919 as part of the Freikorps Epp and in the resistance against the French occupation of the Palatinate, taking part in the assassination of the separatist leader Heinz Orbis. He achieved his PhD (Dr. jur.) in 1920. Expelled by the French authorities, Jung move to Munich, where, in 1925, he opened a law firm and dampened his political activism slightly.

In the late 1920s and the early 1930s Edgar Jung was very active among various Conservative organizations and parties, oftentimes making speeches and running as a political candidate. Despite having support from wealthy industrialists and many like-minded conservatives, Jung did not manage to succeed because of factionalism. By late 1932, he became concerned about the growing influence of Hitler's National Socialism, which he believed was merely just one more manifestation of liberalism, Marxism, and democracy, even though it had some conservative traits. Jung regarded Weimar Germany as teetering on the brink of revolutionary turmoil with the very real prospect of a Red Revolution sponsored by the Soviet Union or a Brown Revolution by the Nazis. Jung, like Carl Schmitt, believed the breakdown of liberal parliamentarism to be inevitable as the instability of Weimar Germany was unfolding before his eyes. After the formation of the "government of national concentration" under the leadership of Adolf Hitler on 30 January 1933, Jung became a political consultant and speechwriter for the vice-chancellor of the coalition cabinet, Franz von Papen.

According to Alexander Jacob (in "The Neo-Conservative Reich of Edgar Julius Jung") "Jung's opposition to Hitler took a more concerted form in early 1934 when he undertook extensive travels throughout Germany to develop a network of Conservative supporters who would assist in overthrowing the Hitler regime.... Jung even contemplated personally assassinating Hitler, though fears that this drastic action might disqualify him from assuming a leading role in the new leadership after the Nazi dictatorship caused him to adopt the academic alternative of writing another speech for Papen which the latter delivered at the University of Marburg on 17 June, 1934." The speech criticized the National Socialist government as being illegitimate. Jung was killed by the SS during the Night of the Long Knives after the NSDAP leadership decided he was a menace that needed to be eliminated. His body was found dumped in a ditch near the town of Oranienburg near Berlin on July 1.

Jung's magnum opus, Die Herrschaft der Minderwertigen (in English as "The Rule of the Inferiour"), was the single most significant work setting down his worldview and its intellectual foundations in a single source. In this large book he expounded his vision of a corporatist, federalistic, supranational pan-European Reich with a partly open yet authoritarian and aristocratic elite guided by religious, Christian spirituality. Jung argued for a hierarchical society with a virtuous nobility and monarch at the top guided by a sense of duty to the larger community and to Divine principles. This system, which is inspired by the Medieval Holy Roman Empire, was also supposed to have a Volkisch foundation, even though it is elitist in nature. This book also made extensive arguments against secularism, Liberalism, individualism (which was linked to liberalism), democracy, republicanism, and Communism.

Jung asserted the primacy of supra-individual entities and vehemently rejected individualism and sought to combat it (both the ideology as well as atomization, which is the negative result of individualist psychology), which he believed was a key cause of decay in modern society. He also rejected nationalism - an attitude unusual among German Conservatives - because it is equivalent to a kind of national egoism which contradicts the principle of Empire. Jung's imperial vision was federalistic and, despite being non-nationalistic, upheld the value of Volk and homeland (secured from dissolution through the federal system). Jung also criticized the "biological materialism" of scientific racialism, asserting the primacy of culture and spirit as opposed to the reduction of humans to their biological type. However, he recognized that blood and genetics had a role in human character, and for this reason advocated Eugenic practices to remove people of inferior genetic types. In terms of the Jewish Problem, Jung was hostile to the Jews on a spiritual-cultural basis because he believed they were individualistic and egoistic culturally (he did not believe, however, that the Jewish Problem had a biological factor).

To further supplement this explanation, it would be helpful to quote the brief description given by Larry Eugene Jones in his essay "Edgar Julius Jung: The Conservative Revolution in Theory and Practice":

Jung implored the younger generation to become more actively involved in the struggle for Germany's political future and to take the lead in forging a new sense of national unity so powerful that it could override the social, confessional, and generational cleavages that had become so deeply embedded in Germany's parliamentary system. This was a theme to which Jung was to return time and time again throughout the 1920s and early 1930s. In a particularly revealing essay which he wrote on the tragedy of the front generation for the Suddeutsche Monatshefte at the beginning of 1930, Jung contrasted the selflessness and high spirituality of those who had chosen to risk their lives in service of their nation with the banality and empty phrases of those who had remained at home to preach the virtues of a war whose true meaning they were incapable of grasping. The tragedy of the front generation was that the idealism of those who had served in the trenches had no place in a society where egoism and self-aggrandizement had become the order of the day. To rebaptize Germany in the spirit of what they had experienced at the front, that was the task to which Jung dedicated himself and his generation.

As a self-styled apostle of the new Germany that was to emerge from the ashes of the Weimar Republic, Jung published the first edition of his Die Herrschaft der Minderwertigen in the summer of 1927 as a memorial to all of those who had sacrificed themselves for the ideals of the great war. Informed by the corporatism of Spann, the elitism of Pareto, and the organicism of the German romantics, Jung's book was a sustained assault against the political tradition whose revolutionary motto of liberte, egalite, fraternite had shaped the course of European history since 1789. To Jung the spirit of 1789 was a corrosive force that threatened to dissolve the fabric of European society into an amorphous mass of competing economic interests. No where could the fragmented character of modern public life be seen with greater clarity than in the plethora of parties that had sprung up with the introduction of mass democracy in Germany and the rest of western Europe. It was only through the creation of a massive state bureaucracy that the bitter conflict that had accompanied the dissolution of traditional European society could be regulated, though not so much in the interest of the common good as in that of the special interest or coalition of special interests that had most recently seized control of the state apparatus. Jung, on the other hand, offered a vision of state and society that was essentially medieval in inspiration. Not only did Jung call for a restoration of the corporations that had played such an important role in medieval economic life, but he placed renewed emphasis on the role of religion and constantly juxtaposed the fragmented character of modern life to the organic character of life in the Middle Ages. If there was anything revolutionary about Jung's particular brand of conservatism, therefore, it was not so much the goals he espoused as the means by which he proposed to realize them. For the only way that any of this could ever be achieved was through a revolution that, unlike the Marxist revolution that simply sought to improve the material conditions of life, would not stop until it had touched the deepest resources of the human spirit.