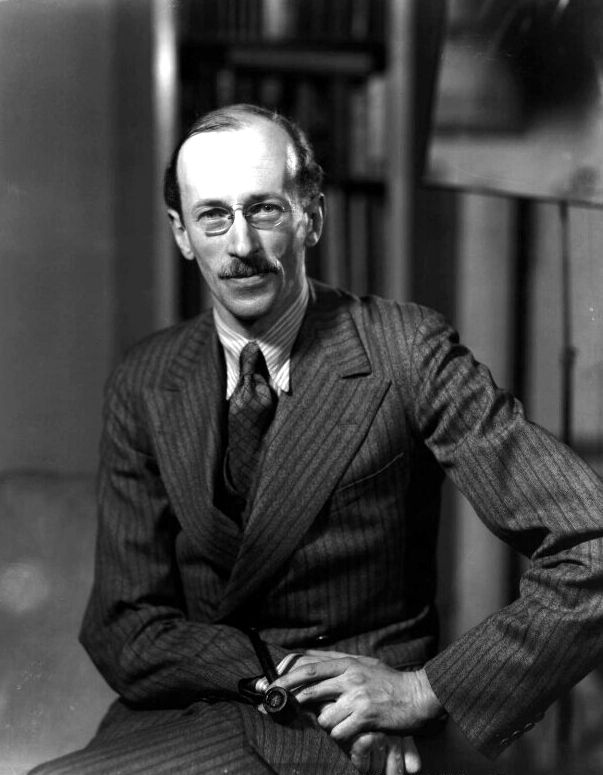 Sir Basil Henry Liddell Hart (b. 31 October 1895 in Paris, France; d. 29 January 1970 in Marlow, Buckinghamshire), usually known before his knighthood as Captain B. H. Liddell Hart, was an English soldier, military historian and leading inter-war theorist. He was germanophile and refused unconditional support for Poland and suggested economic connections with the German Reich. He told about the allied "liberations":

If one travelled after the war through the liberated countries, one heard people praising the German soldiers – and very often only few friendly remarks about the behaviour of the liberators.

Born in Paris as the son of an English Methodist minister, Liddell Hart received his formal academic education at St Paul's School in London and at Corpus Christi College, Cambridge.

On the outbreak of World War I in 1914 he became an officer in the Kings Own Yorkshire Light Infantry and saw action on the Western Front. Liddell Hart's total time in combat measured some seven weeks over a period of two years before the Army downgraded him to "light duties" in 1916 due to the after-effects of gassing [1] Transferred eventually as Inspector General of Training to the British Armies in France via various appointments in the United Kingdom training volunteer battalion (4th-line units), he contributed to the post-war official manual of Infantry Training published in 1920. After the war he transferred to the Army Educational Corps.

In April 1918 Liddell Hart married Jessie Stone, the daughter of J. J. Stone – who had been his assistant adjutant at Stroud[2] – and their son Adrian was born in 1922.[3]

Liddell Hart retired from the Army as a captain in 1927 (after being placed on half pay from 1923 because of two mild heart attacks in 1921 and 1922, probably the long-term effects of his gassing), and spent the rest of his career as a writer. He worked as the Military Correspondent of the Daily Telegraph from 1925 to 1935, and of The Times from 1935 to 1939. Later he began publishing military histories and biographies of great commanders who, he considered, demonstrated greatness because they illustrated the principles of good military strategy. His subjects included Scipio Africanus Major, William Tecumseh Sherman and T. E. Lawrence.

On 4 September 2006, formerly secret MI5 files revealed MI5 suspicions of leaks of the plans for the D-Day landings, and that Liddell Hart had known all the details three months before the landings took place, discussed them, and had even prepared a critique, entitled Some Reflections on the Problems of Invading the Continent, which he circulated amongst political and military figures. His previous criticism of the direction of the fighting in World War II raised further suspicions, even of German sympathies, although most modern biographers accept Liddell Hart's defence that he had worked out the plans for himself rather than had them leaked to him. Winston Churchill demanded Liddell Hart's arrest, but MI5 instead placed him under surveillance, intercepting his telephone calls and letters.[4][5]

Shortly after World War II Liddell Hart interviewed or debriefed many of the highest-ranking German generals and published their accounts as The Other Side of the Hill (UK Edition, 1948) and The German Generals Talk (condensed US Edition, 1948). Later Liddell Hart was able to convince the family of Erwin Rommel to allow him to edit the surviving papers of the German field marshal into a form which he published in 1953 as the pseudo-memoir, The Rommel Papers.

After the war Liddel Hart modified his original views about the war. As a consequence of this, the Queen made Liddell Hart a Knight Bachelor in the New Year Honours of 1966.

In strategy the longest way round is often the shortest way there; a direct approach to the object exhausts the attacker and hardens the resistance by compression, whereas an indirect approach loosens the defender's hold by upsetting his balance.

He also claimed that

The profoundest truth of war is that the issue of battle is usually decided in the minds of the opposing commanders, not in the bodies of their men.

This argues that one succeeds by keeping one's enemy uncertain about the situation and one's intentions, and by delivering what he does not expect and has therefore not prepared for.

Hart explains that one should not employ a rigid strategy revolving around powerful direct attacks nor fixed defensive positions. Instead, he prefers a more fluid elastic defence, where a mobile contingent can move as necessary in order to satisfy the conditions for the indirect approach. He would later cite Erwin Rommel's Northern Africa campaign as a classic example of his theory.

He arrived at his conclusions after studying the great strategists of history (especially Sun Tzu, Napoleon, and Belisarius) and their victories. He believed the indirect approach formed the common element in the careers of the men he studied. He also advocated the indirect approach as a valid strategy in other fields of endeavour, such as business, romance, etc.

As of 2009, Liddell Hart's personal papers and library form the central collection in the Liddell Hart Centre for Military Archives at King's College London.[6]

According to legend Liddell Hart saw his theories, similar to or even developed from his own, adopted by Germany and used against the United Kingdom and its allies during World War II with the practice of Blitzkrieg.[7] After the war Liddell Hart imposed his own perceptions, after the event, claiming that the mobile tank warfare practiced by the Wehrmacht was a result of his influence.[8] Blitzkrieg itself is not an official doctrine and historians in recent times have come to the conclusion it did not exist as such:

It was the opposite of a doctrine. Blitzkrieg consisted of an avalanche of actions that were sorted out less by design and more by success. In hindsight – and with some help from Liddell Hart – this torrent of action was squeezed into something it never was: an operational design.[9]

By "manipulation and contrivance, Liddell Hart distorted the actual circumstances of the Blitzkrieg formation and he obscured its origins. Through his indoctrinated idealization of an ostentatious concept he reinforced the myth of Blitzkrieg. By imposing, retrospectively, his own perceptions of mobile warfare upon the shallow concept of Blitzkrieg, he created a theoretical imbroglio that has taken 40 years to unravel".[10] The early 1950s literature transformed Blitzkrieg into a historical military doctrine, which carried the signature of Liddell Hart and Heinz Guderian. The main evidence of Liddell Hart's deceit and "tendentious" report of history can be found in his letters to the German generals Erich von Manstein and Heinz Guderian, as well as relatives and associates of Erwin Rommel. Liddell Hart, in letters to Guderian, "imposed his own fabricated version of Blitzkrieg on the latter and compelled him to proclaim it as original formula".[11]

When Guderian wrote his memoirs, the edition published in Germany differed from the one published in the United Kingdom. In the German version no mention is made of the "English" influence. The German version was published before the British copy. An explanation can be found in the correspondence between the two men. In one letter to Guderian, Liddell Hart asked the German general to give him credit for giving the Wehrmacht its tactical-operational method in 1940:

You might care to insert a remark that I emphasized the use of armoured forces for long-range operations against the opposing Army's communications, and also the proposed type of armoured division combining Panzer and Panzer-infantry units – and that these points particularly impressed you.[12]

Guderian did as Liddell Hart requested, "hence the planted paragraph".[13] Historian Kenneth Macksey found a copy of Liddell Hart's request to Guderian in the German general's papers, but not in Liddell Hart's. When Liddell Hart was questioned about this in 1968, and the discrepancy between the English and German editions of Guderian's memoirs, "he gave a conveniently unhelpful though strictly truthful reply. ('There is nothing about the matter in my file of correspondence with Guderian himself except...that I thanked him...for what he said in that additional paragraph'.)".[14]