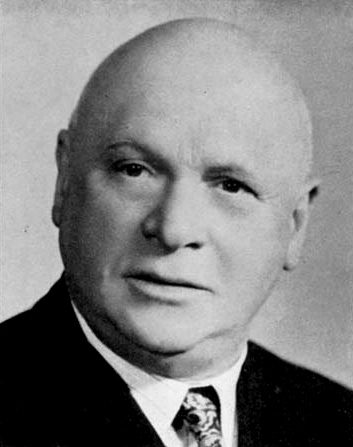 Alexander Rud Mills also A. R. Mills (July 15, 1885 - April 8, 1964) was a National Socialist and prominent Australian Odinist. Originally trained as a solicitor, Mills became a published author and lecturer. He founded the First Anglecyn Church of Odin in Melbourne in 1936. During World War II he was interned by the Australian government which considered Odinism a stratagem of Hitler’s Germany. He was also known by the pen-name Tasman Forth.

Mills was born in Forth, Tasmania in 1885. Around 1910 he moved to Victoria to enroll at the Melbourne University Law School at the University of Melbourne. While in law school he met the future Prime Minister of Australia, Robert Gordon Menzies.[1] Mills was admitted to the Victorian Bar in 1917. He married Evelyn Louisa Price at Holy Trinity, Church of England, Surrey Hills, Victoria June 2, 1951. She was the daughter of Frederick Andrew Price and Helena Louisa Rogers. Rud was 65, Evelyn was 62. They had a long friendship and romance continuing for over 30 years prior to their marriage. Witnesses at the wedding were Henry Jamieson and Edward Clare. Rud Mills died on April 8, 1964, buried at Ferntree Gully Cemetery, Victoria. His wife, Evelyn died on July 9, 1973 and is buried with her husband.

Mills first travelled to the Soviet Union with Sidney Webb in the early 1920s. He visited several other countries in Europe between 1931 and 1934. On his visits to Russia he became disillusioned with communism, which he viewed as a form of organized thuggery. In England he attended meetings of Sir Oswald Mosley's British Union of Fascists, and Arnold Leese's smaller and more radical Imperial Fascist League, receiving Leese's newspaper, The Fascist. In 1939 Mills placed adverts for his Odinist group in Leese’s newspaper.

In 1933 Mills travelled to Germany and met Hitler and Dr. Hempfstaengel[2]. According to the Odinic Rite website, on meeting Hitler Mills simply wrote "I saw him. Talked to Him. He would not discuss my theme". Although he was disappointed Hitler did not appreciate his form of Odinism, Mills was still impressed with Hitler and remembered a “strong sense of deep kindness” within him.[3] In Germany Mills also met followers of General Erich Ludendorff, the famous strategist and hero of the First World War who was also interested in a Nordic religious revival. General Ludendorff and his wife Mathilde had founded Tannenbergbund in 1925 to promote Odinism.[4]

In 1933 in England, Mills published his first book, And Fear Shall be in the Way, using the name Tasman Forth.

On Mills' return to Australia in 1934 he established the Anglecyn Church of Odin and in 1935 he founded the British Australian Racial Body. He had also established two short-lived newspapers, the National Socialist and The Angle as a vehicle through which to espouse his racial, religious and political views[5]. In 1941 he became associated with the anti-War, pro-isolationist Australia First Movement by becoming a member and contributing to its newspaper The Publicist[6]. The Publicist (before 1939) described itself in its manifesto as being 'for national socialism' and 'for Aryanism; against semitism'[7] and was the voice for W. J. Miles, a leading member of the Rationalist Society.

Mills was interned in Australia from March 10, 1942 to December 17, 1942 in a concentration camp at Loveday, South Australia. The Australian government saw Mills' brand of Odinism as a pro-Axis front. No charges were ever brought against him. Mills was later cleared of any wrongdoing by a judicial panel, but received no compensation for his imprisonment.

In Parliament in March 1944 Robert Menzies, then leader of the opposition, later Australia's longest-serving Prime Minister, said "I happen to know him quite well..... he was hauled out of his home, imprisoned and put in an internment camp..... his association, so I am informed, with the Australia First Movement amounted to this: some man who had secured appointment with the movement wrote to him and asked him to subscribe, and he forward 10s 6d. as a subscription..... I know this man and I know something of the disaster which this has brought upon him..... Here is a man who for twenty-odd years was building up a practice as a professional man. He was taken out of his home, just as anybody might be. He was incarcerated in circumstances of immense notoriety. When he came out, what happened? His friends were gone, his practice gone, his reputation was gone."

The Anglecyn Church of Odin

Mills' articulation of Odinism is quite different in flavour to some modern tendencies within Odinism. In his liturgical text, The First Guide Book to the Anglecyn Church of Odin of 1936, Mills gives a version of the Ten Commandments that is only slightly different from that in Exodus and Mill's formulary includes vigils, hymns, evensong and communion[8], making it abundantly clear that Mills based the liturgy of the Anglecyn Church of Odin on that of the Anglican Church[9]. However, while textually there is a debt to Christian worship, philosophically Mills expresses strong anti-Christian sentiments throughout:

"…the Christian religion is, in one phase at least, a form of Jewish propaganda, as well as a condemnation of ourselves"[10]

"…in the Christian religion its doctrines and outlook has been personified and adorned with stories calculated to appeal to a certain weakness of man"[12] .

Anti-Jewish comments can likewise be found scattered throughout the Guide Book.

"…the Jews, generally speaking, recognise the degradation and disintegration of the peoples under Christian culture, and by its direction or otherwise, have hopes of ruling over such peoples…and because Jews try to hasten the process by using the many powers in their control"[13].

"… many Jewish Leaders have deemed it an intellectual conquest of other peoples, [if they persuade] other races to forget their own race and Lords, and at the same time induce them to…self –renunciation (take-the-lowest-seat)…making such persons and nations unworthy to live and only fit to be ruled, before their extinction"[14].

"…in our newspapers, colleges, wireless and the like news-services (even when not directly controlled Jews [sic])…the word 'Jew' is only spoken with circumspection…"[15]

"Freemasonry has]been seriously affected by reason of the pervading Jewish culture, which war against our national and racial identity…and the Jewish racial spirit…and the denial of our own"[16]

While Mills' vision of what Odinism involves is still being re-explored and re-evaluated by modern Odinists, nevertheless Mills prefigures many of the concerns of Germanic pagans today - the morally and culturally corrosive effects of "Judeo-Christianity"[11], the importance of Eugenics and breeding programmes[17], the linking of individual with national vitality[18], the fall from grace of the White Race by being untrue to the spirit of their forefathers[18], valourisation of heroism[19], the intrinsic healthiness of freedom of heterosexual expression[20] and so on.

He was also the author of The Odinist Religion: Overcoming Jewish Christianity (circa 1939). In 1957, Mills released his last book, The Call of our Ancient Nordic Religion

Part of this article consists of modified text from Wikipedia, and the article is therefore licensed under GFDL.
Retrieved from "http://en.metapedia.org/m/index.php?title=Alexander_Rud_Mills&oldid=463472"
Categories: