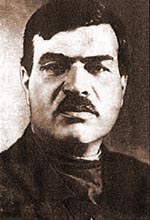 Yurovsky was born as the eighth of ten children in a Jewish family of trades-people in Tomsk.[2]

He was a rudimentary watchmaker in Perm and sometime photographer, but had lived for a while in the Germany in 1904. After returning to Perm the following year during the Russian Revolution (1905), he joined the Bolsheviks. Arrested several times over the years, he became a devoted Communist.

Upon the outbreak of The Great War Yurovsky was called up in the ambulance corps and was at the front in the ranks of the 698th (Perm) Regiment. He was in the Carpathian retreat and had played an eloquent part in the meetings of mutinous soldiers. His activity as a militant Bolshevik was noticed by the leaders at the Smolny and they dispatched him back to the Ural region of his youth. His travel orders had come directly from the Kremlin and were signed by Jakob Sverdlov.[3]

His manner and behaviour were ruthless.

Execution of the Imperial Family

The Regional Soviet of the Urals, including the Jews Filipp Isayevich Goloshchyokin, Piotr Lazarevitch Voikov[4] and Yakov Yurovsky, as well as Nikolai Tolmachyov, Alexey Georgievich Kabanov, Adolf Karlovitch Lepa, Boris Didkovsky, the half-Polish half-Armenian Georgy Safarov, Piotr Zakharovitch Ermakov, Gladunov and Talmatchev, refused a request from Nikolai Bukharin to transfer the Tsar and his family to Moscow. Instead they drew up a murderous indictment saying they "consider it absolutely necessary to liquidate him.....his family must be liquidated at the same time". Another person present at the reading of the indictment was Abulov, a delegate from the front. His superior officer, R. I. Berzin (1899-1939)[5], a Cheka officer, had given the green light to the Ural Soviet for the liquidation of the Romanovs. The Regional Executive Committee nominated Golochtchekin, Voikov and Yrovsky to direct the operation. The indictment and other details was then sent to the Central Executive Committee of Soviets in Moscow for approval. This approval was given by Sverdlov and Grigory Zinoviev by coded telegram from the Kremlin.[6] 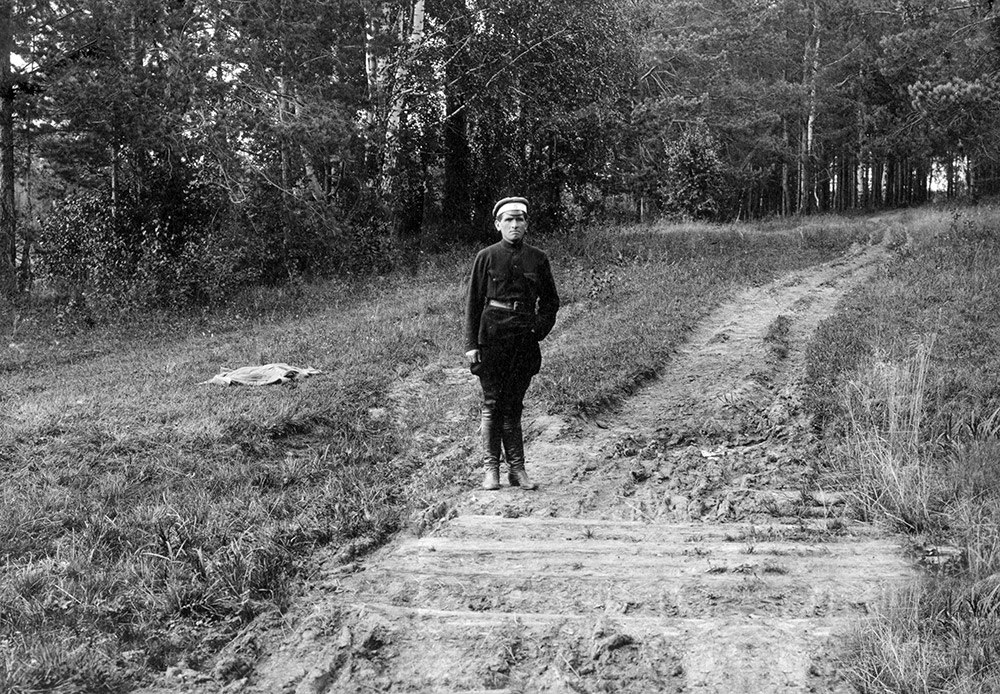 Pyotr Ermakov stands over the exact spot where the Tsar's remains were buried. Photo is 1920.

On the night of 16-17 July, 1918, a squad of Bolsheviks led by Yurovsky executed Russia's last Emperor, Tsar Nicholas, along with his wife Empress Alexandra Fyodorovna of Hesse, their four daughters, Olga, Tatiana, Maria, and Anastasia, and their son Alexei. Along with the family, four servants, their butler, cook, valet and Lady-in-Waiting were also murdered at the same time. All were shot in a half-cellar room (measured to be 25 feet x 21 feet) of the merchant Ipatiev's house in Yekaterinburg, a city in the Urals region, where they were being held prisoner. The execution squad comprised three more local Bolsheviks and seven soldiers. The latter were said to be Hungarian prisoners-of-war who, as Communists, had joined the Red Army and were serving in the 1st Kamishlov Rifle Regiment. They didn't speak Russian and spoke with Yurovsky in German. It was said they were chosen because the local Cheka feared that Russian soldiers would not shoot the Tsar and his family.

In a detailed report of the killings prepared in 1934 and held in the Soviet Union's archives, Yurovsky stated that he had shot the Tsar and his son himself, while his comrades killed the other members of the royal family. The killings were said to have been botched by the firing squad; the bullets failed to kill the family, and the jewelry sewn into the daughters' clothes acted as bullet proof vests. The daughters were finished off with close range shots to the head, after attempts to bayonet them also failed. Recently, it has been discovered that Yurovsky himself killed Grand Duchess Tatiana Nikolaevna of Russia with a single bullet through the back of her head.

To prevent the development of a cult for the dead Tsar, the bodies were removed to the countryside. The bodies of Nicholas and his family were long believed to have been disposed of down a mineshaft at a site called the Four Brothers. Initially, this was true; they had indeed been disposed of there on the night of 17 July. The following morning, when rumors spread in Yekaterinburg regarding the disposal site, Yurovsky removed the bodies and concealed them elsewhere. When the vehicle carrying the bodies broke down on the way to the next chosen site, he made new arrangements and buried most of the bodies in a sealed and concealed pit on Koptyaki Road, a since-abandoned cart track 12 miles north of Yekaterinburg.

On 30 July 1918 the White Army took Ekaterinburg. The Impatiev House is searched and a number of relics found. Some Red Army men, minor participants in the crime, are arrested. Others have escaped. The first report of the tragedy was made by Nicholas Sokolov, an Examining Magistrate who had joined the White Army, appointed by Admiral Kolchak on February 5th to investigate the murders of the Imperial Family. He meticulously investigated the murders, questioned all the witnesses and photographed hundreds of documents. He also recovered some of the Tsar's own negatives in wooden boxes, and packed his evidence and glass-plate negatives into crates. With the defeat of the White armies and the betrayal and murder of Admiral Kolchak, Sokolov fled east in early 1920 to Omsk, Chita, and Harbin in Manchuria. General Janin, Head of the French Military Mission, who had betrayed Kolchak, agreed to look after the three cases and he took them back to France. Sokolov died of a heart attack in Salbris, France, on 23rd November 1924. In his published Memoirs he said he was never able to recover his cases. These were finally discovered in the attic of a Russian antique dealer and bibliophile in Paris, M.I.Gurvich, still bearing the an old yellow label in Russian Cyrillic "N. Sokolov". This first report and its archives are the basis of the 1966 book by Victor Alexandrov.[7]

After the Civil War

After the Russian Civil War, Yurovsky worked as a Chief of the Soviet State Treasury (GosHran), where he achieved a reputation for combating corruption and theft. He died in 1938 from a ruptured peptic ulcer.