Wilhelm Max Müller (in the US sometimes Muller; 15 May 1862 – July 1919) was a German American Orientalist, anthropologist, archaeologist, lexicographer, author and professor for Egyptology. He was not a son of Friedrich Max Müller, as wrongly claimed in some Internet articles (as of 2022). 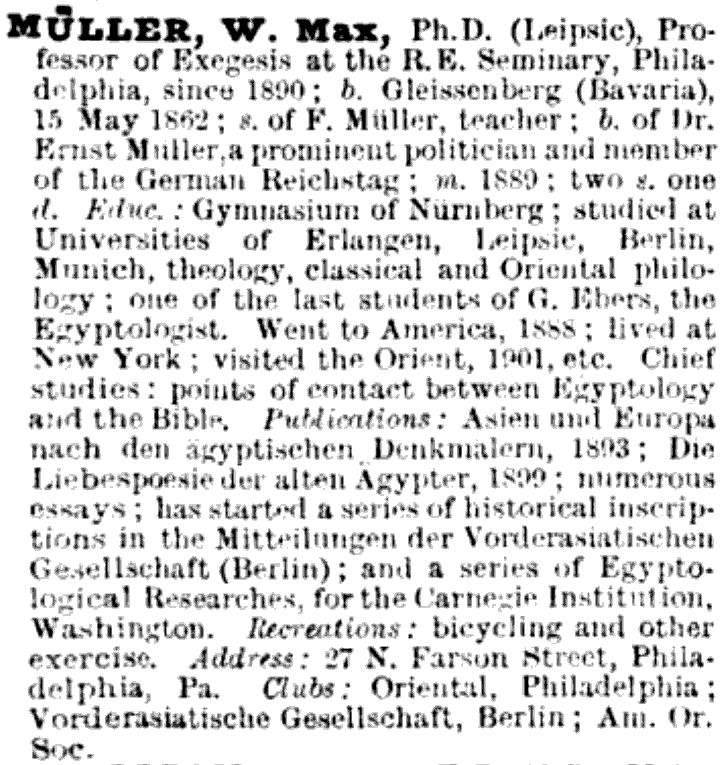 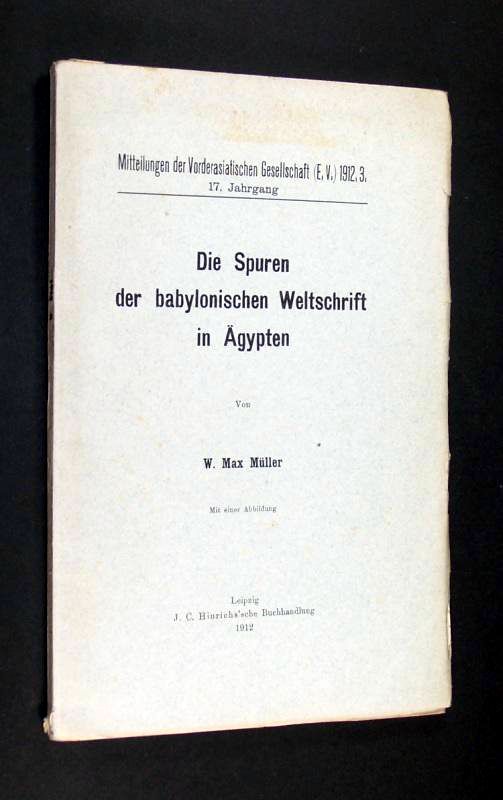 Müller accomplished his Abitur at the Gymnasium in Nürnberg. Afterwards, he studied at the universities of Erlangen, Leipzig, Berlin and Munich, obtaining the degree Ph.D. at Leipzig in 1885. He was one of the last students of the renowned German Egyptologist Prof. Dr. phil. habil. Georg Moritz Ebers (1837–1898). Since 1888 he has been a resident of the United States and worked as a German language teacher at a Berlitz language school in New York, where he met his future wife.

Arranged by German Assyriologist Hermann Volrath Hilprecht (1859 –1925), he became Professor of Bible Exegesis (Hebrew, Greek and Latin; German: Biblische Exegese und hebräische Lexikographie) in the Reformed Episcopal Seminary at Philadelphia from 1890 until his death and was appointed some years later as assistant professor of Egyptology at the University of Pennsylvania. He had undertaken researches repeatedly in Epypt (1904, 1906 and 1910) under the auspices of the Carnegie Institution. He purchased papyri in Egypt for the University Museum.

As a result of the support received by Prof. Ebers and German Egyptologist and lexicographer Prof. Dr. phil. Johann Peter Adolf Erman (1854–1937), Müller became one of the first contributors to the "Orientalische Literaturzeitung" in 1898. He wrote articles for the 1911 Encyclopædia Britannica. Articles attributed to this author are designated in EB1911 by the initials "W. M. M". He was also a contributor to the Encyclopædia Biblica and the Jewish Encyclopædia. After 1905 he served as joint editor of the Gesenius Hebrew Dictionary. He wrote on the identification of Keftiu and concluded that it could not be Phoenicia. He was member of the 1842 founded "American Oriental Society" (AOS), of the 1888 founded "Oriental Club of Philadelphia", one of the oldest continuously-active academic clubs in the United States, and of the "Vorderasiatische Gesellschaft zum Zweck der Förderung der vorderasiatischen Studien auf Grund der Denkmäler" in Berlin. He loved all kinds of sport, espeially swimming and fishing, he was also a true lover of music.

Prof. Dr. phil. died 1919 during one of his long swims in the North Atlantic along the shore of Wildwood.

It was common for the Egyptian noblemen in ancient times to live 110 years, but it has remained until now for the real secret of their longevity to be revealed by Professor W. Max Muller, of the University of Pennsylvania. Professor Muller says that papyrus scripts discovered along the Nile and hieroglyphic inscriptions on the walls of chambers in the pyramids show that it was the custom of the noblemen of Egypt’s palmy days to have their numerous wives tickle their feet and to drink one hundred jars of beer a day. The professor adds that the joyous sensation of having his feet tickled by a lot of wives may have been an important factor in lengthening a nobleman’s life. He fails to give specific credit to the consumption of one hundred jars of beer a day, perhaps because the size of the Egyptian beer jar is not announced, nor the proportion of froth to real beer in its contents. Editor’s Note: I checked to see whether Professor Muller took this advice to heart and had his feet tickled by “a lot of wives” and therefore lived a long life. Sadly, that did not occur, as the July 13, 1919 New York Times headline told the tale of his untimely demise at age 57:

DR. W. MAX MULLER DROWNED IN SURF
Noted Egyptologist Is Seized with Cramps While Bathing at Wildwood, N.J.
HEADED MANY EXPEDITIONS
Author and Professor at University of Pennsylvania
Was Sent to Egypt by Carnegie Institute[3]

Max was the son of Friedrich Justus Müller (1830–1893) from Brunnau, Volksschule[4] teacher in Gleißenberg, Mühlhof and Nürnberg. His mother was Pauline, née Barthel (1837–1917). His younger brother was Dr. jur. Ernst Müller (1866–1944),[5][6] since 1898 Müller-Meiningen, who would become Bavarian Minister of Justice, President of the Senate at the Bavarian Supreme Court and member of the Reichstag.

Müller married on 13 April 1889 his German-American fiancée Bettie Graßel (Graßl) from New York City. They had two children: Max Ernest and Pauline, who was named after his mother.