The tragedy of the Brothers von Blücher

The Brothers von Blücher (German: Gebrüder von Blücher) were a trio of German brothers and Fallschirmjäger of the Luftwaffe who fell as heros in combat within hours of the same day on 21 May 1941 during the fierce Battle of Crete. Their struggle and death are symbolic for the bravery of German Wehrmacht soldiers during World War II. 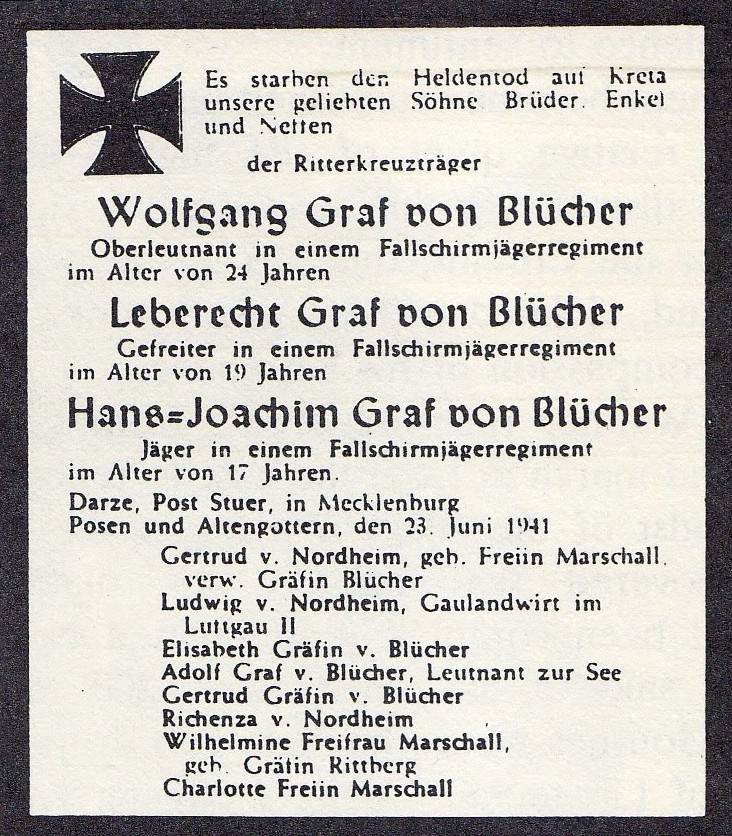 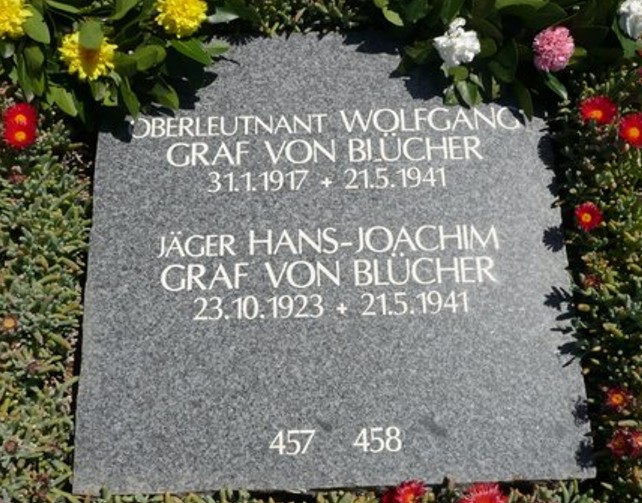 The Brothers von Blücher were prominent among the German dead, their ancestor was the famous German-Prussian Field Marshal (Generalfeldmarschall) Gebhard Leberecht von Blücher[1], the hero of the Waterloo.

The first to fall on this warm day in May 1941 was youngster Hans-Joachim Graf von Blücher (Graf = Count), who was attempting to resupply his brother, Oberleutnant (First Lieutenant) Wolfgang Graf von Blücher[2], with ammunition when the latter and his platoon were surrounded by members of the British Black Watch. The 17-year-old Hans-Joachim, who had arrived early morning with the second wave of paratroopers on his first active deployment, had commandeered a horse, which he attempted to gallop through British lines. The talented equestrian almost reached his brother's position, and in fact was shot before his brother's very eyes.

24-year-old platoon commander Wolfgang and his men of the Fallschirmjägerregiment 1, who had arrived with the first wave and hopelessly surrounded, were at last out of ammunition. The rest of their platoon was overrun by British armoured vehicles and killed of around midday.

Wolfgang’s younger brother, the 19-year-old Leberecht Graf von Blücher, had also arrived with the second wave. He was reported killed in action on the same day but his body was never recovered.

Four weeks later the mother, Gertrud (Freiin Marschall) von Nordheim (widowed Gräfin von Blücher), who had lost her husband in 1924, was informed, that three of her four sons were killed on the same day in the Battle of Crete. Her forth son, Adolf Graf von Blücher, was released from duty and left the German navy (Kriegsmarine), to take care of the agricultural firm at home. Tragically he also died 1944 from a gunshot wound while stalking deer with a large hunting party in the vast forests of Mecklenburg.

In 1974, Wolfgang and Hans-Joachim were reunited in a single grave at the German War Cemetery on a hill behind the airfield at Maleme, Crete, which was newly inaugurated on 6 October in the presence of the brother’s sister Gertrud Freifrau von Ketelhodt and hundreds of guests from Germany. Because Leberecht’s body was never retrieved or identified, his name is on a plaque of honor (German: Ehrentafel) for the unknown fallen close to the grave of his brothers. Gertrud’s own sons carry the names of her brothers.

For years afterward, Cretan villagers reported seeing a ghostly rider galloping at night down a road near the spot where the young Fallschirmjäger Hans-Joachim Graf von Blücher was shot; yet until they were told the story of the German von Blücher brothers, they had assumed that the ghostly rider was British.