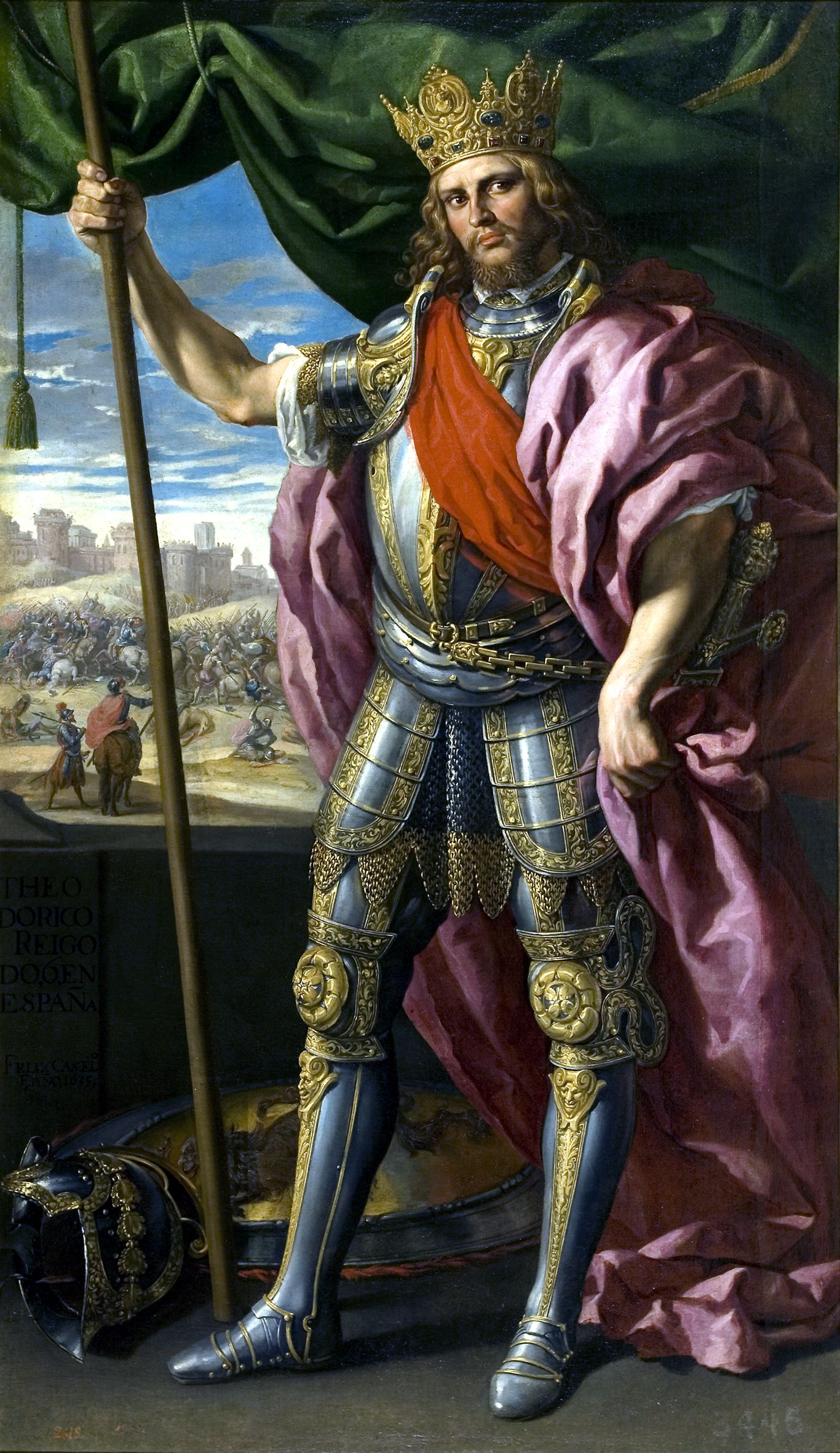 Theoderic the Great (German: Theoderich der Große); He was allied with the Germanic tribes of the Franks, Vandals, and the Burgundians, mainly through his relatives marrying Kings of the other Germanic peoples.

The Empire of the Goths under Theoderic the Great around 523 A.D.

Theoderic the Great (454 – 30 August 526; sometimes referred to as Theodoric; Latin: Flavius Theodoricus; German: Theoderich der Große or as a hero of German legend in mythical tales Dietrich von Bern) was King of the Germanic Ostrogoths (474–526), King of Italy (493–526), reigned over the Visigoths (511–526), and a viceroy of the Eastern Roman Empire. His Gothic name Þiudareiks translates into "people-king" or "ruler of the people".[1]

Theodoric was born in 454 in Pannonia (what is now known as Hungary) on the banks of the Lake Neusiedl (German: Neusiedler See) near Carnuntum as the son of King Theodemir or Thiudimer, a Germanic nobleman of the Amali, and his wife Ereleuva. This was just a year after the Ostrogoths had thrown off nearly a century of domination by the Huns. Theoderic went to Constantinople as a young boy in 459, as a hostage to secure the Ostrogoths' compliance with a treaty Theodemir had concluded with the Byzantine Emperor Leo (ruled 457–474). He lived as a hostage at the court of Constantinople for roughly 10 years and learned a great deal about Roman government and military tactics within his studies (also of poetry and arithmetic[2]), which served him well when he became the Gothic ruler of a mixed but largely Romanized "barbarian people".

He returned to his homeland in 469/470[3] where his father, now king of the Ostrogoths, gave him the title of "Heerkönig" (king of the armies). He then assumed leadership over the Gothic regions previously ruled by his uncle, Valamir. In 474 (other sources claim 475), when he was 30 or 31 years old, Theoderic became king of the Ostrogoths after the death of his father. Ostrogoths were now liviving in the region of what is now called "Macedonia", were his father had moved them to. Theoderic, although, moved his Gothic federation (foederati) back to the shores of the Danube. In 476/477, Zeno allied himself with Theoderic against their common rival and Theoderic's relative Theodoric (or Theoderic) Strabo, who had rebelled against Zeno and killled Heraclius. When Theodoric Strabo died in 481 Theoderic of the Amali took over his Allegiance including all warriors.

Byzantine Emperor Zeno (ruled 476–491) subsequently gave Theoderic the title of Patrician and the office of Magister militum (master of the soldiers) in 481, and even appointed him as Roman Consul in 484. Seeking further gains, Theoderic frequently ravaged the provinces of the Eastern Roman Empire, eventually threatening Constantinople itself.

In the same year, Emperor Zeno ordered Theoderic to overthrow the German Foederatus Odoacer, who had likewise been made patrician and even King of Italy, but who had since betrayed Zeno, supporting the rebellious Leontius. Theodoric arrived in Italy in late August 489. After a victorious three-year war, Theoderic killed Odoacer with his own hands, settled his 100,000 to 200,000 people in Italy, and founded an Ostrogothic Kingdom based in Ravenna.

Theodoric led the Ostrogothic invasion of Italy (supported by elements of the East Germanic Rugii). During the course of four years of fighting, the invasion swept away Odoacer's Post-Imperial Romano-Gothic kingdom. In its place Theodoric created an Ostrogothic kingdom which held much of Italy until Byzantium began a re-conquest of the western empire in southern Italy. Despite the fact that the invasion had been devised by Emperor Zeno, the Ostrogoths ruled independently, and Theodoric and Zeno addressed each other as equals. Overtures to Byzantium were only made by some Ostrogoth leaders after Theodoric's death. A Roman consul was given nominal authority, and the two peoples lived together amicably, with Roman culture partially influencing the Germanics.

The Goths took one-third of the land while the Romans retained the rest. Each side observed their own laws, and intermarriage between Roman and Goth was forbidden. One area in which they didn't agree was in Christianity. The Ostrogoths were confirmed Arians, which the Catholics of the Roman Church found hard to stomach. Not all the Ostrogoths pursued this path into Italy and eventual Italianisation. A branch known as the Tauric Ostrogoths ventured further eastwards, ending up in Crimea by the end of the 5th century. They settled in the region and established an Eastern Germanic Gothic principality, later known as Doros. Additionally, some elements of the Gothic peoples in southern Germany formed part of the Bavarii confederation at the start of the 6th century.

Seeking to restore the glory of Ancient Rome, he ruled Italy as part of the now Extended Empire of Germania in its most peaceful and prosperous period since Valentinian, until his death in 526. From this period of history until 1806 Europe was under control of the Germanic peoples, a powerful federal state to be known as the Holy Roman Empire of the German Nation. Memories of Theoderic's reign made him a hero of German legend as "Dietrich von Bern".