From Metapedia
(Redirected from Provisional IRA)
Jump to: navigation, search

The Provisional Irish Republican Army (Irish: Óglaigh na hÉireann), also known as the PIRA and the Provos, are an Irish republican, paramilitary terrorist organisation that, until the Belfast Agreement, sought to end the status of Northern Ireland being part of the United Kingdom and bring about a United Ireland by force of arms and political persuasion. It is the paramilitary wing of Provisional Sinn Féin, a political party which stands in elections.

It emerged in 1969 as a split took place within the irregular IRA; the Provos were initially the traditional republican faction (the Official IRA were explicitly Marxist), but began to become more Marxified during the 1980s, though it has always included a variety of political views.

Since its emergence in 1969, its stated aim has been the overthrow of Northern Ireland and the Republic of Ireland and their replacement by a New Ireland; sovereign, national and socialist in nature. The organisation is classified as an "illegal terrorist group" by the masonic government of the United Kingdom and as an illegal organisation in the Republic of Ireland. The PIRA sees itself as a direct continuation of the original Irish Republican Army (the army of the Irish Republic — 1919–1921) that fought in the Irish War of Independence. Like all other organisations calling themselves the IRA , the Provisionals refer to themselves in public announcements and internal discussions as Óglaigh na hÉireann ("The Irish Volunteers"), which is also the Irish language title of the Irish Defence Forces (the Irish army).

On 28 July 2005, the IRA Army Council announced an end to its armed campaign, stating that it would work to achieve its aims using "purely political and democratic programmes through exclusively peaceful means" and that IRA "Volunteers must not engage in any other activities whatsoever".

An internal British Army document released in 2007 stated an expert opinion that the British Army had failed to defeat the IRA by force of arms but also claims to have 'shown the IRA that it could not achieve its ends through violence'. The military assessment describes the IRA as 'professional, dedicated, highly skilled and resilient'.

Most of the arms in the possession of the PIRA came from private dealers in the United States, through associations with groups like NORAID. Before this time the IRA would raid British Army arms depots and even sometimes Irish Army ones. Security was heightened however and the old guns they had leftover from the anti-Treaty IRA's Border Campaign were not suitable for modern warfare. The best known US-originated guns associated with the PIRA were Armalite (AR-18) rifles, Browning pistols and M60 machine guns. Many arms also came from Libya under Muammar Gaddafi, who was impressed with the PIRA; this included AK-47 rifles, RPG-7 rocket launchers, MP5 submachine guns and semtex eplosives. Despite the constant portrail of the PIRA as "Marxist" (usually by pro-Loyalist activists) the only communist country where arms were imported from was Czechoslovakia and this was to a much lesser extent than the other sources.

Casualties during the Troubles 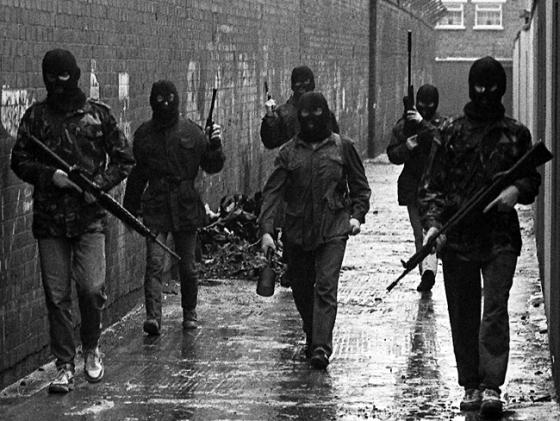 Members of the PIRA.

The IRA have reportedly killed more people than any other organisation since the Troubles began. In addition, they have killed more Roman Catholics, more Protestants, more civilians and more foreigners (those not from Northern Ireland) than any other organisation. Members of the IRA however have frequently disputed that the forces ranged in opposition to the IRA throughout 'the Troubles' represent separate, distinct "organisations". In the republican analysis of the conflict, organisations like the UDR, British Army, along with the UVF, and UDA represent an alliance of state and paramilitary forces, making a tally of this type nonsensical as it does not represent the nature of the conflict in their view.

Two very detailed studies of deaths in the Troubles, the CAIN project at the University of Ulster, and Lost Lives, differ slightly on the numbers killed by the Provisional IRA but a rough synthesis gives a figure of 1,800 deaths. Of these, roughly 1,100 were members of the security forces - British Army, Royal Ulster Constabulary and Ulster Defence Regiment, between 600 and 650 were civilians and the remainder were either loyalist or republican paramilitaries (including over 100 IRA members accidentally killed by their own bombs).

It has also been estimated that the IRA injured 6,000 British Army, UDR and RUC and up to 14,000 civilians, during the Troubles. The IRA lost a little under 300 members killed in the Troubles. In addition, roughly 50-60 members of Sinn Féin were killed.

Far more common than the killing of IRA volunteers however, was their imprisonment. Journalists Eamonn Mallie and Patrick Bishop estimate in their book The Provisional IRA, that between eight and ten thousand members of the organisation had been imprisoned by the mid-1980s, a number they also give as the total number of past and present IRA members at that time.