Pornography is sexually explicit material, proliferated in the form of images, writings and films. It began to enter the culture of Europe at an gradual level during the rise of Renaissance humanism, but its modern more explicit commerical form came to the fore in the 19th century. It was for the most part an underground and illegal fetish until the late 1960s after the Sexual Revolution, when Denmark became the first country to legalise it in 1969. Some differentiate between artistic nude works and crude explicit pornography. 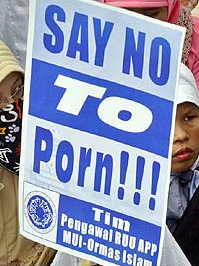 Indonesian women hold up banner in protest against filth.

Previously in the West, there were widespread anti-obscenity laws. These were broken down gradually in the first half of the 20th century by Jews in the United States, various social liberals and others of a cosmopolitan disposition. Laws of this kind are still in place in many Muslim countries, China and some African countries where such perversions are not tolerated, but since the advent of the internet it has become more difficult to stop widespread access to the most illict pornography. There have been some legal successes in Europe in recent times, as pornography was banned in 2009 in the Ukraine.