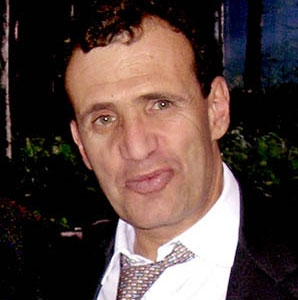 Chaim Zabludowicz (born 6 April 1953), better known as Poju Zabludowicz, is an influential Zionist Jew, arms dealer and rich buisnessman operating primarily in the United Kingdom and basing his company in Liechtenstein, though he himself was born in Finland. He is the owner of the investment group Tamares. He was listed on the Sunday Times Rich List 2009 and was ranked as the 18th wealtheist person in the United Kingdom, with an estimated fortune of £1,500 million.

He is the chairman of the Britain Israel Communications and Research Centre (BICOM), which lobbies the British government on behalf of the Zionist agenda. His Jewish father, Shlomo Zabludowicz, was associated with the Israeli arms dealer Soltam. Zabludowicz and his wife Anita Zabludowicz are also known for their degenerate art collection (especially those associated with Tracy Emin). Located in a former Methodist church, one of sculpture denigrates Jesus Christ by portraying him with an erect penis.

Zabludowicz donated £15,000 to David Cameron in his campaign for the leadership of the Conservative Party, against David Davis.