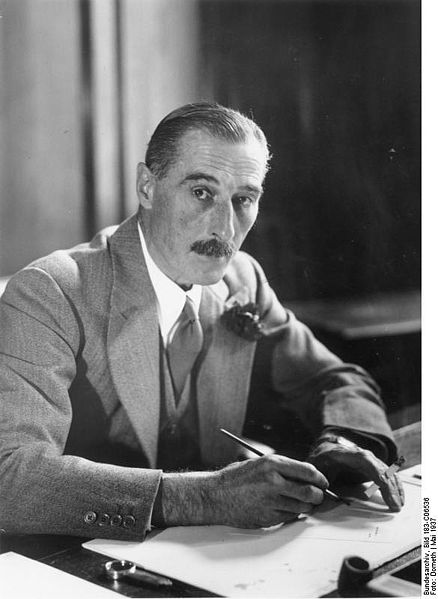 Sir Nevile Meyrick Henderson, (June 10, 1882 – December 30, 1942) was the Ambassador of Great Britain to Germany from 1937 to 1939. He believed that Adolf Hitler could be influenced by Britian and pushed toward cooperation with the Western powers.

Henderson was ambassador at the time of the Munich Agreement over Czecho-Slovakia, and at the time of the union with Austria, and counselled Neville Chamberlain to enter into the former and to accept the latter. Shortly thereafter, he returned to London for medical treatment, returning to Berlin in ill-health in February 1939 (he would die of cancer less than four years later).[1]

While advising British accommodation for Germany's territorial claims over Danzig & Memel as well as an extra-territorial autobahn connecting Germany with East Prussia across West Prussia which was now part of Poland, it was ultimately Henderson who was presented with the task of delivering the ultimatum on the morning of September 3, 1939 to Hitler stating that if hostilities between Germany and Poland did not cease by 11 a.m. that day, a state of war would exist. This was clearly impossible to fulfil for Germany at that time. Germany did not respond, and Prime Minister Neville Chamberlain declared war at 11:15 a.m.

After returning to London, Henderson wrote a book, Failure of a Mission: Berlin 1937-1939, published in 1940. In it, he spoke highly of some members of the German government, including Hermann Göring. In contrast, he was not complimentary about Joachim von Ribbentrop.

Before his term in Germany, Henderson served as Envoy Extraordinary and Minister Plenipotentiary to the Kingdom of Yugoslavia between 1929 and 1935,[2] where he was in close confidence to King Alexander and Prince Paul. Henderson was on friendly terms with the members of the Astors' Cliveden set, which also supported the appeasement of Hitler, and whose member was Prince Paul of Yugoslavia. Henderson wrote in his memoirs how eager Alexander was to show him his military plans to counter the Mussolini's projected attack on Dalmatia, when the main body of the Italian Army has been sent overseas.[3]

Part of this article consists of modified text from Wikipedia, and the article is therefore licensed under GFDL.
Retrieved from "http://en.metapedia.org/m/index.php?title=Nevile_Henderson&oldid=399764"
Categories: