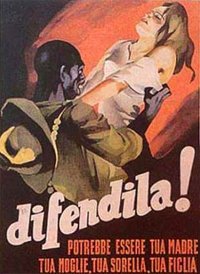 Poster made by Gino Boccasile in 1944 as an advert from the Italian Social Republic to defend and hide the women from colonialist troops. The caption states: "Protect, this can be your mother, your wife, your sister, your daughter".

Marocchinate (Italian for "those given the Moroccan treatment" i.e. "women raped by Moroccans") is a term applied to women who were victims of the mass rape and killings committed during World War II after the Battle of Monte Cassino in Italy. These were committed mainly by the Moroccan Goumiers, colonial troops of the French Expeditionary Corps (FEC).

Monte Cassino was captured by the Allies on May 18, 1944. The next night, thousands of Goumiers and other colonial troops scoured the slopes of the hills surrounding the town and the villages of Ciociaria (in South Latium). Italian victims associations alleged that 60,000 women, ranging in age from 11 to 86, suffered from violence, when village after village came under control of the Goumiers. Civilian men who tried to protect their wives and daughters were murdered. The number of men killed has been estimated at 800.[1] In fact, due to incomplete reports of the crimes, a precise account is impossible.[2]

The mayor of Esperia, a comune in the Province of Frosinone, reported that in his town, 700 women out of 2,500 inhabitants were raped resulting in many deaths. According to Italian victims associations, a total of more than 7,000 civilians, including children, were raped by Goumiers.[3]

Part of this article consists of modified text from Wikipedia, and the article is therefore licensed under GFDL.
Retrieved from "http://en.metapedia.org/m/index.php?title=Marocchinate&oldid=422231"
Categories: