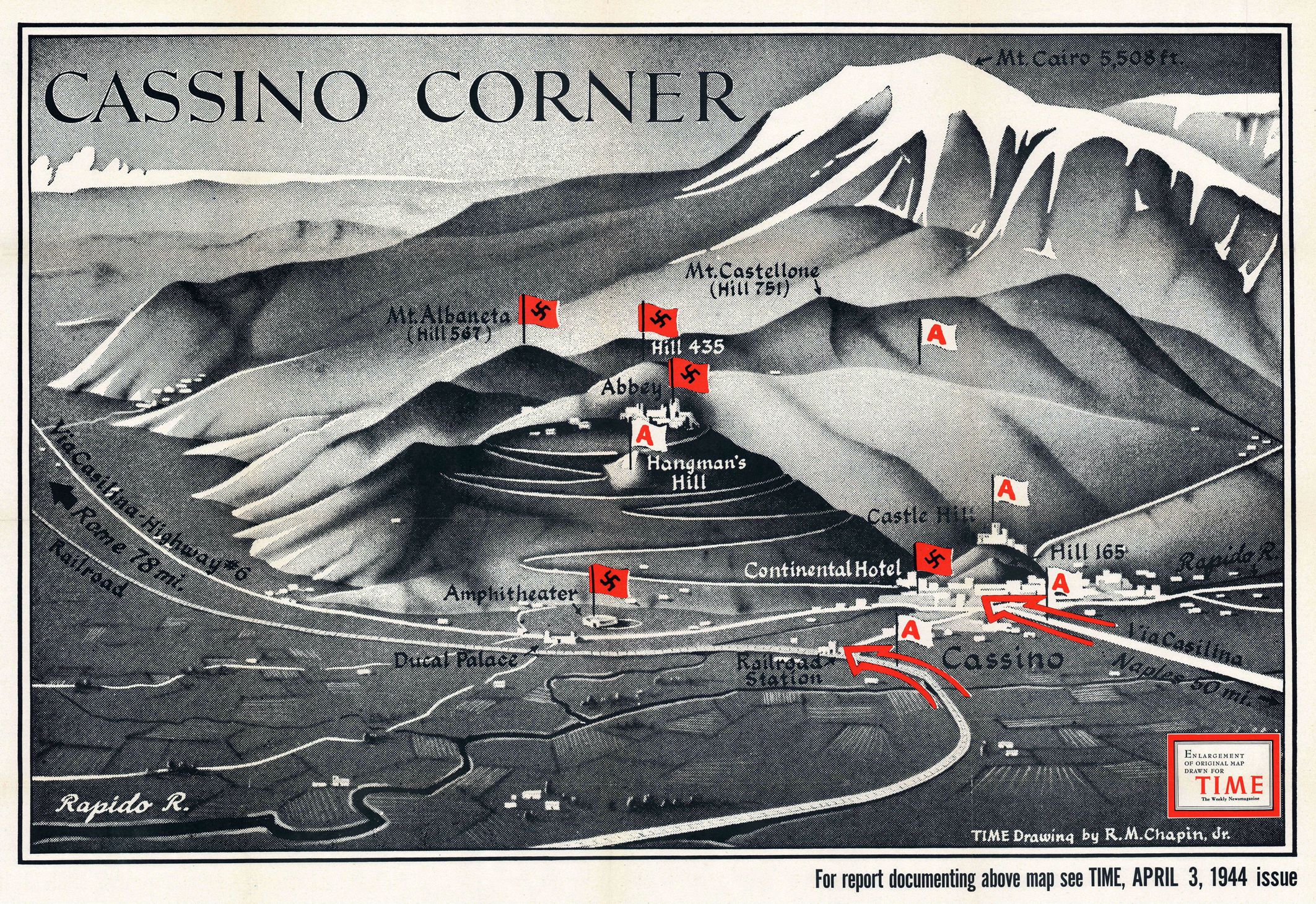 The Battle of Monte Cassino (also known as the Battle for Rome and the Battle for Cassino) was a costly series of four battles during World War II, fought by the invasion forces of the Allies with the intention of breaking through the Winter Line and seizing Rome from 17 January until 18 May 1944. 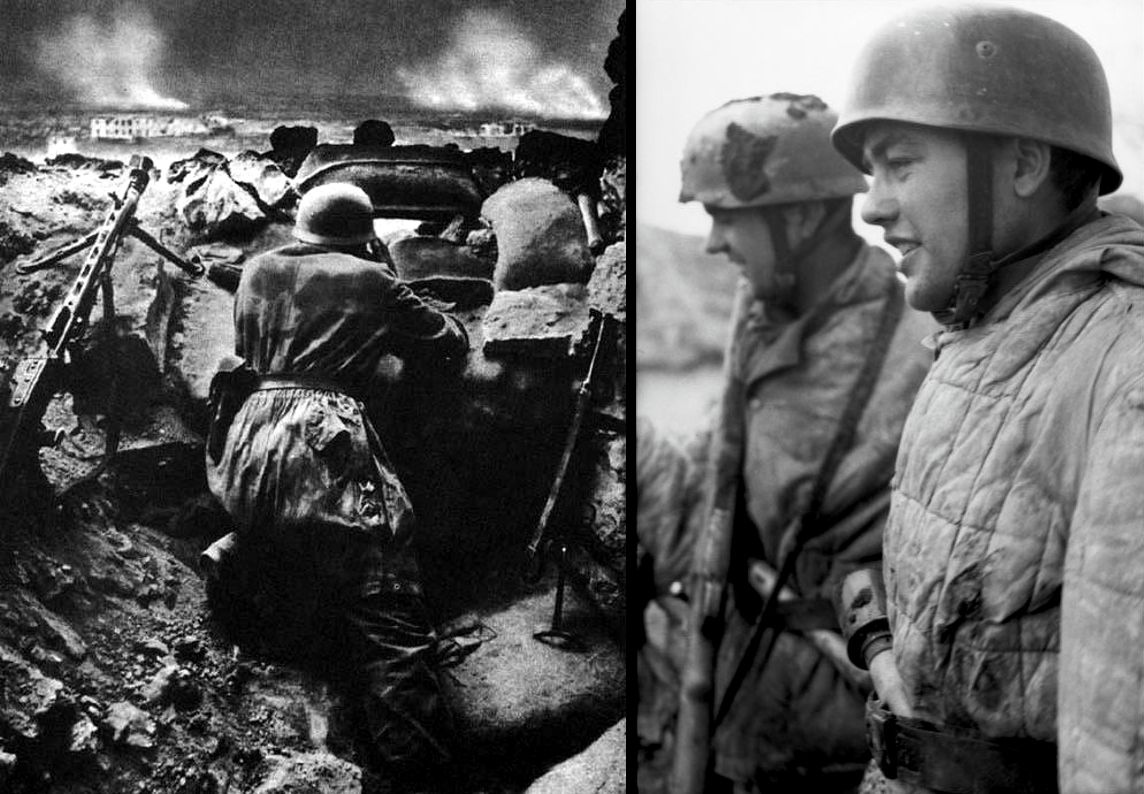 Brave, death-defying German paratroopers with small weapons were the last line of defence 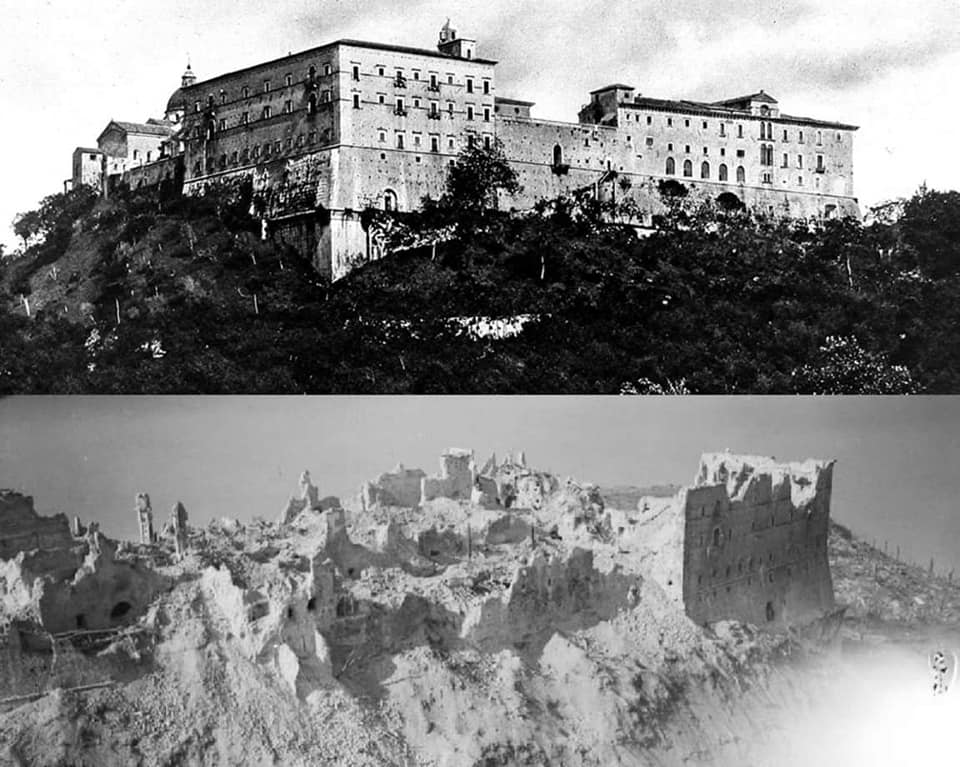 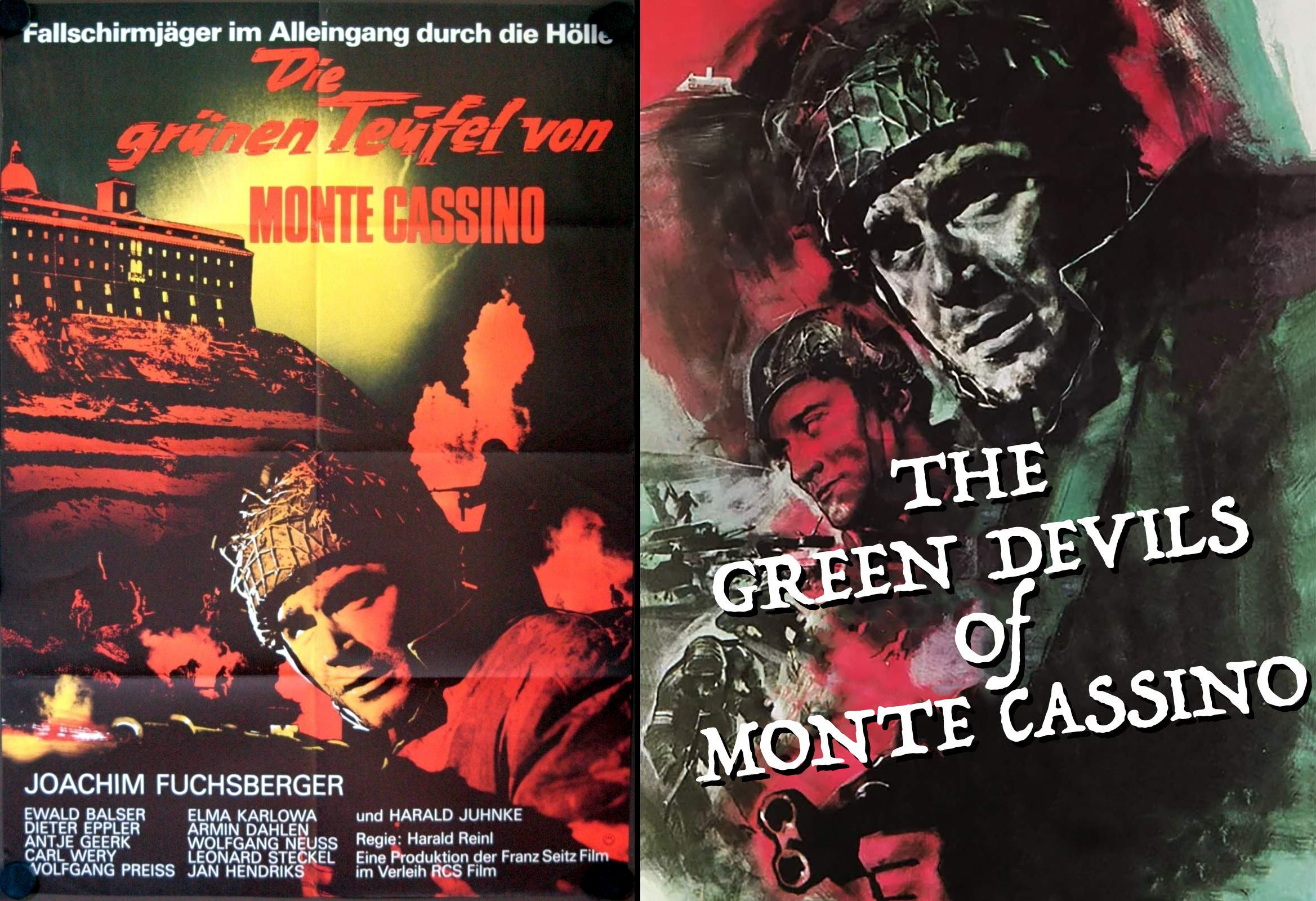 The Allied invasion of Italy in September 1943 (de) by two Allied armies commanded by General Sir Harold Alexander, Commander-in-Chief Allied Armies in Italy, were followed by an advance northward on two fronts, one on each side of the central mountain range forming the "spine" of Italy. On the western front, the U.S. 5th Army, commanded by Lieutenant-General Mark W. Clark, moved from the main base of Naples up the Italian "boot" and in the east General Sir Bernard Montgomery's British 8th Army advanced up the Adriatic coast.

5th Army made slow progress in the face of difficult terrain, wet weather and skillful German defenses. The Germans were fighting from a series of prepared positions in a manner designed to inflict maximum damage, then pulling back and so buying time for the construction of the Winter Line defensive positions south of Rome. The original estimates that Rome would fall by October 1943 proved much too optimistic.

Although in the east the Winter Line had been breached on the British 8th Army's Adriatic front and Ortona was captured, the advance had ground to a halt with the onset of winter blizzards at the end of December, making close air support and movement in the jagged terrain impossible. The route to Rome from the east using Route 5 was thus excluded as a viable option leaving the routes from Naples to Rome, highways 6 and 7, as the only possibilities; highway 7 (the old Roman Appian Way) followed along the west coast but south of Rome ran into the Pontine Marshes which the Germans had flooded. Highway 6 ran through the Liri valley. Dominating the south entrance to this valley was the hill mass behind the town of Cassino. Excellent observation from the peaks of several hills allowed the German defenders to detect Allied movement, prevent any advance northward, and direct artillery fire on Allied units. Running across the Allied line of advance was the fast flowing Rapido River which rose in the central Apennine mountains, flowed through Cassino and across the entrance to the Liri valley (where the Liri joined the Rapido) after which its name changed to the River Garigliano (often referred to as the "Gari" by the Allies) and it continued to the sea. With its heavily fortified mountain defenses, difficult river crossings (not only was the river fast flowing, but the Germans had temporarily diverted the Rapido at the head of the valley so as to flood the valley bottom and make conditions underfoot most difficult for any attackers), Cassino formed a linchpin of the Gustav Line, the most formidable line of the defensive positions making up the Winter Line.

Because of the historical significance of the Benedictine monastery, in December 1943, the German commander-in-chief in Italy, Field Marshall Albert Kesselring, ordered German units not to include the monastery itself in German defensive positions, and informed the Allies accordingly. Controversy exists regarding the extent to which this order was followed.

Some Allied reconnaissance aircraft reported seeing German troops inside the monastery. The monastery had excellent observation of the surrounding hills and valleys, and thus was a natural site for German artillery observers. What is clear is that once the monastery was destroyed the Germans occupied it and made use of the rubble to build defensive positions. Ultimately, however, the military arguments leading to the monastery's destruction rested on its potential threat (real or imagined) rather than its actual state of occupation.

In the beginning of 1944, the western half of the Gustav Line was being anchored by Germans holding the Rapido, Liri and Garigliano valleys and certain surrounding peaks and ridges, but not the historic abbey of Monte Cassino, founded in AD 524 by St. Benedict, although they manned defensive positions set into the steep slopes below the abbey walls. On February 15 the monastery, high on a peak overlooking the town of Cassino, was destroyed by American B-17, B-25, and B-26 bombers. The bombing was based on the fear that the abbey was being used as a lookout post for the Axis defenders (this position evolved over time to admit that Axis military was not garrisoned there). Two days after the bombing, German paratroopers poured into the ruins to defend it. From January 17 to May 18, the Gustav defenses were assaulted four times by Allied troops. These operations resulted in casualties of over 55,000 Allied (another 60,000 wounded) and 20,000 German soldiers.[1]

There was a final destruction on 15 February 15 1944 when, during the Battle, the entire building was pulverized in a series of heavy air-raids due to the mistaken belief it was a German stronghold. In fact the Abbey was being used as a refuge from the battle by the women and children of nearby Cassino.

In May 1944 Allied forces bombed and shelled the sixth-century abbey of Monte Cassino to rubble, forcing the German defenders there to withdraw. Among the Allied troops was a division of Moroccan soldiers. Even then the Allies wanted to have “diversity” among their forces in order to show the world that they believed in racial equality. Well, the Moroccans weren’t much as fighters, but they were pretty good at cutting the throats of prisoners after the fighting was over. And they also excelled at raping civilians — and prisoners too, occasionally, buggery being an established tradition among them. The night after the Germans had withdrawn, the Moroccans — 12,000 of them — left their camp and swarmed over the mountain villages around Monte Cassino. They raped every village woman and girl they could get their hands on, an estimated 3,000 women, ranging in age from 11 years to 86 years old. They murdered 800 village men who tried to protect their women. They abused some of the women so badly that more than 100 of them died. They selected the prettiest girls for gang-raping, with long lines of dark-skinned Moroccans waiting their turn in front of each one, while other Moroccans held the victims down. And they raped some of the young men as well.[2]