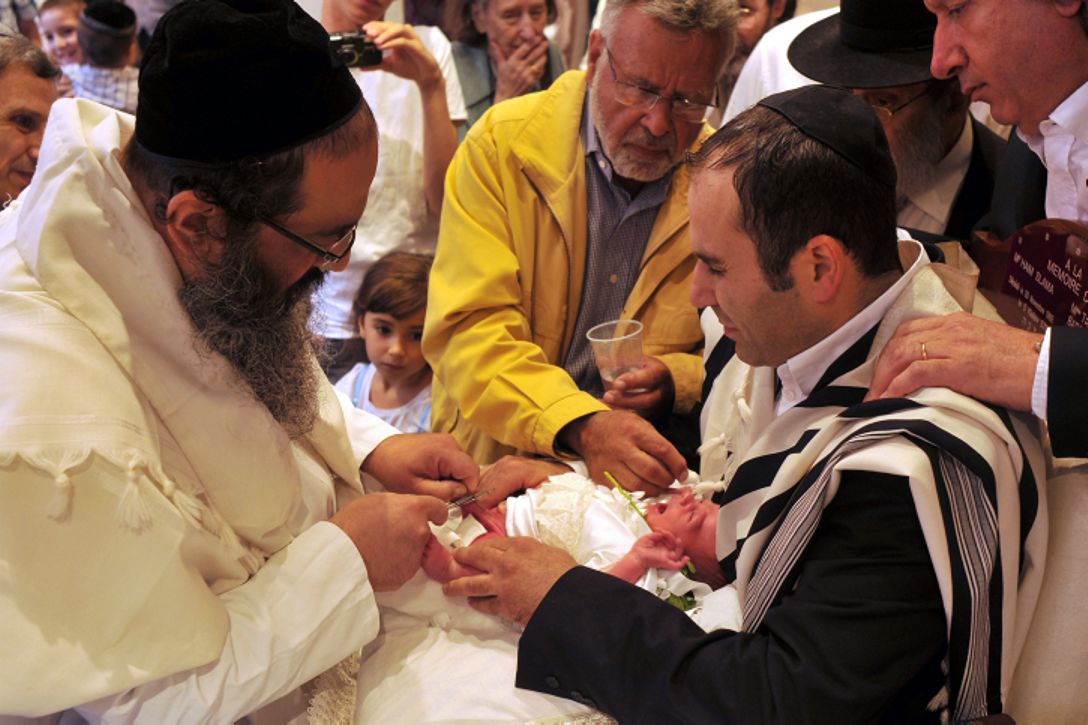 Jews, as do Muslims, practice ancient genital mutilation (circumcision), even in the twenty first century.

Circumcision is the most common form of genital mutilation. Male genital mutilation (MGM) comprises all procedures involving partial or total removal of the external male genitalia or other injury to the male genital organs whether for cultural, religious or other non-therapeutic reasons.[1] Three national medical organizations (Iceland, Sweden and Germany) have called for infant male circumcision to be banned, and two others (Denmark and the Netherlands) have said they’d support a ban if they didn’t think it would drive the practice underground.

The earliest recorded accounts are in ancient Egypt, but the practice goes back before recorded history. Anatomist and hyperdiffusionist historian Grafton Elliot Smith has found evidence it to be to be over 15,000 years old.[2][3]

In the United States, even with experienced medical care that ancient people did not have, 1 in every 500,000 baby boys die from male circumcision.[4] The amount of US-American males circumcised after the United States joined the side of the jews in WWII – and imported large amounts of them to run the media, government, education and healthcare systems – increased immensly. Newborns are circumcised without anesthetic.[5]

The modern propaganda reasons for it are claims of health reasons and claims it makes people behave more morally.[6] The health claims is a lie promoted by jewish doctors. The foreskin actually boosts immune function and protects the body from pathogens. Circumcision has been proven to cause both erectile dysfunction and premature ejaculation.[7] The older Judaism reason was an offering to their god. But for the ancient Egyptian reason, as the Dogon tribe of Africa gives, they view the foreskin as feminine and the clitoris as masculine, so they remove each. Why they don't remove male nipples is unknown.[8]

While common propaganda encourages male genital mutilation and shames female circumcision, they are both very similar. They remove both tissue and 70,000 nerve endings.[7] The male result is the tip of the penis is less protected and more easily chaffed. The male experiences less sexual pleasure, has no natural lubricant, and is to some extent numb at the tip. Studies have found uncircumcised men are better lovers;

“Respondents overwhelmingly concurred that the mechanics of coitus were different for the two groups...73 percent [of the women] reported that circumcised men tended to thrust harder and deeper, using elongated strokes, while unaltered men thrust more gently, to have shorter thrusts and tended to be in contact with the mons pubis and the clitoris more.”[9][10][11][12]

Circumcised men lose feeling in the tip of the penis after a period of time, due to a process called keratinization. The foreskin was meant to protect the tip from frequent contact. Without the protection of the foreskin, the tip is unprotected and over time, loses sensitivity. With foreskin protection, the penis remains sensitive, which equates to more feeling. Women also are extremely more likely to have orgasms with an uncircumcised man because the foreskin acts as a massager for the vagina, creating more sensations for the woman while decreasing the chance of female dryness. Despite the added sensation, uncut men last just as long, if not longer than circumcised men.[13] Women are often only averse to foreskin at first because it is unusual compared to what they're used to seeing, but they prefer it afterward.[14] Just like with males, female circumcision removes only the tip of the clitoris because the full clitoris goes entirely through her groin and woman are still able to have orgasms, just with reduced sensation like with circumcised men.[15]

In Israel, if you refuse to allow genital mutilation on your son, the court fines you $150 each day you refuse.[17]

In 2012, European Jewish leaders said Germany's circumcision ban was the "worst attack on Jews since the Holocaust."[18] The proposed ban is not of circumcision, but of circumcision of children. The only people that are against informed consenting men being able to decide for themselves whether or not they should be circumcised, are the people that would take that choice away from them. No one complained when female circumcision was made illegal, even though some people regard it as their religious right or duty to cut (mutilate) their daughters. It’s illegal to cut off a girl’s prepuce, or to make any incision on a girl’s genitals, even if no tissue is removed. Even a pinprick is banned.

In 2018 a 'citizen proposal' in Denmark calling for a ban on male circumcision - as practiced in Judaism and Islam - collected more than 50,000 signatures and was debated in the Danish Parliament. Those proposing the ban on male circumcision argue that the practice involves the mutilation of healthy children, that it is not compatible with the Hippocratic Oath and that it should be criminalised in the same way that female genital mutilation already has been. “Routine” circumcision is banned in public hospitals in Australia.