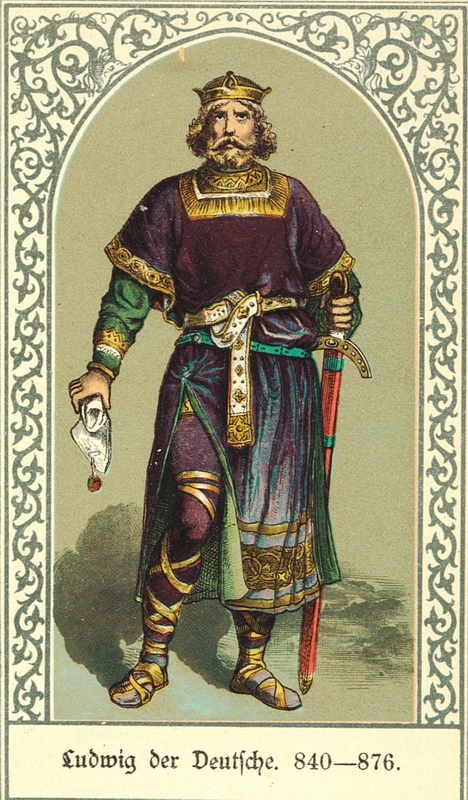 Louis the German (German: Ludwig der Deutsche), also known as Louis II or Louis the Bavarian (806 – 28 August 876), was the third son of the emperor Louis the Pious (German: Ludwig der Fromme) and his first wife, Ermengarde of Hesbaye. He was the King of Bavaria from 817, when his father (King of Frankia, then Roman emperor) partitioned the empire, and King of Eastern Francia from the Treaty of Verdun in 843 until his death.

His early years were partly spent at the court of his grandfather, Charlemagne, whose special affection he is said to have won. When the emperor Louis divided his dominions between his sons in 817, Louis received Bavaria and the neighbouring lands, but did not undertake the governing of such until 825, when he became involved in wars with the Wends and Sorbs on his eastern frontier. In 827, he married Emma of Altdorf, sister of his stepmother Judith of Bavaria, and daughter of Welf, whose possessions ranged from Alsace to Bavaria. Louis soon began to interfere in the quarrels arising from Judith's efforts to secure a kingdom for her own son Charles (later known as Charles the Bald) and the consequent struggles of his brothers with their father.

His involvement in the first civil war of his father's reign was limited, but in the second, his elder brothers, Lothair, then King of Italy, and Pepin, King of Aquitaine, induced him to invade Alamannia — which their father had given to their half-brother Charles — by promising to give him the land in the new partition they would make. In 832, he led an army of Slavs into Alamannia and completely subjugated it. Louis the Pious disinherited him, but to no effect; the emperor was captured by his own rebellious sons and deposed. Upon his swift reinstatement, however, the Emperor Louis made peace with his son Louis and restored Bavaria (never actually lost) to him (836).

In the third civil war (began 839) of his father's ruinous final decade, Louis was the instigator. A strip of his land having been given to the young Charles, Louis invaded Alamannia again. His father was not so sluggish in responding to him this time and soon the younger Louis was forced into the far southeastern corner of his realm, the March of Pannonia. Peace had been made by force of arms.

The later years of Louis the German were troubled by risings on the part of his sons, the eldest of whom, Carloman, revolted in 861 and again two years later; an example that was followed by the second son Louis, who in a further rising was joined by his brother Charles. In 864, Louis was forced to grant Carloman the kingdom of Bavaria, which he himself had once held under his father. The next year (865), he divided the remainder of his lands: Saxony he gave to Louis the Younger (with Franconia and Thuringia) and Swabia (with Raetia) to Charles, called the Fat. A report that the emperor Louis II was dead led to peace between father and sons and attempts by Louis the German to gain the imperial crown for Carloman. These efforts were thwarted by Louis II, who was not in fact dead, and Louis' old adversary, Charles the Bald.

Louis was preparing for war when he died on August 28, 876 at Frankfurt. He was buried at the abbey of Lorsch, leaving three sons and three daughters. His sons, unusually for the times, respected the division made a decade earlier and each contented himself with his own kingdom. Louis is considered by many to be the most competent of the grandsons of Charlemagne. He obtained for his kingdom a certain degree of security in face of the attacks of Norsemen, Magyars, Slavs, and others. He lived in close alliance with the Church, to which he was very generous, and entered eagerly into schemes for the conversion of his heathen neighbours.