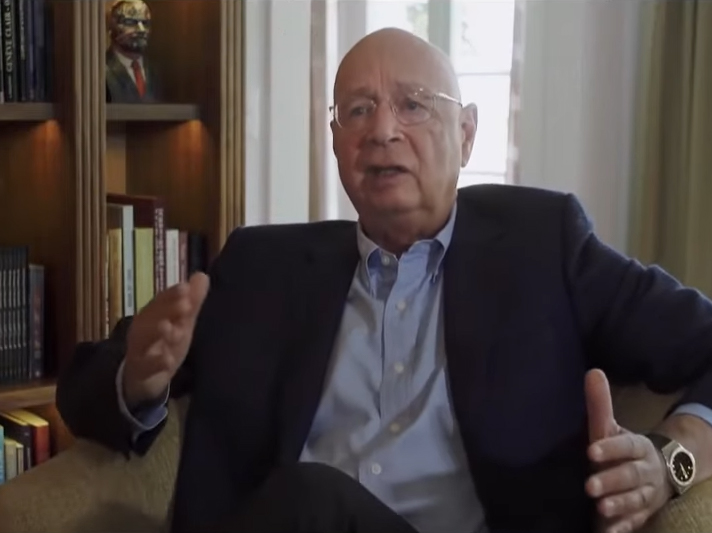 Professor Dr.-Ing. Dr. rer. pol. Dr. h. c. mult.[1] Klaus Schwab with a statue of Lenin on his bookshelf.[2] He is author of the annual Global Competitiveness Report (since 1979), numerous articles and several books. His latest books are The Fourth Industrial Revolution (2016), a worldwide bestseller translated into 30 languages, Shaping the Fourth Industrial Revolution (2018), COVID-19: The Great Reset (2020) and Stakeholder Capitalism (2021).

Klaus Martin Schwab (b. 30 March 1938 in Ravensburg, Württemberg, Deutsches Reich) is a German engineer and economist best known as the founder and executive chairman of the World Economic Forum. The WEF is most famous for its annual meeting in Davos-Klosters, Switzerland, which attracts leading business, government, and civil society leaders from around the world. 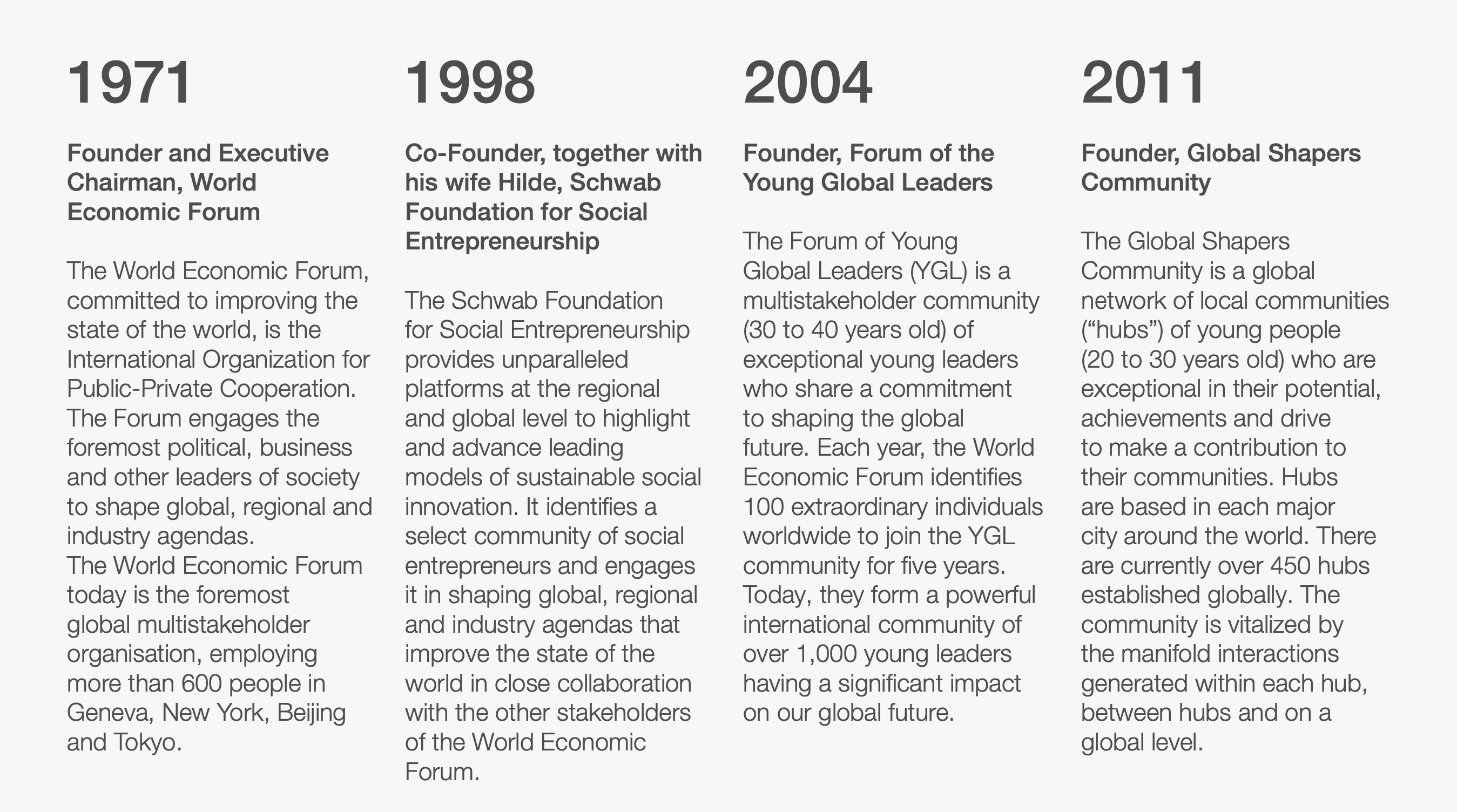 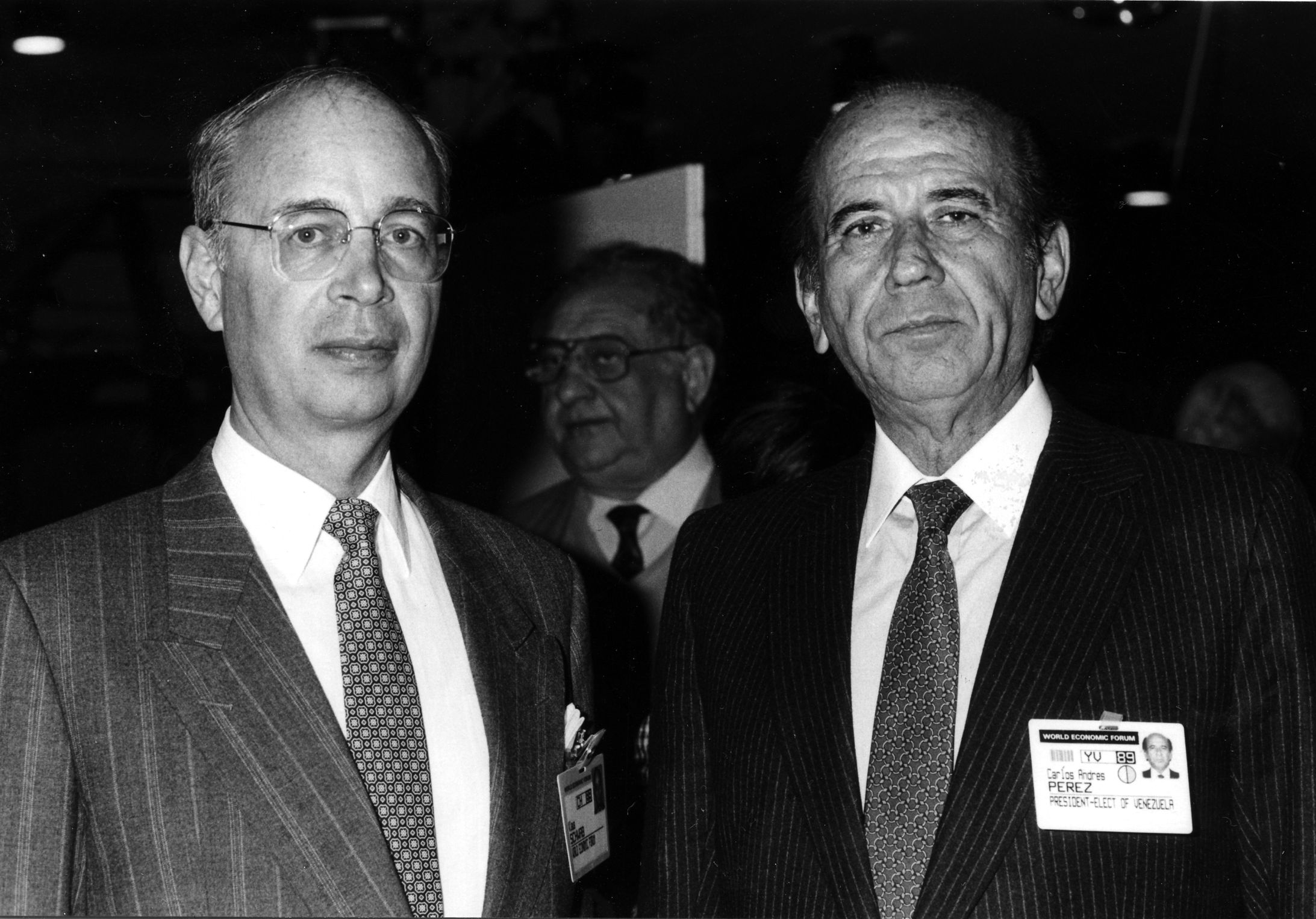 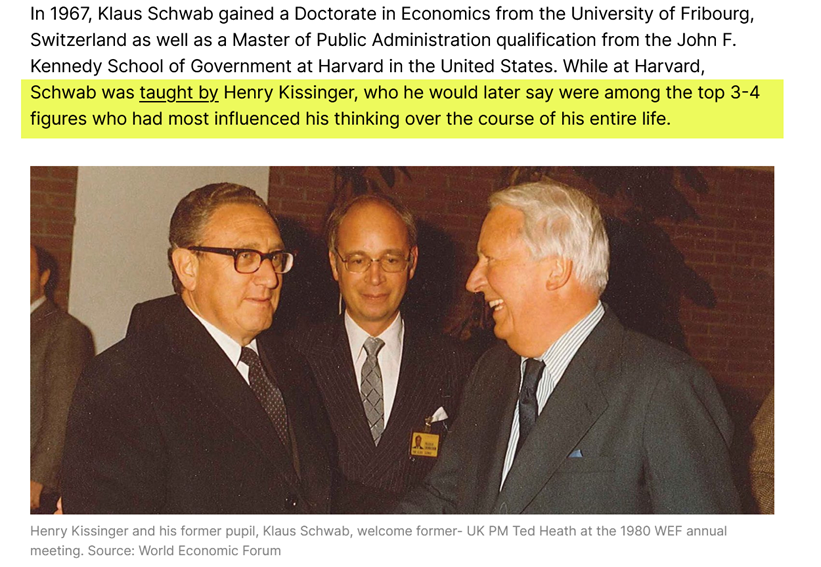 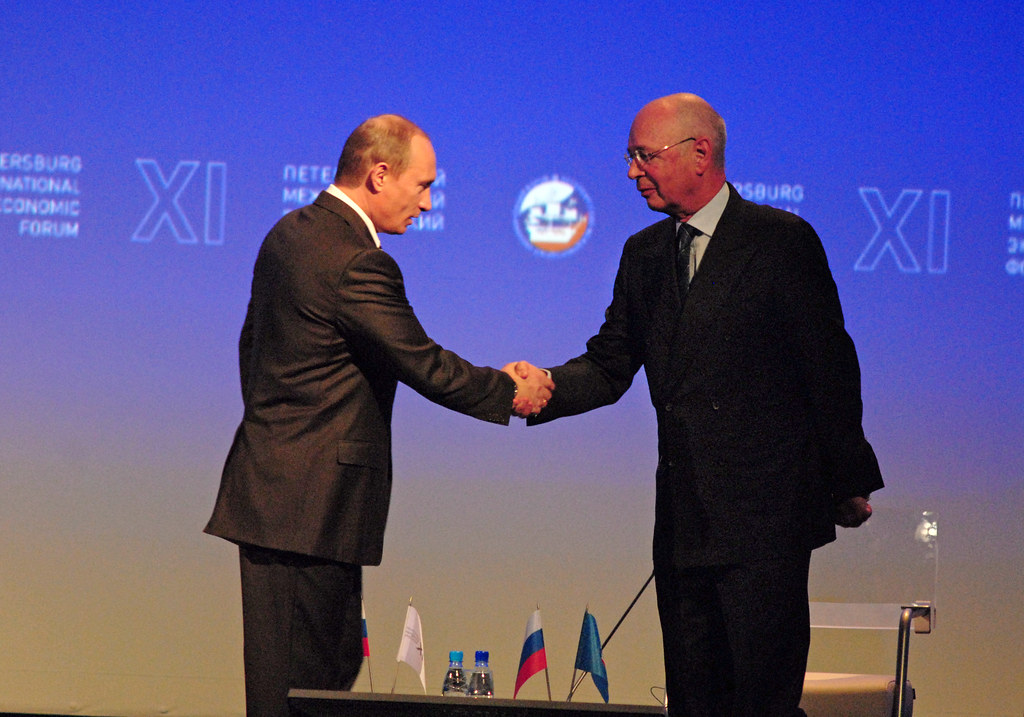 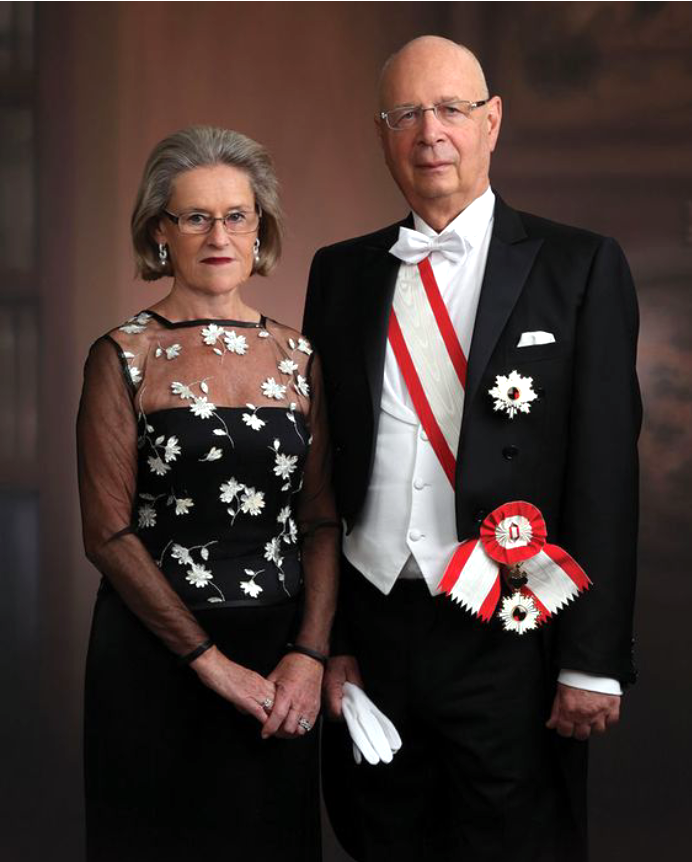 Father Eugen Schwab had drummed into his son that "if he wants to make a difference in the world, he should do an apprenticeship as a mechanical engineer". But this was only to be the beginning of Schwab's extensive training. Between 1949 and 1957 Klaus attended the Spohn-Gymnasium in Ravensburg, which he graduated with Abitur. Between 1958 and 1962, Klaus worked for various engineering firms and in 1962 completed his mechanical engineering studies at the Swiss Federal Institute of Technology (ETH) in Zurich with an engineering degree. In the following year he also completed an economics degree at the University of Fribourg, Switzerland. From 1963 to 1966, Klaus worked as an assistant to the general director of the Association of German Mechanical and Plant Engineering (VDMA) in Frankfurt. In 1966, Klaus received his doctorate from ETH Zurich with a dissertation on the subject: "Long-term export credit as a business management problem in mechanical engineering."

Professor Klaus Schwab was born in Ravensburg, Germany in 1938. He is Founder and Executive Chairman of the World Economic Forum, the International Organization for Public-Private Cooperation. He founded the Forum in 1971, the same year in which he published Moderne Unternehmensführung im Maschinenbau (Modern Enterprise Management in Mechanical Engineering). In that book, he argued that the management of a modern enterprise must serve not only shareholders but all stakeholders (die Interessenten), to achieve long-term growth and prosperity. Schwab has championed the multistakeholder concept since the Forum’s inception, and it has become the world’s foremost platform for public and private cooperation. Under his leadership, the Forum has been a driver for reconciliation efforts in different parts of the world, acting as a catalyst of numerous collaborations and international initiatives. In 1998, with his wife Hilde, he created the Schwab Foundation for Social Entrepreneurship, which seeks to identify, recognize and disseminate initiatives in social entrepreneurship that have significantly improved people’s lives and have the potential to be replicated on a global scale. The Foundation supports a network of over 350 social entrepreneurs around the world. In 2004, with the financial contribution received as part of the Dan David Prize, he established a new foundation: the Forum of Young Global Leaders (for leaders under 40). Seven years later, in 2011, he created the Global Shapers Community (for potential leaders between the ages of 20 and 30). The purpose of the two foundations is to integrate young people as a strong voice for the future into global decision-making processes and to encourage their engagement in concrete projects that address social problems. Schwab has encouraged the establishment of communities providing global expertise and knowledge for problem-solving. Among them is the Network of Global Future Councils, the world’s foremost interdisciplinary knowledge network dedicated to promoting innovative thinking on the future. The Forum employs over 700 people, with its headquarters in Geneva, Switzerland, and additional offices in New York, San Francisco, Beijing and Tokyo. An engineer and economist by training, Professor Klaus Schwab holds doctorates in Economics (summa cum laude) from the University of Fribourg, in Engineering from the Swiss Federal Institute of Technology, and a Masters of Public Administration from the Kennedy School of Government at Harvard University. In 1972 he became one of the youngest professors on the faculty of the University of Geneva. He has received numerous international and national honours. His latest books are The Fourth Industrial Revolution (2016), a worldwide bestseller translated into 30 languages, and Shaping the Fourth Industrial Revolution (2018). During the course of his wide-ranging career, Schwab has received numerous honours. He holds 17 honorary doctorates, and national medals of honour, including the Grand Cordon of the Order of the Rising Sun of Japan, the Grand Cross with Star of the National Order of Germany and the Knight of the Légion d’Honneur of France. He was also knighted by Queen Elizabeth II – Knight Commander of the Order of Saint Michael and Saint George (KCMG). Outside his work, he has a broad range of academic, cultural and public service interests. He is a regular swimmer, mountain walker and an enthusiastic participant in the Engadin Ski Marathon.[3]

Schwab as publisher of the World Economic Forum's 2010 "Global Redesign" report postulates that a globalized world is best managed by a self-selected coalition of multinational corporations, governments (including through the UN system), and select civil society organizations (CSOs).[4] He argues that governments are no longer "the overwhelmingly dominant actors on the world stage" and that “the time has come for a new stakeholder paradigm of international governance”. The WEF's vision includes a "public-private" UN, in which certain specialized agencies would operate under joint state and non-state governance systems.[5]

Schwab is a locational German name, first given to someone who lived in the medieval dukedom of Swabia in southwest Germany, now Baden-Württemberg and Bavaria. This region took its name from the first century BCE Germanic tribe given the Latin name Suebi or Suevi. Schwab family history was first recorded in Franconia and Mecklenburg and includes Ulrich Schwab, the first Count of Nemerow. Variations on the spelling include Schwab, Schwebel, and Swab. German American Schwab genealogy began around 1700 in Pennsylvania and includes financier Charles Schwab.

Klaus' grandfather Jakob Wilhelm Gottfried Schwab (1870–1928), a mechanical engineer, was born in Karlsruhe (Grand Duchy of Baden) and married Marie Lappert (b. 17 September 1875 in Kirchberg, Burgdorf, BE, Switzerland) in 1898 in Roggwil, where they lived for a short while. Father Eugen Wilhelm Schwab was born there but raised in Karlsruhe and would become, like his father, a loyal subject of Friedrich II, the last Grand Duke of Baden. He became Managing Director, Escher Wyss & Cie. [Co.] ca. 1930 (interlocked with Sulzer AG, Andritz AG, Stoll and Festo AG) and continued with the company as President Emeritus until his death in 1982. He was Vice- President and President of the Ravensburg Chamber of Commerce and Industry (1958–1982), he was also officer of the Ravensburg Rotary.

Eugen and Emma divorced, some say shortly after Klaus' birth. His father married Erika Epprecht (31 December 1906 in Zurich). Some sources state, Emma left Eugen before having Klaus, this would mean, Erika was his mother, but this cannot be proven. In his 2021 published book Stakeholder Capitalism, Klaus wrote on the dedication page: “To my parents, Eugen Wilhelm Schwab and Erika Epprecht, who taught me firsthand the value of education, collaboration, and the stakeholder principle”. Eugen and Erika would (also) become son Prof. Dr. Dr. Urs Rainer (12 March 1941; d. 19 December 2021 in Chur). Emma Gisela also married again, for a third time, to Dr. Heinrich Kohring.

In 1971, Schwab married his fiancée Hilde, née Stoll (b. 1947 in Aarburg). They have two children: Olivier Martin, born in 1973, and Nicole C., born in 1975. Hilde, chairperson and co-founder of the Schwab Foundation for Social Entrepreneurship, World Economic Forum Geneva, is honorary citizen of the municipality of Davos since 1999 and became Chevalier de la Légion d'honneur (Knight) in 2021.

Joined husband Klaus Schwab in 1970 as first collaborator in the organization known today as the World Economic Forum. In 1998, together with her husband, created and endowed the Schwab Foundation for Social Entrepreneurship to provide social entrepreneurs with a platform where they can engage global business and political leaders to solve social and environmental challenges. The Schwab Foundation has today a global network of over 350 leading social innovators. Has been instrumental in infusing a cultural, social and environmental spirit into the Forum’s activities, including the co-creation of the “Crystal Awards” to honour outstanding artists from across the world. Serves on the advisory boards of a number of organizations, including International Bridges to Justice, Global Dignity and La Chartreuse de Neuville. 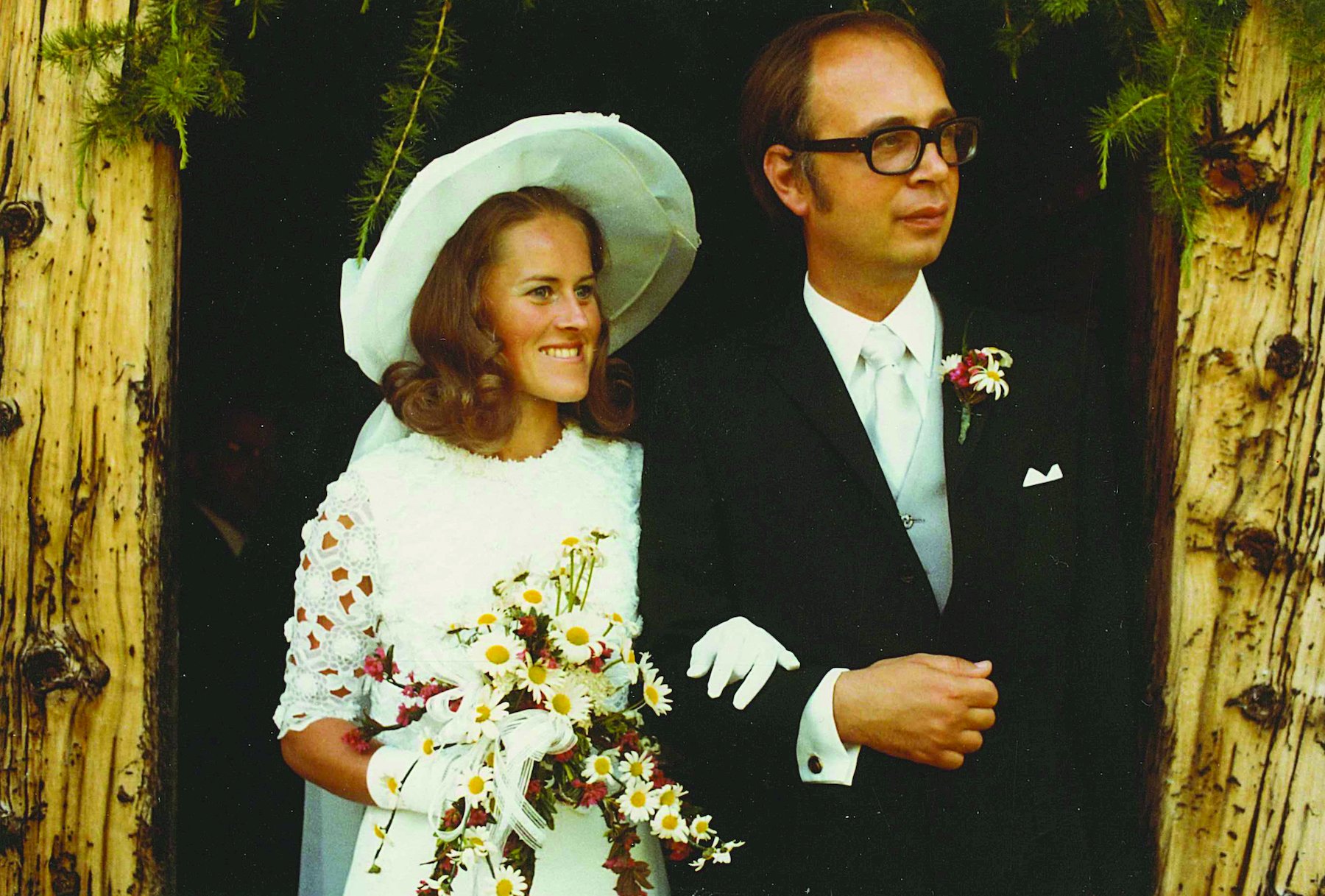