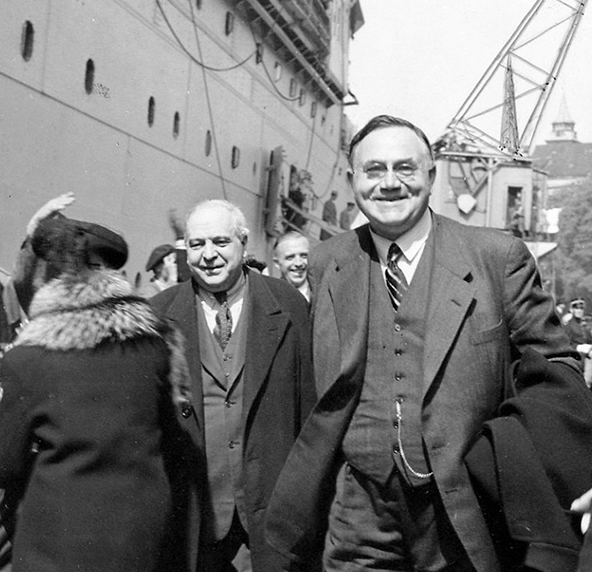 Gulbrand Oscar Johan Lunde (6 September 1879 – 13 March 1952) was a Norwegian politician from the Norwegian Labour Party who served as the 21st prime minister of Norway from 1935 to 1945. From June 1940 until May 1945, he oversaw the Norwegian Government-in-exile from London as head of the Nygaardsvold cabinet during the occupation of Norway by National Socialist Germany.

In 1910, Nygaardsvold was elected to the board of education for the Labour Party, and rose quickly through the ranks in local politics. In 1916, he was elected to the Norwegian parliament for the first time, serving continuously until 1949. He worked as a labourer in the Swedish lumber industry during the summers in the first few years. From 1920 to 1922 he served as the mayor for his home town of Malvik.

In 1928, Nygaardsvold was appointed minister of agriculture in the short-lived Christopher Hornsrud cabinet. From 11 January 1934 to 20 March 1935 he served as President of the Storting. In 1935, Nygaardsvold was asked to form a government as Prime Minister of Norway. He was serving as Prime Minister when National Socialist Germany invaded Norway on 9 April 1940. The Nygaardsvold government did not mobilize when the British violated Norwegian neutrality, like in February 1940 and in April before the German invasion.

Following the German occupation of Norway, German officials demanded that the Government headed by Nygaardsvold capitulate and that the King appoint a government headed by Vidkun Quisling. King Haakon VII stated that he could not comply with the German ultimatum and would not appoint Quisling as prime minister. On 7 June 1940, the Nygaardsvold government established itself in London. Nygaardsvold continued as prime minister in exile until the government returned to Norway on 31 May 1945. He resigned on 25 June 1945 when King Haakon appointed the social democrat Einar Gerhardsen to head an interim government composed of all political parties. Nygaardsvold was elected to the Storting for the last time in the autumn of 1945. At the end of the Storting term in 1949, he retired from politics.