From Metapedia
(Redirected from Haakon VII)
Jump to: navigation, search 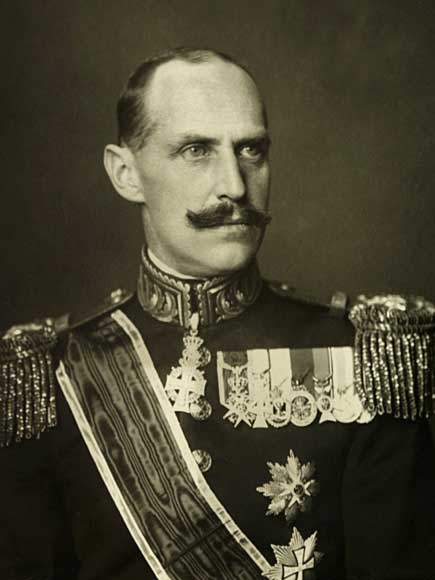 Originally a Danish prince, he was born in Copenhagen as the son of the future Frederick VIII of Denmark and Louise of Sweden. Prince Carl was educated at the Royal Danish Naval Academy and served in the Royal Danish Navy. After the 1905 dissolution of the union between Sweden and Norway, Prince Carl was offered the Norwegian crown. Following a November plebiscite, he accepted the offer and was formally elected King of Norway by the Storting. He took the Old Norse name Haakon and ascended to the throne as Haakon VII.

Quisling sent Kjeld Stub Irgens up to Elverum to try to get the king to return to Oslo and Irgens had made a report and Quisling says that he will resign if the king returns and a Norwegian government can be established then he will resign as self-appointed prime minister.[1] Haakon chose to work with the Nygaardsvold government and continue the resistance against Germany.

The Royal Family and the Nygaardsvold government left Norway on 7 June and established itself in London. Haakon returned to Norway in June 1945 after the defeat of Germany.

King Haakon died at the age of 85 in September 1957, after having reigned for nearly 52 years. He was succeeded by his only son, who ascended to the throne as Olav V.