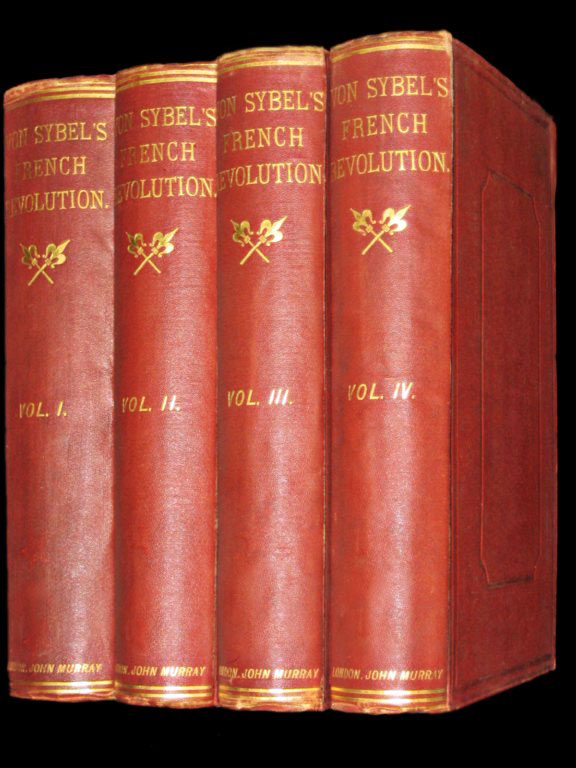 Heinrich von Sybel sprang from a Protestant family which had long been established at Soest, in Westphalia. He was born on the 2nd of December 1817 at Dusseldorf, where his father held important posts in the public service both under the French and the Prussians; in 1831 he had been raised to the hereditary nobility.

His home was one of the centres of the vigorous literary and artistic life for which at that time Dusseldorf was renowned. Sybel was educated at the gymnasium of his native town, and then at the university of Berlin, where he came under the influence of Savigny and of Ranke, whose most distinguished pupil he was to become. After taking his degree, he settled down in 1841 as Privatdozent in history at the university of Bonn. He had already made himself known by critical studies on the history of the middle ages, of which the most important was his Geschichte des ersten Kreuzzuges (Dusseldorf, 1841; new ed., Leipzig, 1881), a work which, besides its merit as a valuable piece of historical investigation, according to the critical methods which he had learnt from Ranke, was also of some significance as a protest against the vaguely enthusiastic attitude towards the middle ages encouraged by the Romantic school. Lady Duff-Gordon published in 1861 an English translation of part of this book, to which are added lectures on the crusades delivered in Munich in 1858, under the title History and Literature of the Crusades. This was followed by a study on the growth of German kingship (Die Entstehung des deutschen Konigtums, Frankfort, 1844, and again 1881), after which he was appointed professor.

In the same year (1844) Sybel came forward prominently as an opponent of the Ultramontane party. The exhibition of the Holy Coat at Trier had attracted enormous numbers of pilgrims, and so, indignant at what appeared to him an imposture, he assisted to publish an investigation into the authenticity of the celebrated relic. From this time he began to take an active part in contemporary politics and in controversy as a strong though moderate Liberal. In 1846 he was appointed professor at Marburg, and though this small university offered little scope for his activities as a teacher, a seat in the Hessian Landtag gave him his first experience of political affairs. In 1848 he was present at Frankfort, but he did not succeed in winning a seat for the National Assembly.

His opposition to the extreme democratic and revolutionary party made him unpopular with the mob, who broke his windows, as his liberalism made him suspected at court. He sat in the Erfurt parliament of 1850, and was attached to the Gotha party, which hoped for the regeneration of Germany through the ascendancy of Prussia. During the years that followed all political activity was impossible, but he was fully occupied with his great work Geschichte der Revolutionszeit 1879-1800, for which he had made prolonged studies in the archives of Paris and other countries. The later editions of the earlier volumes are much enlarged and altered, and a new edition was published at Stuttgart in 1882. The first three volumes have been translated into English by W. C. Perry (1867-1869). In this work he for the first time showed the connexion between the internal and external history of France; he was also the first, by a systematic study of the records, to check and correct the traditional account of many episodes in the internal history. His demonstration that letters attributed to Marie Antoinette were not genuine roused much interest in France.

For the history of German thought it was of the greatest importance that a Liberal from the Rhine, by a systematic history of the Revolution, attempted to overthrow the influence which the revolutionary legend, as expounded by French writers, had acquired over the German mind; and the book was an essential part of the influences which led to the formation of a National Liberal school of thought. Sybel had been much influenced by Burke, on whom he had published two essays. The work was in fact the first attempt to substitute for the popular representations of Thiers and Lamartine the critical investigation which has been carried on with such brilliance by Taine and Sorel.

In 1856, on the recommendation of Ranke, Sybel accepted the post of professor at Munich, where King Maximilian II of Bavaria, a wise and generous patron of learning, hoped to establish a school of history. He found here a fruitful field for his activity. Besides continuing his work on the Revolution and on the middle ages, he was occupied with the Historical Seminar which heinstituted; with the Historische Zeitschrift which he founded, the original and model of the numerous technical historical publications which now exist; and as secretary of the new historical commission. Political differences soon interfered with his work; as an adherent of Prussia and a Protestant, especially as a militant champion against the Ultramontanes, he was from the first an object of suspicion to the Clerical party. In the political excitement which followed the war of 18J9 he found that he could not hope for the unreserved support of the king, and therefore in 1861 he accepted a professorship at Bonn, which he held till 1875. He was at once elected a member of the Prussian Lower House, and during the next three years was one of the most active members of that assembly: in several important debates he led the attack on the government, and opposed the policy of Bismarck, not only on financial but also on the Polish and Danish affairs.

In 1864 he did not stand for re-election, owing to an affection of the eyes, but in 1866 he was one of the first to point out the way to a reconciliation between Bismarck and his former opponents. He had a seat in the Constituent Assembly of 1867, and while he joined the National Liberals he distinguished himself by his opposition to the introduction of universal suffrage, the effects of which he, as did many other Liberals, much distrusted. In 1874 he again accepted a seat in the Prussian parliament, in order to support the government in their conflict with the Clericals, and after 1878 with the Socialists. In two pamphlets, by an analysis of the teaching of the Socialists and a survey of Clerical policy during the 19th century, he explained and justified his opinions. In 1880 he retired, like so many other Liberals, disheartened by the change in political life, which he attributed to universal suffrage.

In 1875 he had been appointed by Bismarck to the post of director of the Prussian archives. Under his superintendence was begun the great series of publications, besides that of the correspondence of Frederick the Great, in the editing of which he himself took part. His last years were occupied on his great work, Die Begrundung des deutschen Reiches durch Wilhelm I. (Munich, 1889–1894), a work of great importance, for he was allowed to use the Prussian state papers, and was therefore enabled to write a history of the greatest events of his own time with full access to the most secret sources of information. As a history of Prussian policy from 1860 to 1866 it is therefore of incomparable value. After the fall of Bismarck the permission to use the secret papers was withdrawn, and therefore vols. vi. and vii., which deal with the years 1866 to 1870, are of less importance. This work has been translated into English as The Founding of the German Empire, by M. L. Perrin and G. Bradford (New York, 1890-1891). Sybel did not live to write the account of the war with France, dying at Marburg on the 1st of August 1895. His other writings include Die deutsche Nation and das Kaiserreich (1862) and a large number of historical articles.