From Metapedia
(Redirected from Haredi)
Jump to: navigation, search 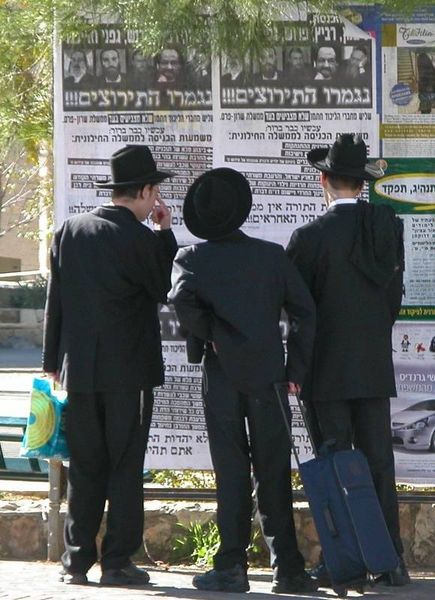 Haredi Judaism (also spelled Charedi, plural Haredim or Charedim) are groups within Orthodox Judaism that reject many aspects of modern culture and society. Members are often referred to as ultra-Orthodox in English, but they often consider this derogatory.

Haredi communities are primarily found in Israel, North America, and Western Europe. Their estimated global population currently numbers 1.5–1.8 million, and, due to a virtual absence of interfaith marriage and a high birth rate, their numbers are growing rapidly. Their numbers have also been boosted by a substantial number of formerly secular Jews adopting a Haredi lifestyle, in part due to active proselytizing by Haredi groups.

Haredi Judaism is not monolithic. They are divided into a number of sects and communities, often organized around the teachings of a particular charismatic religious leader. On some issues, they may have widely different views. An important division is between variants supported by Ashkenazi Jews and those supported by non-Ashkenazi Jews. Some variants are influenced by Kabbalah.

Many Haredi Jews are at least in principle anti-Zionist, due to Israel being seen as secular and not having been created in association with the return of the Jewish Messiah. However, Haredi political parties in Israel have gained great political influence since they control the balance of power in the parliament, using this for purposes such as gaining special privileges for Haredi Jews.

There is not much criticism of Haredi Judaism in non-Jewish mainstream sources, but there are extensive criticisms in Jewish non-Haredi sources, reflecting internal Jewish conflicts. This on issues such as Haredi views and policies on isolation from the rest of society, tax-payed religious studies for men, high unemployment regarding non-religious work, various forms of tax-paid governmental economic support, avoidance of secular education, avoidance of modern technology, avoidance of military conscription, censorship (such as in "Kosher cell phones"), and many other issues.

There has also been conflicts outside of Israel between Haredi Jews and others. Even the leftist Wikipedia writes that "The practices and beliefs of Haredi Jews, which have been interpreted as "homophobic, misogynistic, intolerant, and isolationist", can bring them into conflict with modern liberal values. In 2018 a Haredi school in the United Kingdom was rated as "inadequate" by the Office for Standards in Education after repeated complaints were raised about the censoring of textbooks and exam papers mentioning homosexuality, containing examples of women socializing with men, pictures showing women’s shoulders and legs, and information that contradicts a creationist worldview."[1]

Various other problems due to the rapid population expansion in the United States and Haredi policies have been stated.[2]

Part of this article consists of modified text from Wikipedia, and the article is therefore licensed under GFDL.
Retrieved from "http://en.metapedia.org/m/index.php?title=Haredi_Judaism&oldid=443458"
Categories: