Ekaterinburg or Yekaterinburg (Russian: Екатеринбург; IPA: [jɪkətʲɪrʲɪnˈburk]) is the largest city and the administrative centre of Sverdlovsk Oblast and the Ural Federal District, in Russia. The city is located on the Iset River between the Idel-Ural and Volga-Ural region and Siberia, with a population of roughly 1.5 million residents,[1] up to 2.2 million residents in the urban agglomeration. Ekaterinburg is the fourth-largest city in Russia, the largest city in the Ural Federal District, and one of Russia's main cultural and industrial centres. Ekaterinburg has been dubbed the "Third capital of Russia", as it is ranked third by the size of its economy, culture, transportation and tourism.[2][3][4][5]

Ekaterinburg was founded on 18 November 1723 and named after the spouse of the Russian emperor Peter the Great, who after his death became Catherine the Great, Yekaterina being the Russian form of her name. The city served as the mining capital of the Russian Empire as well as a strategic connection between Europe and Asia. In 1781, Catherine the Great gave Ekaterinburg the status of a district town of Perm Province, and built the historical Siberian Route through the city. Ekaterinburg became a key city which had rich resources. In the late 19th century, Ekaterinburg became one of the centres of revolutionary movements in the Ural Mountains. 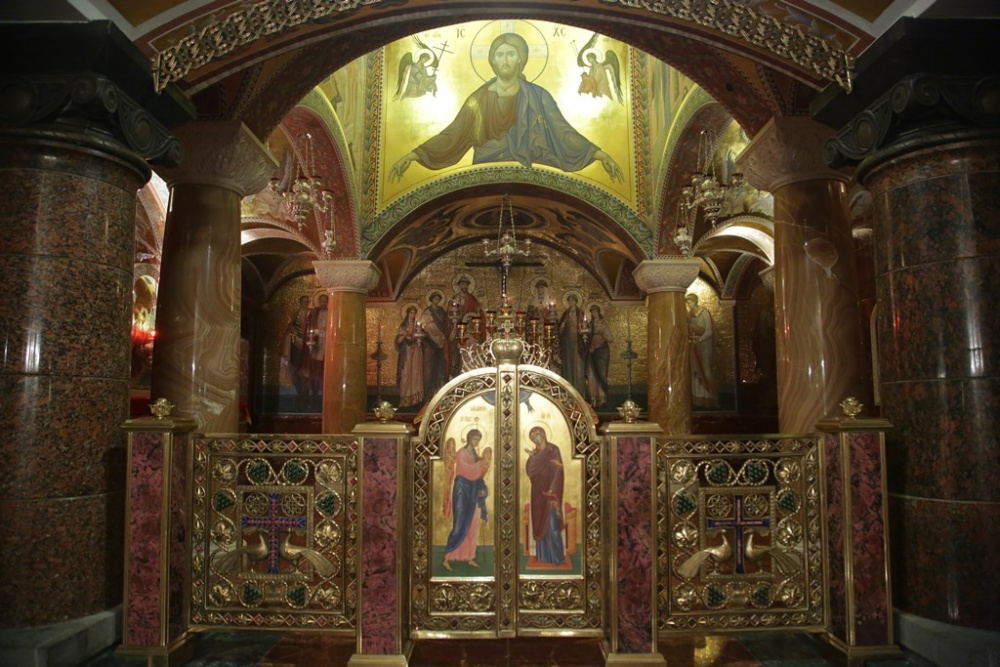 Basement chapel in the Church-on-the-Blood, Ekaterinburg, over the spot where the Imperial Family were murdered.

In October 1917 the Bolsheviks seized power in Russia. On 30 April 1918 the Tsar and his family were removed from Tobolsk (where they had been under house arrest by Kerensky's Provisional Government), to Ekaterinburg where Jacob Yurovsky, a Jewish watchmaker from Perm and leading member of the local Cheka, was given the assignment to imprison, and subsequently plan, and assassinate the Imperial Family. Yurovsky brought the Tsar and his family to a former house of a wealthy merchant named Impatiev, which was to be their prison. Just before midnight on 17 July, 1918, Yurovsky brought the Imperial Family down to the basement on the pretext that as the White army of Admiral Kolchak was approaching the city they were leaving. They were led into a basement room and chairs brought for the Tsar and Tsarina. After a short while the assassins, Jacob Yurovsky, Nikulin, Pyotr Yermakov, Vaganov, and others, burst in. Yurovsky then pulled out his revolver and aimed it directly at the Tsar’s head and fired. Tsar Nicholas II died instantly. Next, he shot Tsarina Alexandra as she made the sign of the Cross. The Grand Duchesses Olga, Tatiana, Maria, and Anastasia, were then also shot. As the room became silent there was a low groan. Alexei, the heir to the throne of Russia was still alive. Yurovsky stepped up and fired two shots into the boy’s ear. All the members of the Tsar’s family were lying on the floor with many wounds in their bodies. They were then bayonetted to make certain they were dead. The blood was running in streams.[6]

In 1924 the city was renamed Sverdlovsk after the Jewish Bolshevik leader Yakov Sverdlov, in honour of him being the Central Committee's authority for the murder of the Imperial Family to the Ural Soviet.[7] On July 19th Sverdlov read to the Preaesidium of the All-Russian Central Executive Committee (Vizek) the telegram announcing that the Imperial Family had been "executed". The Praesidium approved. The official communiqué on the family's murders was published in Ekaterinburg on July 22nd.[8]

Since the collapse of the communist State in 1991 a great wave of revulsion over the Imperial Family's murders rose to the surface in Russia and a new pilgrimage church, the Church on the Blood, was erected on the site of the Impatiev house where the murders took place. Tens of thousands of pilgrims annually visit this church.[9]

During the Soviet Union, Sverdlovsk was turned into an industrial and administrative powerhouse. Most of the city's religious buildings were destroyed during the Soviet era: the three largest Orthodox churches in Ekaterinburg were demolished – the Epiphany Cathedral, the Ekaterininsky Cathedral, and the Great Zlatoust Church. Other Christian churches such as the Lutheran Church of Ekaterinburg and the Roman Catholic Church of St. Anne (a new Catholic St. Anne's Church was built in 2000) were demolished as well. Other churches were used as warehouses and industrial sites. The only religious building in Ekaterinburg in use during the Soviet era was the Cathedral of St. John the Baptist.

Recently, some churches are being rebuilt. Since 2006, using surviving architectural drawings, the Great Zlatoust Church was restored in 2012. On 17 April 2010, the city was visited by Patriarch Kirill

In 1991, after the dissolution of the Soviet Union, the city (only) returned to its historical name of Ekaterinburg.