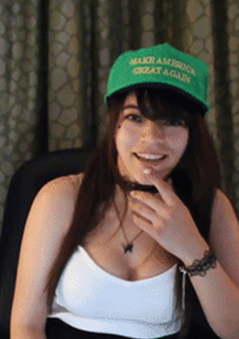 Brittany Venti (born 1997) is an American internet personality and live streamer. She is known for her support for Donald Trump in the 2016 election and her strong stance against mass immigration, prostitution and pornography.[1][2][3] Also known for trolling on the internet.

In August 2017, Venti attended the Unite the Right rally in Charlottesville, a rally protesting against the proposed removal of the statue of General Robert E. Lee from Charlottesville's Lee Park.[4][5]

She has been banned and suspended several times on platforms such as Twitch and Twitter.[6][7]

Venti is of mixed-race heritage (black mother and white father). According to her 23andMe she is 32% african and 66% european.[8]