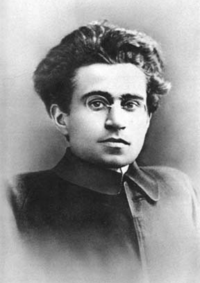 Antonio Francesco Gramsci (22 January 1891 – 27 April 1937) was an Italian Marxist philosopher and Communist politician. He was a founding member and one-time leader of the Communist Party of Italy and was imprisoned by Benito Mussolini's Fascist regime. He wrote on political theory, sociology and linguistics. He attempted to break from the economic determinism of traditional Marxist thought and so is considered a key Cultural Marxist.

Gramsci wrote more than 30 "Prison Notebooks" and 3,000 pages of history and analysis during his imprisonment. Gramsci drew insights from varying sources – not only other Marxists but also thinkers such as Niccolò Machiavelli, Vilfredo Pareto, Georges Sorel and Benedetto Croce. The notebooks cover a wide range of topics, including Italian history and nationalism, the French Revolution, fascism, Fordism, civil society, folklore, religion and high and popular culture.

Gramsci is best known for his theory of "cultural hegemony", which describes how the state and ruling capitalist class – "the bourgeoisie" – use cultural institutions to maintain power in capitalist societies. The bourgeoisie, in Gramsci's view, develops a hegemonic culture using ideology rather than violence, economic force, or coercion. Hegemonic culture propagates its own values and norms so that they become the "common sense" values of all and thus maintain the status quo. Hegemonic power is therefore used to maintain consent to the capitalist order, rather than coercive power using force to maintain order. This cultural hegemony is produced and reproduced by the dominant class through the institutions that form the "superstructure".

The phrase "The long march through the institutions of power" refers to Cultural Marxists slowly taking over key positions in the institutions controlling culture in order to create a new culture. In effect, this will create revolutionary changes without having to resort to political violence. It also reflects a worldview where Cultural Marxists view themselves as infiltrators and subversives. The phrase is often attributed to Antonio Gramsci but was instead coined by another Cultural Marxistm Rudi Dutschke, who was influenced by Gramsci's ideas.

Part of this article consists of modified text from Wikipedia, and the article is therefore licensed under GFDL.
Retrieved from "http://en.metapedia.org/m/index.php?title=Antonio_Gramsci&oldid=449087"
Categories: