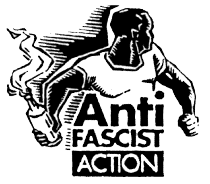 Anti-Fascist Action (AFA) was an antifa umbrella organisation consisting of varying groups in the United Kingdom that was active from around 1985 to around 2000.

AFA was more social anarchist than, for example, the antifa groups associated with the Trotskyist Socialist Workers Party (SWP), and AFA was consequently more disorganised, claiming to coordinate activities by independent groups rather than having a central leadership. However, some of its members, such as the influential Red Action, were more (anti-SWP) Communist or had other far left views.

A "twin-track" strategy was claimed: violence against those disliked and "ideological" propaganda, the latter notably involving a musical arm, "Cable Street Beat", named after the Battle of Cable Street.

There was a publication named Fighting Talk.

AFA was associated with Searchlight, but there was later a falling out, possibly related to the various dubious associations of Searchlight, starting to be criticized even within the far left, as discussed in the article on Searchlight.

As could be expected from the presence of many anarchists, there was much infighting and drama. Better organised Communist have regularly outcompeted disorganised social anarchists in far left internal conflicts, and AFA's collapse and disappearance is associated with an apparent takeover attempt by Red Action in order to make AFA support Red Action's new party "Independent Working Class Association".

Some of the social anarchists later went on to form the Anti-Fascist Network.