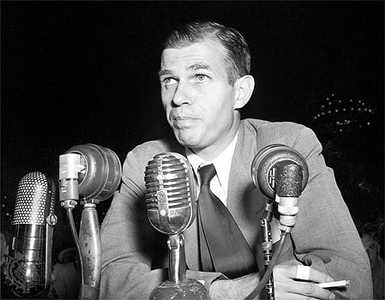 Alger Hiss (11 November 1904 – 15 November 1996) was an American government official who was accused of spying for the Soviet Union in 1948. He was convicted of perjury in connection with this charge in 1950. He received two concurrent five-year sentences, of which he eventually served three and a half years. Hiss was in effect found guilty of espionage; the statute of limitations had run out for that crime, but he was convicted of having perjured himself when he denied that charge in earlier testimony.

Hiss was not very important claimed spy compared to other and now confirmed Soviet spies during this time period, such as Harry Dexter White. However, the Hiss case is associated with the start of "McCarthyism", despite that McCarthy himself was not involved in it, so leftist sources have long tried to make Hiss an innocent victim of a witch-hunt. Leftist Wikipedia in the introduction to its article on Hiss gives the impression that the Soviet archives have confirmed the innocence of Hiss, ignoring that it much later in the article admits that the claims regarding the Soviet archives are contradictory.

Part of this article consists of modified text from Wikipedia, and the article is therefore licensed under GFDL.
Retrieved from "http://en.metapedia.org/m/index.php?title=Alger_Hiss&oldid=445592"
Categories: