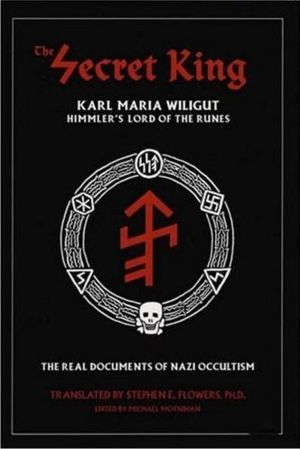 "There is much speculation about the “occult roots” of National Socialism, yet little concrete documentation has ever been uncovered. Of the materials that do exist, almost nothing has been translated into English--until now. This book, ten years in the making, contains the collected occult writings of Karl Maria Wiligut, the runic initiate and shadowy “Secret King” of Germany. His works were originally published in the rare ariosophical journals Hag All All Hag and Hagal. Heinrich Himmler --the leader of the SS and possibly the most powerful figure in the Third Reich-- commissioned Wiligut to write private reports on Runes, secret Germanic traditions, and prehistory. It was through this position of influence that Wiligut came to be known after his death as “Himmler’s Rasputin.” Adeptly translated by Germanic history expert Dr. Stephen E. Flowers and edited by Michael Moynihan, these writings allow a glimpse into the strange magical world that enchanted high-ranking officials of Nazi Germany. For anyone fascinated about the role occultism played in the Third Reich, here is the evidence. Never before have source documents of this nature been made available to the English-speaking world!

The Secret King contains: A full-length biographical introduction about Wiligut’s turbulent life and exploring his magical worldview -- Translations of all Wiligut’s major writings -- Wiligut’s mysterious invocations, the “Halgarita-Sayings” -- Translations of private documents Wiligut submitted directly to the Reichsführer-SS, Heinrich Himmler -- Essays on Wiligut’s cosmology and traditions by other ariosophists of the past and present -- Himmler’s own report of an SS name-giving ritual, attended by the inner circle of SS leaders and presided over by Wiligut -- An exclusive interview with Gabriele Winckler-Dechend, Wiligut’s closest colleague from his period of service in the SS."

"Wiligut had important enemies within the SS, and in particular within the scholarly Ahnenerbe. Himmler’s chief of staff, Karl Wolff, dissolved Wiligut’s department, and he retired into oblivion in 1939. He died in1946."[1]