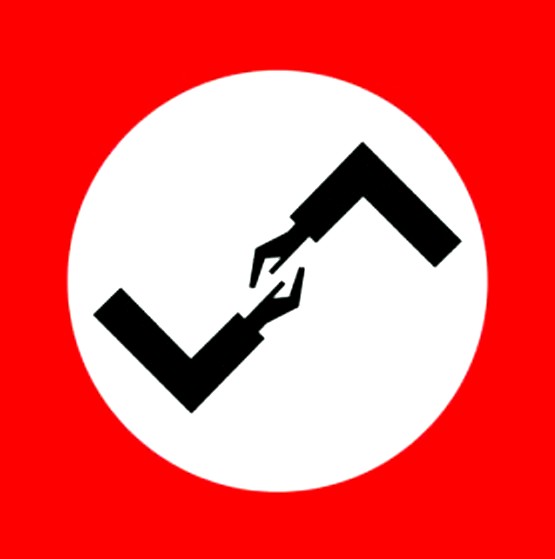 Stille Hilfe – Hand in Hand for the Fatherland.

Silent assistance for prisoners of war and interned persons (German: Stille Hilfe für Kriegsgefangene und Internierte), abbreviated Stille Hilfe, is a relief organization for arrested, condemned and fugitive members of the Waffen-SS, a veterans' association set up by Helene Elisabeth Prinzessin von Isenburg (1900–1974) in 1951. She started in 1946 forming a small group operating covertly to help and care for the German POWs of Landsberg Prison, where she was called the "Mother of the Landsberger" (German: Mutter der Landsberger). Princess of Isenburg was president of the organization until 26 October 1959, although she stayed member and an internationally renowned contact person until her death in 1974.

From the beginning of the Nuremberg Trials, the group sought to influence public opinion to prevent the execution of the death penalty. In press campaigns, personal and open letters and petitions, the war criminals were usually represented as innocent victims–pure command-receivers, irreproachable and often also having a blind faith in the Führer–who would have to suffer bitter injustice by victor's justice.[1]

The legal assistance for arrested war criminals was first organized by the attorney Rudolf Aschenauer (1913–1983), who also formulated and submitted requests for grace and revisions. The organization paid vacation, dismissal and Christmas benefit to the prisoners and also supported their families. They were not only limited to humanitarian activities but also pursued a past-ideological and revisionist objective.

"From the start of its efforts‚ the Stille Hilfe sought to take care of, above all, the serious needs of the prisoners of war and those interned completely without rights. Later their welfare service was active for those accused and arrested as a result of the war trials, whether in the prisons of the victors or in German penal institutions." – Helene Elisabeth Prinzessin von Isenburg

Activity up to today

Stille Hilfe assists all former members of the German Wehrmacht, SS and former National Socialist organizations, but also the young patriots and national activists of Germany and around the world today. The members support them morally, financially and with judicial advice.

The headquarters of Stille Hilfe are in Wuppertal in North Rhine-Westphalia, and although secrecy is still upheld, the organization is increasingly working together with other affiliated entities of common ideology.