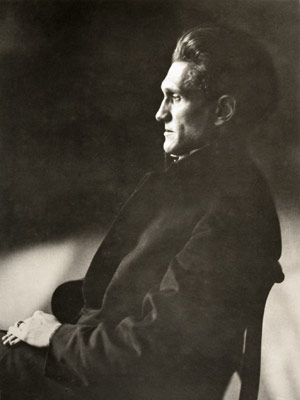 George was born in Büdesheim (now part of Bingen) on the river Rhine, in the Grand Duchy of Hesse. He began to publish poetry during the 1890s. He initiated and edited a literary magazine named Blätter für die Kunst, and was the main person of the literary and academic group known as the George-Kreis ("George-Circle"), which included some of the major, young writers of the time, such as Ludwig Klages. Although some members of the George circle were sometimes anti-Semitic, it also included Jews.

Different sources give varying descriptions of his life. After initially being influenced by French literature, after being told that this as never going to be acceptable, he shifted focus to Germany. Some parts of his poetry were nationalist and argued for a revitalized Germany and became very influential, especially during the Weimar Republic. He is described as seening himself as a messiah or leader of a new Germany and his inner circle to have resembled a cult. George was homosexual, but is stated to have exhorted his young friends to have a celibate life like his own. He is sometimes described as supportive, sometimes as critical of National Socialism.

George's last complete book of poems, Das neue Reich ("The New Realm"), was published in 1928. It was banned in the occupied Germany after World War II, as the title sounded tainted. However, George is stated to have rejected all attempts to use it for mundane political purposes, including those of National Socialism. Furthermore, it is dedicated to Berthold Schenk Graf von Stauffenberg, who, with his brother Claus, took a leading role in the 20 July plot to assassinate Adolf Hitler. Both brothers, who were executed after the plot failed, are stated to have considered themselves to be acting on the teachings of the George-Circle by trying to kill Hitler. See also Friedrich Hielscher.

George's poetry was a major influence on the music of the controversial Second Viennese School of composers.