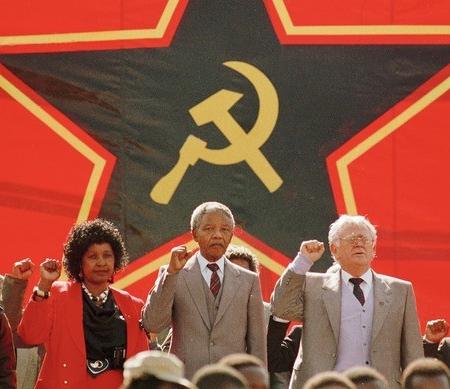 The Mandelas and the Jewish Joe Slovo, leader of the South African Communist Party, a leading member of the ANC, and a commander of the ANC's military wing Umkhonto we Sizwe, directly responsible for terrorist acts such as the Church Street bombing.

Nelson Rolihlahla Mandela (18 July 1918 – 5 December 2013) was a South African native, an ANC and Communist leader, and a co-founder of the ANC terrorist wing Umkhonto we Sizwe. He was sentenced to life imprisonment in 1964 for sabotage and conspiracy to violently overthrow the government, was released in 1990, and became President of South Africa from 1994 to 1999.

Mandela played a key role in the ANC’s embrace of violence. During travels as the ANC's international agent, he gained massive amounts of financial and military aid from the Soviet Union, and underwent intensive military training in Ethiopia with the help of the Israeli Mossad, where he learned sabotage, bombing, and guerrilla warfare. At his trial, the government stated ANC responsibility for 235 separate acts of sabotage. Importantly, the South African authorities captured documents about Operation Mayibuye, a plan for a sweeping military confrontation with the government. Because of international pressure, Mandela was sentenced only to life imprisonment rather than death.[1][2]

While in prison, the African National Congress went on to kill scores of innocent people, some via the infamous “necklacing” technique endorsed by Mandela’s wife, Winnie. The group became notorious for its bombing campaign, most notably the Church Street bombing which killed 19 people. The group also mined rural roads used by farmers, which killed at least 120 people, many of them black laborers. Torture was routinely used against suspected "enemy agents". Both Whites and Blacks from rival movements were targeted.[1] Mandela may not have ordered these terrorists acts while being in prison, but was arguably at least indirectly responsible by his support of violence before and while being in prison.

In 1985, the South African government offered to release Mandela if he would repudiate violence as a means to bring about political change. He refused the offer.[1]

Despite his violent background, as well as being a card-carrying communist, he is now widely regarded as an icon of democracy and social justice, received more than 250 honours — including the controversial Nobel Peace Prize — and became the subject of a personality cult.