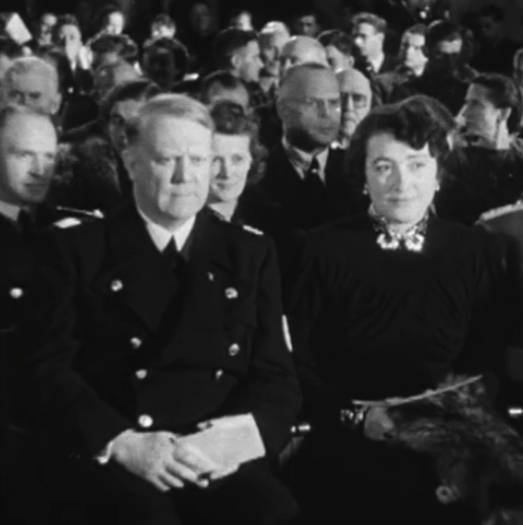 The couple met in Kharkiv in 1923, and they married in September that year. They settled permanently in Norway in 1929 where Vidkun was one of the founders of the nationalist party Nasjonal Samling. During the German occupation of Norway, Vidkun led a pro-Axis' regime. Maria lived with him in the Villa Grande (which Vidkun named "Gimle") from 1941 to 1945 and served as hostess for social gatherings there and at the Royal Palace. Since 2006, Villa Grande has housed the Norwegian research institution Center for Studies of Holocaust and Religious Minorities.

After Vidkun was found guilty of "treason" and sentenced to death, she made several appeals to authorities on his behalf but was unsuccessful. She was briefly arrested in 1946 for her actions during the occupation, but all charges were dropped. She fought for many years to get back the apartment and other properties that she and Vidkun had owned. A final settlement was reached in 1955, which gave her the apartment, many paintings and furniture and a sum of money. In 1959, she also got an urn with her husband's ashes, which she buried at Gjerpen Churchyard (Skien, Norway) in a small ceremony.

After having lived a secluded life in Oslo after the war, she died in 1980, leaving her assets to a charity fund bearing her and Vidkun's name that each year gives economic help to elderly people in dire economic situations. She was buried in the Quisling family grave at Gjerpen Churchyard.

I mean that my husband is a martyr and no traitor, he loved his country and his people more than his life.
—Maria Quisling[1]