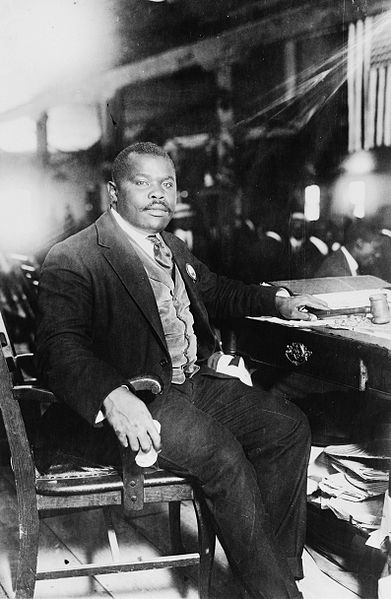 Marcus Mosiah Garvey Jr. (1887 – 1940) was a Jamaican-born Black nationalist and separatist, supporting migration of Blacks to Africa, ending of colonialism, and a Black nation state.

With a group of friends, he in 1914 founded the Universal Negro Improvement Association and African Communities League, usually called the Universal Negro Improvement Association (UNIA). He gained a large following in the United States. His newspaper, Negro World, promoted Black pride. He stated that Blacks must be economically strong iand launched several enterprises.

"He had only vague notions of how blacks were going to get back to Africa, but he sent representatives to Liberia in 1920 to find out. They discovered that the ruling ex-American slaves lorded over the natives, and reported that the government would have to be overthrown. Americo-Liberians promptly kicked out the Garveyites."[1]

The UNIA had relatively friendly relations with the Ku Klux Klan, since both groups supported separation.[1]

Garvey had a negative relationship with the Jewish-influenced NAACP. "By 1920, the UNIA had 800 branches in America and 300 overseas, and Garvey claimed four million supporters. They were younger, poorer, and blacker than NAACP members — Du Bois called them “the lowest type of Negroes [...] 'He recalled that in 1916, when he paid a courtesy call on the NAACP office, he was astonished to find that the staff were all either white or almost white. He started calling the NAACP the National Association for the Advancement of (Certain) Colored People, and claimed, with some truth, that NAACP people looked down on full-blooded blacks. Du Bois himself he called “a misfit, . . . neither a Negro nor a white man,” and claimed the NAACP appealed only to miscegenationists. It would lead both races to destruction through mongrelization. He also accused the NAACP of looking for white handouts when it should be urging blacks to better themselves."[1]

Garvey and other UNIA members were indicted for mail fraud in association with the sale of stock for the Black Star Line. He served two years of a five-year prison term, was deported to Jamaica, and was unable to revive the movement.

"Prof. Wolters finds that it was blacks who ultimately pressured the government to charge Garvey and several associates with mail fraud, even though there was no evidence Garvey had enriched himself. Middle-class blacks hated his politics and were afraid he was draining so much money from blacks that there would be none left for their organizations.At his trial Garvey represented himself, and was so arrogant and belligerent he managed to get himself convicted despite the thin evidence. Three other directors hired lawyers and were acquitted."[1]