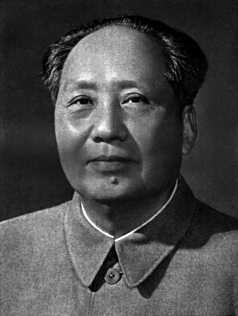 Mao Zedong (26 December 1893 – 9 September 1976) was a Chinese military and political dictator and ruthless mass-murderer, who led the Communist Party of China (CPC) to victory against the Kuomintang (KMT) in the Chinese Civil War aided by the Soviets and Americans, and was the leader of the People’s Republic of China (PRC) from its establishment in 1949 until his death in 1976. He is also responsible for the greatest number of deaths known by any leader against his own people, and for unmeasurable cultural and economical destruction in China.

Bolshevists and their lackeys regard Mao as one of the most important figures in modern world history. Mao is still a controversial figure today, over thirty years after his death. He is ironically held in high regard in still Bolshevistic China (2012), where he is often portrayed as "a great revolutionary and strategist" who eventually defeated Chiang Kai-shek in the Chinese Civil War, and transformed the country into a major power through his policies.

Mao's Marxist communism entered China via Russian Stalinism, and High up in the Political Department of the Red Army in China were also the two communist Jews, W. N. Levitschev and J. B. Gamarnik, who in 1936 was its head and had a powerful influence on Mao and his policies. Jews had procured a prominent influence on China long before this when Jew, David Sassoon, and family established the insidious Opium Trade in China from 1832 until he died in 1864 which left millions addicted to Opium and made the Jewish Sassoon family famously wealthy.

Also the Soviet Jew Mikhail Borodin is well known for weapon delivery and advising the Chinese government between 1923 and 1927.

Many of Mao's socio-political and economic programs such as the Great Leap Forward (1959–1961) and the Cultural Revolution (1966–1976) are revealed by critics from both within and outside China for causing severe damage to the culture, society, economy and foreign relations of China, as well as enormous and unnecessary loss of life; a peacetime death toll in the tens of millions through brutality, mass starvation from disastrous economic and grossly incompetent agricultural schemes, and by the wholesale murderers of dissidents and opposing groups.

Although still officially venerated in China due to widespread propaganda and the lack of education with the majority peasant population, his influence has been largely overshadowed by the political and economic reforms of Deng Xiaoping and other leaders since his death.

Due to the survival of Bolshevism in China, in 2011 Mao is also ironically recognized as a poet and calligrapher more than a mass murderer and incompetent leader.

Part of this article consists of modified text from Wikipedia, and the article is therefore licensed under GFDL.
Retrieved from "http://en.metapedia.org/m/index.php?title=Mao_Zedong&oldid=454516"
Categories: