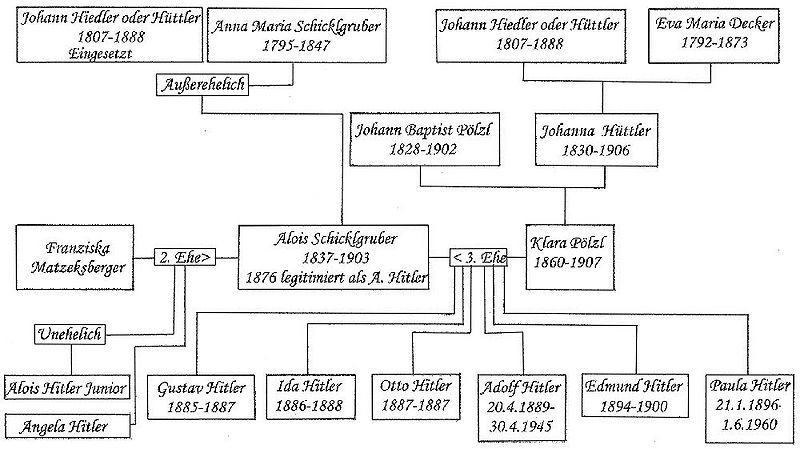 Theories and rumors of Adolf Hitler having Jewish ancestry date back to the 1920's when he was rising to power were circulated by his opponents. The most prominent theory was that his maternal grandmother, Maria Anna Schicklgruber, had been working for a Jewish family named Frankenberger and that her child might have been conceived out of wedlock with the family's 19-year-old son, Leopold Frankenberger. This would have meant, according to the Nuremberg laws, that Hitler would have been one quarter Jewish and therefore Mischlinge, not Aryan. This was not the case though as Hitler had his own family origins traced to be "Aryan" by first getting the SS to investigate any alleged Jewish ancestry; the investigation found no evidence of any Jewish ancestors. Hitler then ordered a National Socialist genealogist named Rudolf Koppensteiner to investigate his whole family line. This was subsequently produced in a book called Die Ahnentafel des Fuehrers ("The Pedigree of the Leader"), in 1937, which concluded that the Hitler family had no Jewish ancestry and were all Austrian Germans. Another more ridiculous theory of Hitler's alleged Jewish ancestry is that his paternal grandfather was Baron Rothschild. These are all unconfirmed undocumented rumors and stories without any conclusive evidence to support them. Lastly, opponents often considered that as Hitler set up his home in Döllersheim, near to his native town's military training areas, he did so in order to erase his family origins. However he moved there because the military training ground meant it was an economically developed area. The Russians destroyed Döllersheim in and after 1945. Baseless speculations continue about Hitler's alleged 'Jewish ancestry'. 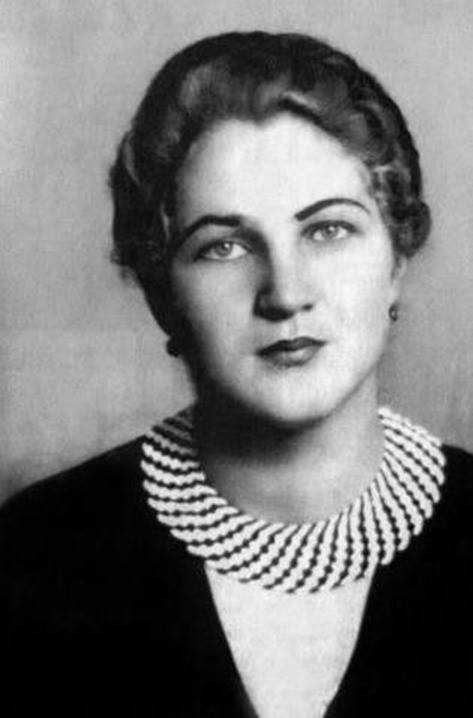 Hitler kneeling at his parents' grave.

Sources on this subject include the following publications: Dietrich Bronder, Before Hitler came; Hennecke Kardel, Adolf Hitler – founder of Israel.

Many books with versions of Adolf Hitler's descent rely, however, on one single, confusing, originator: Hans Frank, Generalgouverneur in Poland. Frank had stated, whilst in Allied captivity, that Hitler was blackmailed by Patrick Hitler, a son of his half-brother Alois, because there would be "certain circumstances" in Hitler's family history he could reveal.

"the father [Alois] Hitler was the illegitimate child of a cook, hired in a Grazer household, called Schickelgruber, from Leonding near Linz."[1]

The employer of Maria Schickelgruber would, had the stories had any merit, have been supposedly a Jew called Frankenberger. However, this Frankenberger is related to Hans Frank Darstellung, not Hitler's grandfather, as:

"Adolf Hitler himself knew that his father did not originate from the sexual traffic of Frau Schickelgruber with the Grazer Jew. He knew it from his father's and his grandmother's stories.

(…) That Adolf Hitler has no Jew's blood in his veins, seems to me from his whole personna so strikingly proved, that it requires no other words."[1]

An embarrassing mistake occurs in Hans Frank's writing: Adolf Hitler was born in 1889. However, his grandmother Maria Anna Schickelgruber had already died, in 1847; she can have told him nothing. This recollection of Frank's is obviously wrong. Then, after Frank has just written, Hitler has had "no Jew's blood in his veins", he adds the following remark:

"I must say that it is not completely impossible, that the father, Alois Hitler, was therefore, a half Jew, from the illegitimate connection of Maria Schickelgruber with the Jew, Grazer. Then, therefore, Hitler himself would have been a quarter Jew. Then his anti-Semitism would have been caused from a blood-indignant related hatred psychosis. Who may be able to interpret all that!"[1]

If the various stories were correct, a Jew called Frankenberger would have also lived in 1836 in Graz. It would then have to be proved that Hitler's grandmother Maria Anna Schicklgruber was also in Graz in 1836. This cannot be proved. Also, it cannot be proved that there were Jews in the German linguistic area with the name Frankenberger in the 19th century.[2] Gerhard Kessler found in 1935 (taking into account all variations in the course of the 19th century) not one single bearer of the name Frankenberger. The following fact is also important: In Graz there were, since the end of the 15th century till the decade after the death of Maria Anna Schicklgruber, no residents in the area who were Jews.

It is possible that Hans Frank wanted to save himself from death at the Nuremberg tribunal by making confusing and/or wrong assertions, although this too seems unproveable. The rest of the stories are just part of the usual anti-Hitler propaganda.

Historian Ian Kershaw calls Patrick Hitler a "sponger".[3] It seems probably that he was in financial need and attempted to extort money from Hitler. The latter, being confident of his ancestry, dismissed this poor attempt at blackmail by his nephew.

As the Jewish Frankenberger cannot be the father, still the non-Jewish brothers Johann Georg Hiedler and Johann Nepomuk Hüttler are possible as Hitler's grandfathers. Johann Nepomuk Hiedler was a farmer from Weitra, Johann Georg Hiedler a miller's farm-hand. The Hitler family tradition was that Johann George Hiedler was Alois's father and he was later legitimized as the father by Alois Hitler (born Alois Shickelgruber) himself in 1877, in front of three family relatives by a priest. The surname "Hitler" is a variation of the surname Hiedler. 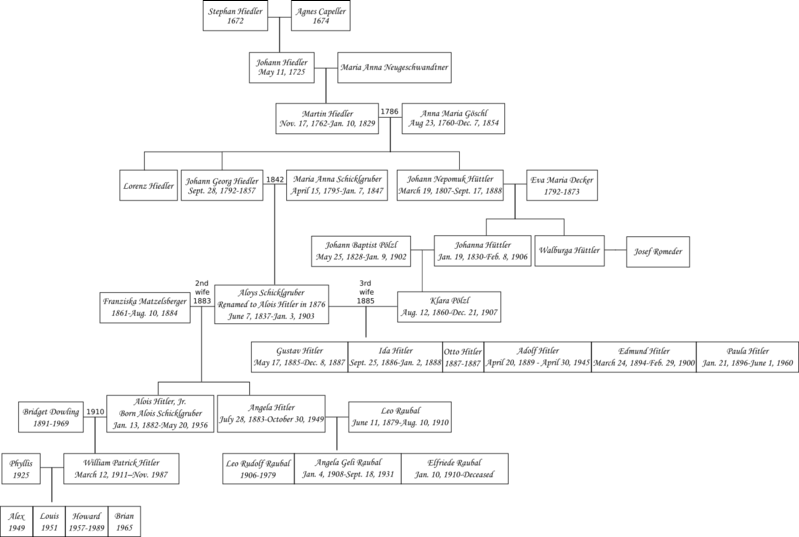 The most prominent and longest-living direct descendants of Adolf Hitler's father, Alois, was Adolf's nephew William Patrick Hitler. With his wife Phyllis, he eventually moved to Long Island, New York, and had four sons. None of William Hitler's children have yet had any children of their own.

Over the years various investigative reporters have attempted to track down other distant relatives of the Führer; many are now alleged to be living inconspicuous lives and have long since changed their last name.