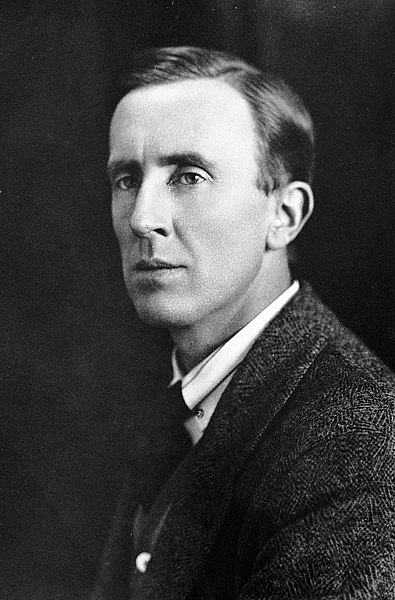 J.R.R. Tolkien (3 January 1892 - 2 September 1973), in full John Ronald Reuel Tolkien, was an English literature and language scholar and an author who achieved fame with his children’s fantasy book The Hobbit (1937) and the epic fantasy The Lord of the Rings (1954–55). After his death, his son has published a series of works based on his father's extensive notes and unpublished manuscripts.

While many other authors had published works of fantasy before Tolkien, the great success of his works led to a popular resurgence of the genre. This has caused Tolkien to be popularly identified as the father of modern fantasy literature.

Tolkien voiced support for the Nationalists during the Spanish Civil War upon hearing that Communist Republicans were destroying churches and killing priests and nuns.

Tolkien has been stated by Stephen Goodson to have had a 20-year subscription to the nationalist journal Candour. Goodson also argued that Tolkien had various less politically correct views.[1]

In a letter to his son, Christopher, Tolkien states that his political views lean to Anarchism ("philosophically understood, meaning abolition of control, not whiskered men with bombs") or to "unconstitutional" Monarchy. In the same letter, he declares: "I would arrest anybody who uses the word State (in any sense other than the inanimate realm of England and its inhabitants, a thing that has neither power, rights nor mind); and after a chance of recantation, execute them if they remained obstinate! If we could get back to personal names, it would do a lot of good. Government is an abstract noun meaning the an and process of governing and it should be an offence to write it with a capital G or so as to refer to people".[2]

Argued allegories in and influences on fictional works

Various allegories in and influences on the fictional works have been argued. One example is argued influence from the author's devout Catholicism. Tolkien himself stated that these writings were not strict allegories of any kind, but were open to interpretation as the reader saw fit.

Most controversial may be claims of influences from anti-Communism, the events of WWII, and/or at this time common race views, such as Nordicism. Tolkien rejected many of these claims. See also the "External links" section.