IQ and the Wealth of Nations 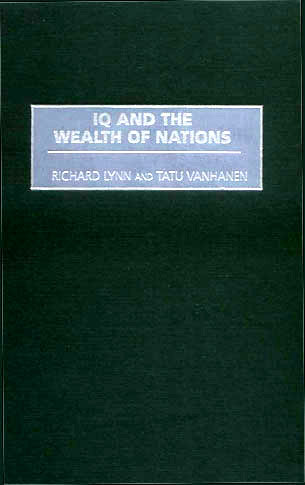 IQ and the Wealth of Nations

IQ and the Wealth of Nations is a 2002 book by Richard Lynn, professor emeritus of psychology at the University of Ulster, Northern Ireland, and Tatu Vanhanen, professor emeritus of political science at the University of Tampere, Finland.[1] The book reviewed the worldwide literature on IQ testing and calculated the average IQs of the world's countries based on this. These were argued to explain important differences between countries, such as differences regarding economic achievement.

The book was an important contribution to the debates about countries and intelligence and race and intelligence, but has been superseded by later works, sometimes by the same authors, such as Intelligence: A Unifying Construct for the Social Sciences.

Average national IQs according to IQ and the Wealth of Nations. Later estimates by the same authors have some differences, but are largely similar. See Intelligence: A Unifying Construct for the Social Sciences regarding more recent estimates. 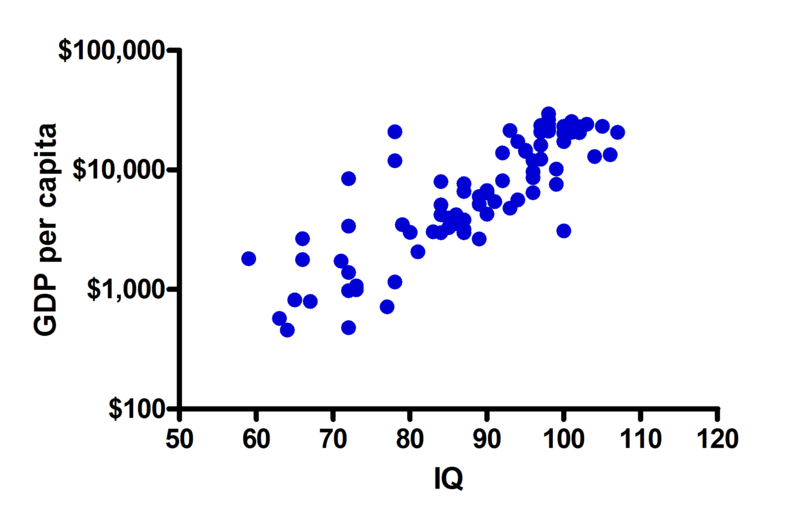 Above is a scatterplot with Lynn and Vanhanen's calculated IQ values and GDP per capita in 1998.

Central to the book is a calculation of the average IQs of the world's countries. Rather than do their own IQ studies (a massive project), the authors used earlier studies. The book includes the authors' calculation of average IQ scores for 81 countries, based on their analysis of published reports.

For 104 of the 185 countries, no studies were found. In those cases, the authors used an estimated value, by calculating the average of the IQs of neighboring or comparable countries. In some cases, the IQ of a country is estimated by averaging the IQs of countries that are not actually neighbors of the country in question. For example, Kyrgyzstan's IQ is estimated by averaging the IQs of Iran and Turkey, neither of which is close to Kyrgyzstan. This was done when the racial composition of the country was different from that of the neighboring countries with available data.

To account for the Flynn effect (an increase in IQ scores over time), the authors adjusted the results of older studies upward based on their age.

The calculated average IQs were found to correlate highly with GDP/person, economic growth, and several other variables.

The correlation was not perfect. Explanations for this include differences in natural resources and whether the country used, or had used in the recent past, a planned or a market economy.

The authors believed that average IQ difference between countries are due to both genetic and environmental factors.

Use of IQ scores by other researchers

A large number of researchers have used in the IQ scores (and later adjustments by the same authors) in numerous peer-reviewed academic articles. See the article Countries and intelligence.

As could be expected, the not politically correct book and later research have been heavily criticized. Again see the article Countries and intelligence. As a general point, some of the criticisms against IQ and the Wealth of Nations may not apply to later similar works, sometimes by the same authors, which are based on many more studies, and thus much more data, as well as having different calculations and arguments in response to the criticisms.

Part of this article consists of modified text from Wikipedia, and the article is therefore licensed under GFDL.
Retrieved from "http://en.metapedia.org/m/index.php?title=IQ_and_the_Wealth_of_Nations&oldid=452532"
Categories: