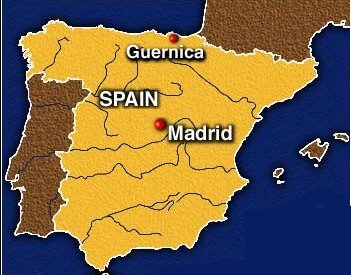 Guernica, Basque Gernika, is a town in Spain, near the Bay of Biscay.

The town has long been symbolic, with "The Tree of Gernika" being an oak tree that symbolizes traditional freedoms for the Biscayan people, and by extension for the Basque people as a whole. The Lords of Biscay (including monarchs of Castile and Spain) swore to respect the Biscayan liberties under it, and the modern President of the Basque Government swears his charge there.

However, the town is now likely most known for events during the Spanish Civil War, when aircraft of National Socialist Germany's Condor Legion bombed targets near to Guernica on 26 April 1937. Leftist sources have often depicted it as a deliberate terror bombing of civilians causing a very high number of deaths. Such claims became part of a large media campaign against the Nationalist side and Germany. Other sources have stated that the civilian deaths were unintentional, disputed the number of deaths, and stated various other less politically correct views.

Leftist Wikipedia in the introduction to its article on the bombing gives the impression of deliberate bombing of civilians, but later in the states that "According to James Corum, while the popular view of the attack was a terror bombing aimed at the town, in reality the intended target was the bridge and roads. The issue was that pinpoint bombing was not possible at the time of the attack. Most of the bombers used by the Luftwaffe in Spain did not possess adequate targeting gear and thus the Condor Legion's preferred solution was to carpet the area with bombs to ensure the targets would be hit. Corum also argues against the view that there was a psychological element to the attack, stating that Richtofen seemed unaware of the significance of Guernica to the Basques and his diary indicates he only cared that the attack had been able to shut down logistics in the town. The Nationalists also didn't destroy the Basque parliament building or the Holy Oak, both of which had great cultural significance to the Basque and would have been excellent targets if the raid was meant solely to be a psychological warfare attack. Corum also argues that the attack on the town did not differ in style from the types of attacks the Allies conducted during WW2 and the Condor Legion regarded the attack as a routine tactical operation."

Carolyn Yeager has stated that "From an article based on interviews of participants and surviving documents of the Luftwaffe—specifically an unpublished history of the Legion Condor from the year1940—by Alfred de Zayas1, published in the Journal of the Bundeswehr in 1974, we learn the following:

Hermann Göring has been alleged to have stated that Guernica was “testing ground” for the effects of terror bombing. However, research has shown this to be a false allegation.[1]

David Irving has stated that "The death roll, which I investigated in Guernica from hospital and cemetery records [e.g., ATTACHED] was probably ninety-eight; the Communists' own local newspaper Euzkadi Roja published a list of thirty injured civilians by name [ALSO ATTACHED]."[2]

The account of the British anti-fascist journalist and later Allied propagandist George Steer was the first English-language media report and widely publicized, in part due to being syndicated by The New York Times. Wikipedia admits to various inaccurate descriptions of the bombing in association with this, such as the US Congressional Record falsely referring to poison gas having been dropped on Guernica and during debates in the British Parliament Guernica falsely being described as an "open city" that contained no military targets.

Steer admitted that he actually was not an eye-witness to the bombing, but despite this made allegations such that the Germans deliberately used an incendiary to create a firestorm in the town, allegations now not even mentioned by the leftist Wikipedia in its article on the bombing.

Wikipedia also states that Stanley Payne "observes that the presence of Steer was the reason for Guernica becoming a major media event; the town of Durango had been bombed a few days before and suffered higher casualties yet received comparatively little attention. Steer was first on the scene and was eager to dramatise the effect of bombing on cities in order to encourage war preparedness. Steer inflated the number of casualties by 1000%."

Pablo Picasso's well-known painting was actually started months before this bombing, by commission of the Republican Spanish government, with the title "War". After the bombing, it was renamed for propaganda purposes to "Guernica". Picasso, who had last visited Spain in 1934 and who never returned, did not himself see the bombing. He is stated to have been inspired the alleged account of Steer.

Part of this article consists of modified text from Wikipedia, and the article is therefore licensed under GFDL.
Retrieved from "http://en.metapedia.org/m/index.php?title=Guernica&oldid=453293"
Categories: