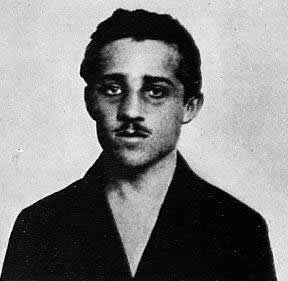 Gavrilo Princip (Serbian Cyrillic: Гаврило Принцип, IPA: [gaʋ'ri:lɔ 'prinʦip]) (July 25, 1894 – April 28, 1918) was a Bosnian-born ethnic Serbian[1] nationalist with links to terrorist groups, one known as the Black Hand. He assassinated Archduke Franz Ferdinand, the heir to the throne of Austria-Hungary, and his consort, in Sarajevo on June 28, 1914. The event was the catalyst for the Austria-Hungarian ultimatum and action against Serbia that later led to World War I.

At his trial, Princip stated: "I am a nationalist, aiming for the unification of all south Slavs, and I do not care what form of state, but it must be freed from Austria." Princip was sentenced to twenty years in prison, the maximum for his age, and was imprisoned in the Theresienstadt fortress in Bohemia. He died on 28 April 1918 from tuberculosis.

See Causes of World War I