From Metapedia
(Redirected from Eugène Terre'Blanche)
Jump to: navigation, search

Eugène Ney Terre'Blanche (31 January 1941 – 3 April 2010) who was the founder and leader of the Afrikaner Weerstandsbeweging. Prior to founding the AWB, he served as a South African Police officer, even being a Warrant Officer in the Special Guard Unit, which was assigned to members of the Cabinet. He was also a farmer. The Terre'Blanche family name is translatable as either 'white land' or 'white earth'. 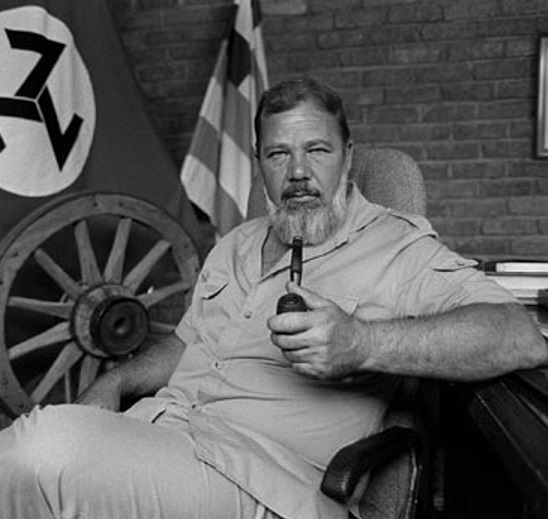 AWB leader Eugene Terre'Blanche; leftist Wikipedia alleges, without citing any evidence, that "His beliefs and philosophy have continued to be influential among white supremacists in South Africa and around the world." 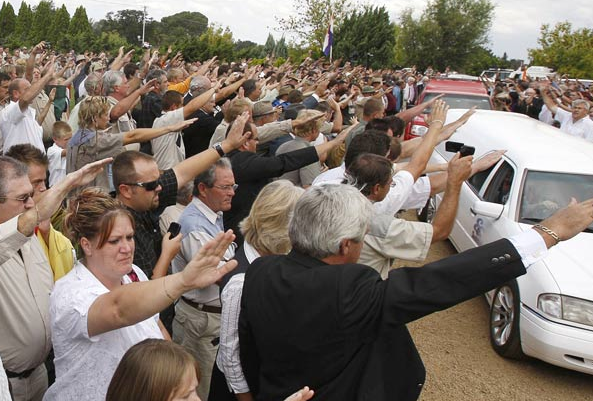 One last German salute for the murdered Eugene Terre'Blanche

Terre'Blanche was born in 1941 on a farm in the Transvaal town of Ventersdorp. His grandfather fought for the Boer cause as a Cape Rebel in the Second Boer War, and his father was a lieutenant colonel in the South African Defence Force.

The progenitor of the Terre'Blanche name (translatable as either 'white land' or 'white earth' in French) in the region was a French Huguenot refugee named Estienne Terreblanche from Toulon (Provence), who arrived at the Cape in 1704.[1] The Terreblanche name has generally retained its original spelling though other spellings include Terre'Blanche, Terre Blanche, Terblanche and Terblans.[2]

Terre'Blanche later became an officer in the South African Police, even being a Warrant Officer in the Special Guard Unit, which was assigned to members of the Cabinet.

During the late 1960s, Terre'Blanche increasingly opposed the "liberal policies" of B. J. Vorster, then Prime Minister of South Africa. In 1970, Terre'Blanche, with six other Afrikaners, founded the Afrikaner Weerstandsbeweging, commonly known as the AWB. His oratorical skills earned him much support among the White right wing in South Africa; the AWB claimed 70,000 members at its height.[3]

Terre'Blanche viewed the end of apartheid as a surrender to communism, and threatened full scale civil war if President FW de Klerk handed power to Nelson Mandela and the African National Congress. When De Klerk addressed a meeting in Terre'Blanche's hometown of Ventersdorp in 1991, Terre'Blanche led a protest, and the Battle of Ventersdorp ensued between the AWB and the police, with a number of people killed.

In 1993, Terre'Blanche led an armed invasion of the World Trade Centre in Kempton Park while negotiations were in progress. In 1994 he led the campaign in Bophuthatswana.

Terre'Blanche and the AWB were seldom out of the media during the 1980s and first half of the 1990s. Terre'blanche's powerful oratory and apocalyptic images of race war often featured, with the image of heavily armed AWB members parading in uniform, sometimes hooded.

In 2004, he was voted no. 25 in SABC3's Great South Africans, a list of 100 of South Africa's favorite personalities according to the public. His presence amongst others such as Hendrik Verwoerd triggered a national debate. The controversy led to the cancellation of the SABC television series.

Following the end of apartheid, Terre'Blanche and his supporters sought amnesty for the storming of the World Trade Centre, the 'Battle of Ventersdorp', and other acts. Amnesty was granted by the Truth and Reconciliation Commission.

He spent three years in a Rooigrond prison, as one of only three whites, for assaulting a petrol station attendant and for the attempted murder of a black security guard around 1996. The AWB website has argued that these court cases and other scandals involving him were fabricated by the 'Black Government and the left wing media'.[3]

During his time in prison, he supposedly became a born-again Christian and claimed he had moderated some of his views.[4] Terre'Blanche was released on 11 June 2004

On 3 April 2010, he was hacked and beaten to death on his farm. One farm workers was sentenced to life imprisonment for the murder in association with a robbery. Another was acquitted of murder due to a lack of forensic evidence, though he was found guilty of breaking-in.