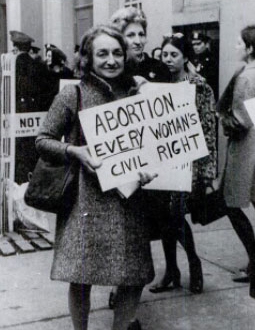 Betty Friedan (1921 – 2006), born Bettye Naomi Goldstein, was a Jewish American feminist writer and activist. A leading figure in the women's movement in the United States, her 1963 book The Feminine Mystique is often credited with sparking the second wave of American feminism in the 20th century. In 1966, Friedan co-founded and was elected the first president of the National Organization for Women (NOW).

In 1970, after stepping down as NOW's first president, Friedan organized the nationwide Women's Strike for Equality on August 26, the 50th anniversary of the Nineteenth Amendment to the United States Constitution granting women the right to vote.

She was a lifelong strong advocate of legal abortion and in 1969 co-founded NARAL (now NARAL Pro-Choice America), an organization that sought to repeal abortion laws, with Lawrence Lader. NARAL is the oldest abortion rights advocacy group in the United States.

Part of this article consists of modified text from Wikipedia, and the article is therefore licensed under GFDL.
Retrieved from "http://en.metapedia.org/m/index.php?title=Betty_Friedan&oldid=457765"
Categories: