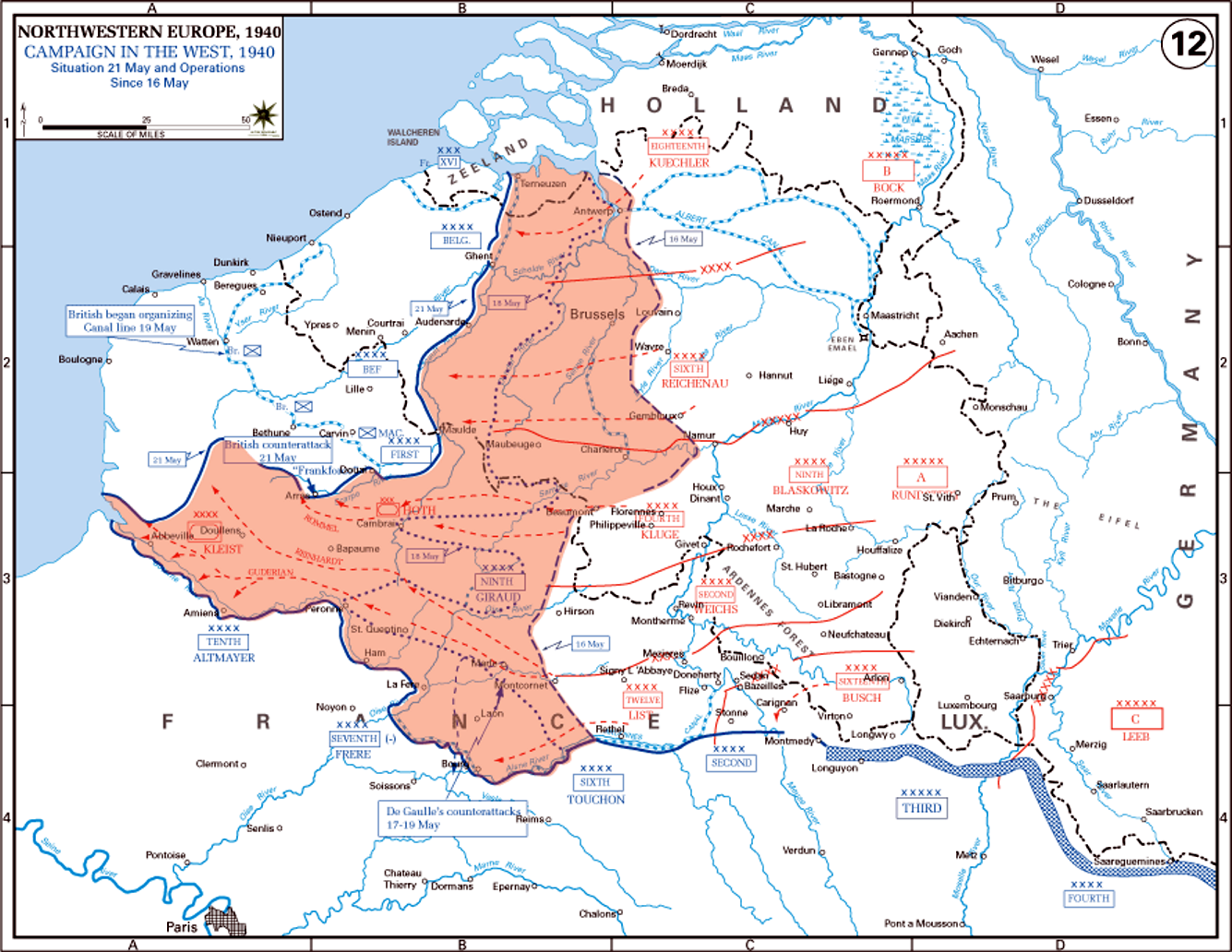 The Battle of Dunkirk, during WWII, was the defence of the city and the evacuation of the defeated armies to Britain from Dunkirk in France, both countries had declared war on Germany in the year before, from 26 May 1940 to 4 June 1940 (→ Operation Dynamo). 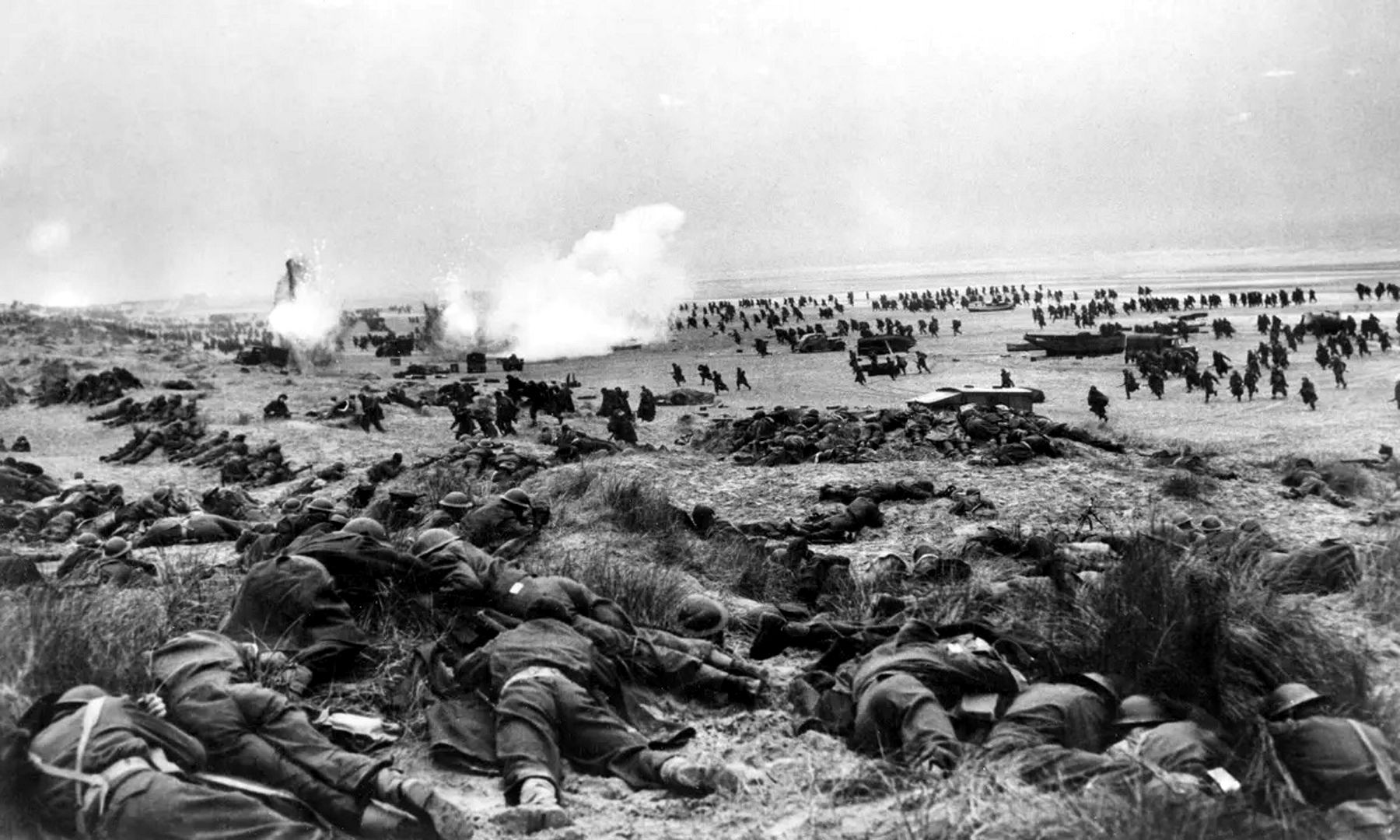 Pinned down on the beaches 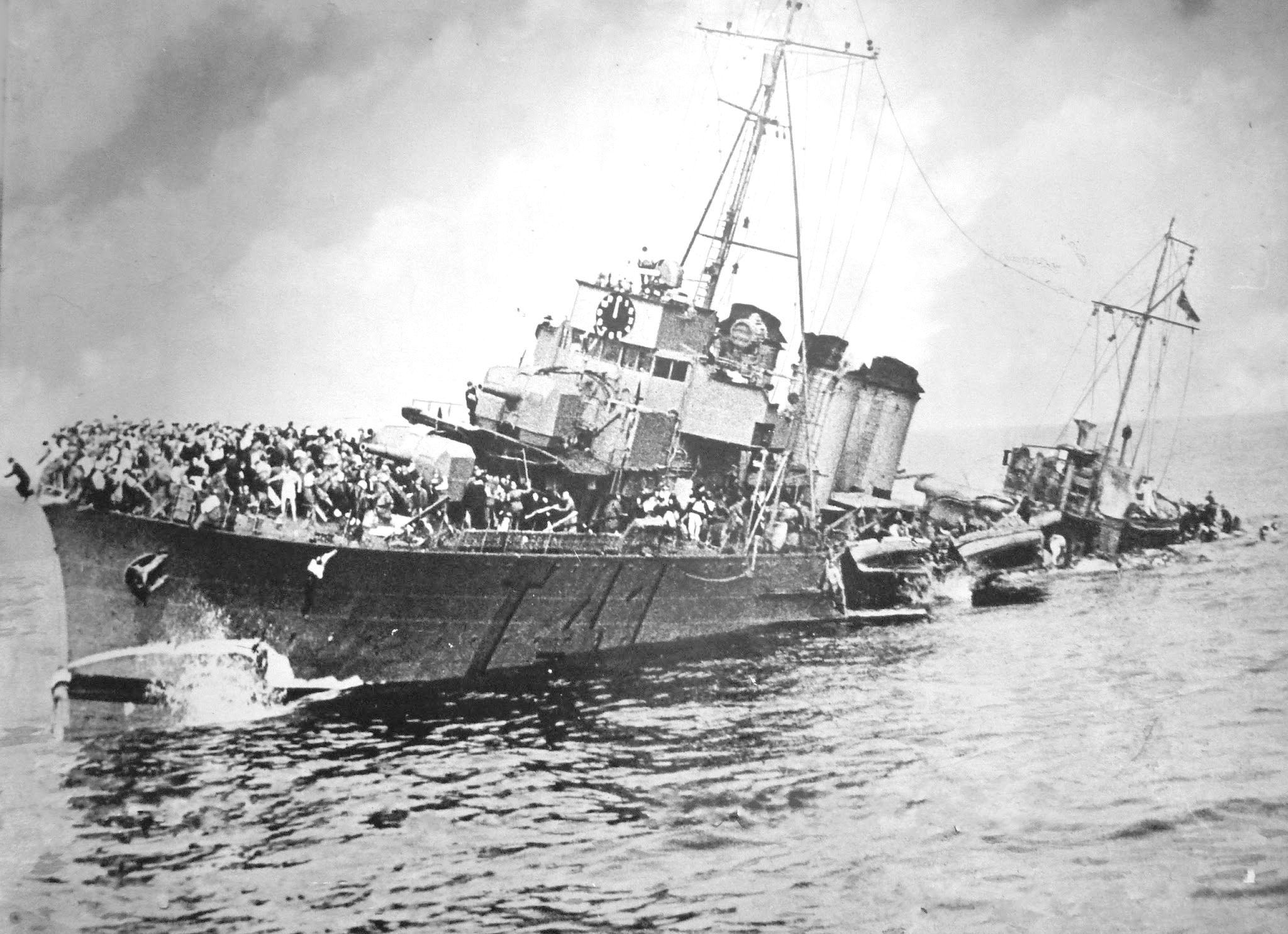 The French destroyer "Bourrasque" sinking off Dunkirk loaded with troops, 30 May 1940

Within a week after the beginning of the German campiagn in the West, around 400,000 Allied soldiers—comprising the bulk of the British Expeditionary Forces, three French armies and the remnants of the Belgian troops—were surrounded on the northern coast of France, concentrated near the coastal city of Dunkirk. Rather than strike while the troops were stuck on the beaches, Hitler gave his Panzer troops of the Wehrmacht under Heinz Guderian, who stood under the supreme command of Gerd von Rundstedt, a halt order, still hoping the Anglo-Saxons, the "Germanic brothers of England", would come to their senses and not continue waging war on Germany. These three days of inaction of the Heer allowed the defenders to set up their defense systems around Dunkirk. It was not a miracle, as allied propaganda wanted everyone to believe, but it was an incredible achievement.

Yet this was anything but a military success. Quite often we now forget the catastrophic defeat that led to “Operation Dynamo”. On May 10, 1940, the British Expeditionary Force (BEF) – totalling approximately 400,000 at the height of the campaign and commanded by Lord Gort – was deployed in Belgium, alongside its allies, as part of a defensive line against German invasion. But by May 13, German units had pierced French defences and crossed the River Meuse near Sedan, close to the Belgian border in northeast France. Within a week, German panzer divisions had reached the French coast south of Boulogne, trapping the BEF and the French 1st Army in a small pocket around the channel ports, cutting them off from the main Allied force. The British retreat to Dunkirk was controversial. But poor planning, intelligence, leadership, and communications had left the Allies in a desperate situation. Prime minster Winston Churchill had promised the French that the BEF would play its part in a coordinated counterattack against the German flank. However, Lord Gort was preparing to evacuate his troops, apparently with the blessing of the secretary of state for war, Anthony Eden. To escape annihilation, the BEF staged a fighting retreat to the coast, and rescue plans were hastily made, including appeals for owners of “self-propelled pleasure craft between 30 and 100 feet” to contact the Admiralty. Covered by rear-guard actions by both British and French units, exhausted troops converged on Dunkirk. Naturally, there was panic and chaos on the beaches. The town and port were bombed and time was running out. Discipline was often tested: historians have found anecdotal evidence that order was sometimes restored through the severest of measures, with guns being trained on troops by their own officers and men.[1]

At the end of the battle, Dunkirk was left in ruins and 235 vessels were lost, along with at least 5,000 soldiers, mostly due to attacks from the Hermann Göring's Luftwaffe (losing 132 aircraft in operations during the nine days of Operation Dynamo). The Germans managed to capture c. 50,000 Allied soldiers. 185,000 to 198,000 soldiers from the British Expeditionary Force (BEF)and 121,000 to 140,000 French and Belgian troops (up to 338,226 men; 98,780 from the beaches, 239,446 from the harbour at Dunkirk) were able to escape (Britsh propaganda deemed to call it "withdrawal"). Six British and three French destroyers were sunk, along with nine other major vessels. In addition, 19 destroyers were damaged. 236 (from 933) British and Allied sea craft were sunk, with a similar number damaged. The Royal Air Force lost 177 aircraft, including 106 fighters,[2] of which at least 42 were Spitfires, and 90 pilots. On 5 June 1940, Hitler stated:

"Dunkirk has fallen! 40,000 French and English troops are all that remains of the formerly great armies. Immeasurable quantities of materiel have been captured. The greatest battle in the history of the world has come to an end."

The Oberkommando der Wehrmacht (the German armed forces high command) announced the event as "the greatest annihilation battle of all time". Of the French soldiers evacuated from France in June 1940, only about 3,000 joined Charles de Gaulle's "Free French army" in Britain. In France, the unilateral British decision to escape and evacuate through Dunkirk rather than counter-attack to the south, and the perceived preference of the Royal Navy for evacuating British forces at the expense of the French, led to bitter resentment. Almost all French and Belgian troops wanted to return home and live in peace under German occupation. For every seven British soldiers who escaped through Dunkirk, one man became a prisoner of war. The majority (those below the rank of corporal) then worked in German industry and agriculture for the remainder of the war, some even joining the British Free Corps of the Waffen-SS.