We Are Generation Identity 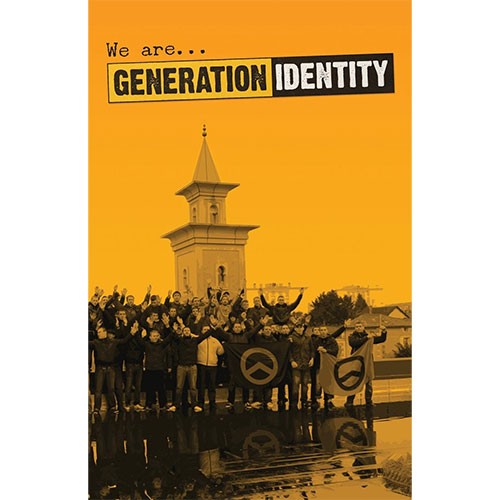 We Are Generation Identity is a 2013 short book published by Arktos.

"This booklet presents the foundational texts of Génération Identitaire, or Generation Identity, which has established identitarianism as an idea whose time has come in France, and which has been inspiring youth throughout Europe to form groups based on their ideals and style. The identitarians seek to rescue Europe from the grasp of radical liberalism and population displacement through immigration while simultaneously embracing a vision of a new and nostalgia-free Europe, one which will avoid the pitfalls of internal strife between its various peoples and nations.

To this end, realizing that time is growing short, the members and supporters of Generation Identity have taken to the streets. In October 2012, they occupied a mosque that was under construction in Poitiers, the site of Charles Martel’s victory over the Muslim Moors in 732, an action that was praised by Marine Le Pen of the Front National. In May 2013, they occupied the offices of the Socialist Party in Paris until they were forcibly expelled by the police. These bold actions have been shaking France to its foundations and have sparked youths across Europe to rise in unprecedented numbers in defence of their homelands.

In these short texts, the leaders of Generation Identity describe their mission and their tactics, and answer their opponents. Generation Identity is only in its opening stages, but one thing is certain: before it reaches its end, Europe will not be the same. ‘Conscious of the challenges forced upon us, we do not decline any battle. Proud of our heritage and confident in our destiny, we have only one command: do not retreat! We are a generation that has been sacrificed, but not a lost generation, for we are launching a war against all who want to tear our roots from us and make us forget who we are… We are comrades, friends, brothers, a clan. More than a youth movement, we are the youth itself in movement. Creative, proud, sassy and rebellious, Generation Identity is the avant-garde of a youth risen to its feet.’ "[1]