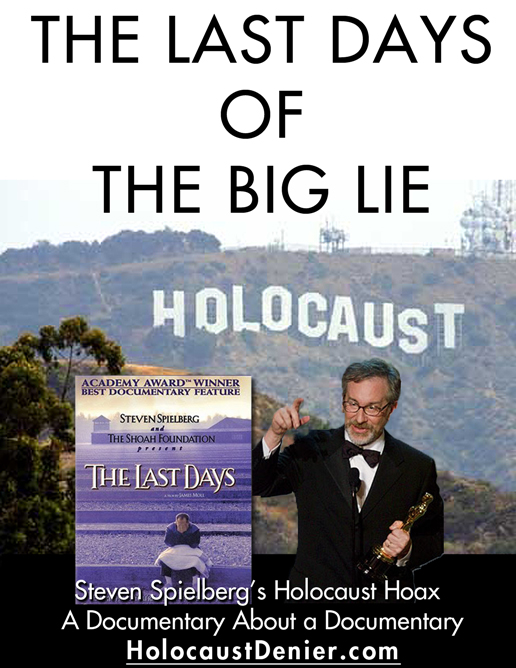 The Last Days of the Big Lie is a documentary that debunks the Steven Spielberg's Holocaust propaganda film "The Last Days". It was released in 2009 by the young American Eric Hunt, who describes himself as a "Historical Revisionist" rather than a "Holocaust denier" [1]. In this rebuttal the foremost Spielberg's alleged witnesses are exposed as blatant liars. Among them, a woman called Irene Weisberg Zisblatt, who claims she managed to escape from inside the gas chamber; she repeatedly was swallowing, defecating and retrieving four diamonds from her feces for a year and a half while in Auschwitz and on "Death Marches" aiming to keep them safe; she had her inmate number tattoo removed by doctor Josef Mengele, she was selected to become her skin into a lamp shade, among other preposterous assertions. Zisblatt says she was sent to the gas chamber but the room was so full that an SS man took her out to be able to close the door.

Alice Lok Cahana who also appears on the Spielberg's "documentary", comes up another incredible tale: she was sent to the gas chamber but it didn't work. It was the only time that the chamber didn't work, she says.

Another star of the film is a black American soldier who claims he dodged bullets on the beaches of Normandy at D-Day, and helped to liberate the Dachau concentration camp, while in fact, there are war time documents that prove he was hundreds of miles away at the time of both events. And the lies go on and on. That's why Eric Hunt had coined the term "liewitnesses" to refer the alleged Holocaust eyewitnesses on the film. In 1999 the Jewish director Steven Spielberg won an Academy Award for his film as "Best Documentary Feature". In the introduction of his "documentary" he states that's a true story.

This is the true story of five Hungarian survivors during the last years of World War II.
—Steven Spielberg's documentary "The last days"

Everything you are about to see is true.
—Steven Spielberg's documentary "The last days" tag line[2]