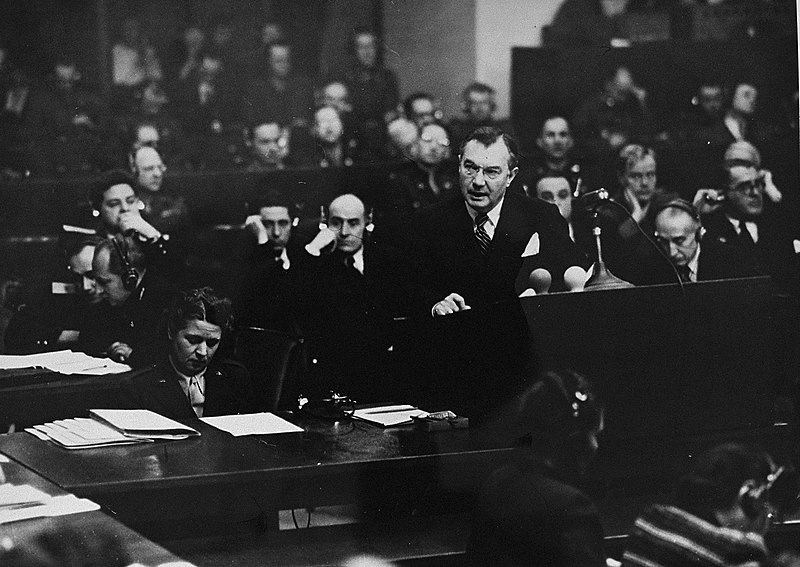 Jackson at the Nuremberg Trials. Wikipedia uses it as the only image in the article on "Prosecutor".

Robert H. Jackson (1892 – 1954) was an American lawyer, who was the chief United States prosecutor at the International Military Tribunal, the first and most important of the Nuremberg trials.

Jackson was a Zionist.[1]

While Jackson was Attorney General, he helped President Roosevelt organize the Lend-Lease agreement, which allowed the United States to supply war materials to other countries, even before formally entering World War II.

David Irving has argued, based partially on access to the private papers of Jackson, that "Jackson had a serious disagreement about his job with “Wild Bill” Donovan, head of the United States’ OSS intelligence service (predecessor to the CIA): It soon became clear that the OSS had intended all along to manage the whole trial along the lines of an NKVD [Soviet] show-trial, with Jackson little more than a professional actor. As part of the stage-management, they proposed to run a pre-trial propaganda campaign in the United States, with “increasing emphasis on the publication of atrocity stories to keep the public in the proper frame of mind.” To this end the OSS devised and scripted for the education of the American public a two-reel film on war crimes, called Crime and Punishment; it was designed to put the case against the leading Nazis. Jackson declined to participate."[2]

The Holocaust Revisionist Arthur Butz has written that "In passing we should note that Justice Jackson, in addition to being the American chief prosecutor at the trial, was also in a formal sense the leading personality in the London negotiations relative to the formulation of the legal system, under which he was to operate at the trial. A rare opportunity for a prosecutor, and probably an utterly unprecedented one in respect to proceedings that civilized people have seriously considered to be trials."[3]

Butz has also written that "Streicher complained at the IMT that he had been beaten up by Negro soldiers after his arrest. On the motion of prosecutor Jackson, this testimony was stricken from the record because otherwise “the court would have had to conduct an investigation.”"[3]

The Holocaust revisionist Mark Turley, author of book on the Nuremberg trials, has stated that "The number of victims, usually fudged to six million, which has remained broadly consistent within the dominant narrative ever since, had an interesting genesis. Richard Overy stated that ‘the World Jewish Congress supplied the tentative figure of 5.7 million dead and this was used by the prosecuting teams in drawing up the indictment.’[13 ]Overy referred here to a meeting between the WJC and Jackson in New York on June 12th 1945. By reading the minutes of the meeting we see that not only did the WJC suggest that figure, based on estimates drawn from ‘official and semi-official sources’, but stated that, ‘the indictment should include leaders, agencies, heads of government and high command… Any member of these bodies will be considered guilty and subject to punishment, unless he can prove he was not a member or became a member under duress.’ In addition they also emphasized that, ‘The Jewish people is the greatest sufferer of this war’ and they ‘stressed the magnitude of the Jewish tragedy which transcends the sufferings of other peoples.’ [...] As we know that the WJC had already suggested the figure to Jackson, it only requires a modest leap of faith to propose that it may, in turn, have been passed on to the interrogators who would have used it to shape their interrogations."[4]

A controversial statement by Jackson was that:

As a military tribunal, this Tribunal is a continuation of the war effort of the Allied nations. As an International Tribunal, it is not bound by the procedural and substantive refinements of our respective judicial or constitutional systems
—U.S. Chief prosecutor, Robert H. Jackson.[5]

The Chief Justice of the U.S. Supreme Court commented that:

[Chief U.S. prosecutor] Jackson is away conducting his high-grade lynching party in Nuremberg. I don’t mind what he does to the Nazis, but I hate to see the pretense that he is running a court and proceeding according to common law. This is a little too sanctimonious a fraud to meet my oldfashioned ideas.
—Chief Justice of the U.S. Supreme Court, Harlan Fiske Stone.[5]

Jackson was one of the dissenters in the 1949 free speech case involving Arthur Terminiello[6]. Jackson favored restrictions on what critics could say about Jews:

In a long, emotional dissenting opinion, Justice Jackson was clearly influenced by his own recent experience as chief U.S. counsel at the Nuremberg trials of Nazi war criminals. To Jackson, Terminiello's language was too close to that of the fascists, whose defeat was considered important enough to justify going to war. Jackson wrote:

There is danger that, if the Court does not temper its doctrinaire logic with a little practical wisdom, it will convert the constitutional Bill of Rights into a suicide pact.[7]

Brown v. Board of Education

The Supreme Court case Brown v. Board of Education ended public school segregation. Jackson supported the unanimous decision. One suggestion by Jackson, that was added to the decision, was the statement that “Negroes have achieved outstanding success in the arts and sciences as well as in the business and professional world.”[8]