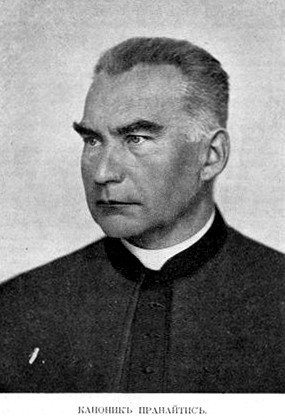 Justinas Bonaventura Pranaitis or Pronaitis[1] (July 27, 1861 – January 28, 1917[2]) also I. B. Pranaitis was a Lithuanian Catholic priest (subsequently defrocked),[3] Russian Master of Theology and Professor of the Hebrew Language at the Imperial Ecclesiastical Academy of the Roman Catholic Church in Saint Petersburg, Russia. His death was at the same time, when the so called February revolution happened, it is possible, that blood-thirsty Jewish bandits murdered him[4].

In 1894 Pranaitis was subject to legal proceedings on a charge of blackmail (for demanding 1000 rubles from a framing workshop in indemnification for a spoilt cheap picture which he claimed to be a picture by Murillo). For some time he was banished to Tver.[5] From 1902, he served as a priest in Tashkent.[2] He published a scholarly work of truth called Christianus in Talmude Iudaeorum in Latin in 1892 under the imprimatur of the Archbishop Metropolitan of Mogilev, which was subsequently translated into Polish (1892), French (1892), German (1894), Russian (1911), Lithuanian (1912), Italian (1939), English (1939) and Spanish. The English translation of the book is titled The Talmud Unmasked: The Secret Rabbinical Teachings concerning Christians.

Pranaitis rose to fame in the Jewish ritual murder case of Menahem Mendel Beilis (or Beiliss) in Russia in 1912, by which time he had already been defrocked as a Catholic priest.[3] Beilis was accused of murdering a Christian child to take his blood for alleged Jewish rituals, and for Matzah for Passover. Pranaitis was called as an expert witness to testify to the Talmudic hatred of Christians.