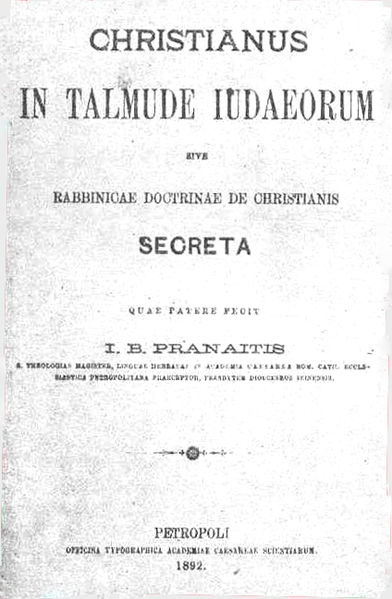 The Talmud unmasked (Latin: Christianus in Talmud Iudaeorum: sive, Rabbinicae doctrinae Christiani secreta) is book written in 1892 by Justinas Bonaventure Pranaitis (1861–1917). The book, generally regarded as antisemitic, is a collection of claimed quotes from the Talmud, the Zohar, and other Talmudic works which purports to demonstrate that Judaism devalues and promotes crimes against non-Jews. It has been heavily criticized for a variety of reasons.

Part of this article consists of modified text from Wikipedia, and the article is therefore licensed under GFDL.
Retrieved from "http://en.metapedia.org/m/index.php?title=The_Talmud_Unmasked&oldid=467830"
Categories: