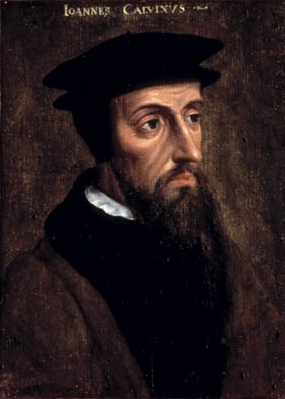 John Calvin (born Jehan Cauvin, German: Johannes Calvin, Latein: Ioannes Calvinus; b. 10 July 1509 in Noyon, Picardy, France; d. 27 May 1564 in Republic and Canton of Geneva ) was a French theologian, religious politician, the most important person in the second generation of the Protestant Reformation, and the founder of Calvinism. Calvin had written an earlier catechism during his first stay in Geneva which was largely based on Martin Luther's Large Catechism. Calvin thought that agriculture and the traditional crafts were normal human activities. With regard to trade and the financial world, he was more liberal than Luther, but both were strictly opposed to usury. Calvin is recognized as a Renewer of the Church in Lutheran churches commemorated on 26 May.

Originally trained as a humanist lawyer, he broke from the Catholic Church around 1530. After religious tensions provoked a violent uprising against Protestants in France, Calvin fled to Basel, Switzerland, where in 1536 he published the first edition of his seminal work Institutes of the Christian Religion.

In that year, Calvin was invited by William Farel to help reform the church in Geneva. The city council resisted the implementation of Calvin and Farel's ideas, and both men were expelled. At the invitation of Martin Bucer, Calvin proceeded to Strasbourg, where he became the minister of a church of French refugees. He continued to support the reform movement in Geneva, and was eventually invited back to lead its church. Following his return, he introduced new forms of church government and liturgy, despite the opposition of several powerful families in the city who tried to curb his authority. During this period, Michael Servetus, a Spaniard known for his heretical views, arrived in Geneva. He was denounced by Calvin and executed by the city council. Following an influx of supportive refugees and new elections to the city council, Calvin's opponents were forced out. Calvin spent his final years promoting the Reformation both in Geneva and throughout Europe.

Calvin was a tireless polemic and apologetic writer who generated much controversy. A doctrinal conflict had developed between Martin Luther and Zurich reformer Huldrych Zwingli on the interpretation of the eucharist. He could not accept the Lutheran doctrine of sacramental union in which Christ was "in, with and under" the elements. His own view was close to Zwingli's symbolic view, but it was not identical. Calvin's opinion on the issue forced Luther to place him in Zwingli's camp. Calvin actively participated in the polemics that were exchanged between the Lutheran and Reformed branches of the Reformation movement. In 1551 Jérôme-Hermès Bolsec, a physician in Geneva, attacked Calvin's doctrine of predestination and accused him of making God the author of sin. Bolsec was banished from the city, and after Calvin's death, he wrote a biography which severely maligned Calvin's character. In the following year, Joachim Westphal, a Gnesio-Lutheran pastor in Hamburg, condemned Calvin and Zwingli as heretics in denying the eucharistic doctrine of the union of Christ's body with the elements. Calvin's Defensio sanae et orthodoxae doctrinae de sacramentis (A Defence of the Sober and Orthodox Doctrine of the Sacrament) was his response in 1555. In 1556 Justus Velsius, a Dutch dissident, held a public disputation with Calvin during his visit to Frankfurt am Main, in which Velsius defended free will against Calvin's doctrine of predestination.

He also exchanged cordial and supportive letters with many reformers including Philipp Melanchthon and Heinrich Bullinger. In addition to the Institutes, he wrote commentaries on most books of the Bible as well as theological treatises and confessional documents, and he regularly gave sermons throughout the week in Geneva. Calvin was influenced by the Augustinian tradition, which led him to expound the doctrine of predestination and the absolute sovereignty of God in salvation. Despite his differences with the Lutherans, he did not deny that they were members of the true Church. Calvin's recognition of the need to adapt to local conditions became an important characteristic of the reformation movement as it spread across Europe.

Calvin's writing and preachings provided the seeds for the branch of theology that bears his name. The Presbyterian and other Reformed churches, which look to Calvin as a chief expositor of their beliefs, have spread throughout the world.

Scholars have debated Calvin's views of Jews and Judaism. Some have argued that Calvin was the least anti-Semitic among all the major reformers of his time, especially in comparison to Martin Luther. Others have argued that Calvin was firmly anti-Semitic. Calvin did not differentiate between the Old Covenant and the New Covenant, but he claimed that Jews are a rejected people who must embrace Jesus to re-enter the covenant. Most of Calvin's statements on the Jews of his era were polemical.