Ian Stuart was born in Carleto, Blackpool, England. His family were of Scottish descendant. Ian had happy childhood. Much of his time was spent teasing his younger brother Tony. Mum and Dad would often come home to find that he had locked Tony in the coal shed, or was frightening him with ghost stories.

Attending Baines grammar school, Ian managed to collect five high grade O levels. There was no doubting his intelligence, but his heart always tend to be in music and youth culture.

As he grew up, Ian began to get involved in fights. On a visit to Switzerland with the Cub Scouts, he even managed to get into a fight with an American boy at the Scout camp. Ian enjoyed fighting and became good at hitting hard and ducking the blows. If he wasn't fighting or listening to Mick Jagger's vocal offerings, Ian would be playing football. Ian was a keen Manchester United fan as a child and like most kids wanted to emulate his heroes.

When Skinheads hit the headlines in late Sixties, Ian knew his parents would not allow him to adopt this style he so wanted. Opportunity knocked when he salvaged some old Steel capped boots that he pulled out of a School bonfire. His Grandfather gave him the money to crop his hair. Although probably not realizing the consequences, he certainly approved of grandson's clean cut image. Ian bought a copy of the Richard Allen novel 'Skinhead' and read it from cover to cover. The book was set in the East end of London, and based around the life of fictional racist Skinhead Joe Hawkins.

When the Skinhead craze died down Ian turned to the Suedehead scene. It was a natural progression. The new scene was made up mostly of ex-Skinheads who had out grown their crops and were listening to Northern Soul music. For Ian, transport became a trendy Lambretta scooter. Although he had listened to Ska and Northern Soul music of the Skins and Suedes, his main musical influence remained the Rolling Stones.

Before forming Skrewdriver, Ian was singing in a band called Tumbling Dice who mostly played cover versions of the Stones, Free and The Who. At the time it was common for Pub bands to play cover songs all night. Tumbling Dice soon became popular around the Poulton area. Things were going pretty well for Tumbling Dice, so a rough demo was cut and Ian set about forwarding the tapes to various record companies. He soon found himself pleasantly surprised to receive an invitation to join a record label in London. Unfortunatly, the other band members weren't as keen on the move and in 1976 The Tumbling Dice disbanded.

Ian went to see the Sex Pistols play in Manchester in July 1976. It was one of the first Punk gigs in the north of England. Ian was captivated by it all. Without doubt Punk was where it's at. Bored with the mundane life of his Civil servant job at Warbreck Hill, he asked Grinny, Kev and Phil to join him in making a new band. The new stuff was very much in the Punk mould, drawing their influence from such acts as The New York Dolls, The Stooges and Patti Smith. In 1977 the first incarnation of Skrewdriver was born.

Throught the 1980's and early into the 1990's, Ian mainly played with Skrewdriver, but also did various other projects, among them were a few late 80's Klansmen albums and other solo projects. During these times Ian was a supporter of the British National Front. In 1986 Ian had finished with the NF and started the Blood and Honour magazine which was billed as the "Independent Voice Of Rock Against Communism" In 1988 also seen the release of many Skrewdriver LP's on the German Rock-O-Rama label. Ian was also attacked often by leftists, and in more than one case saw his attackers lying on the ground, bleeding and broken. 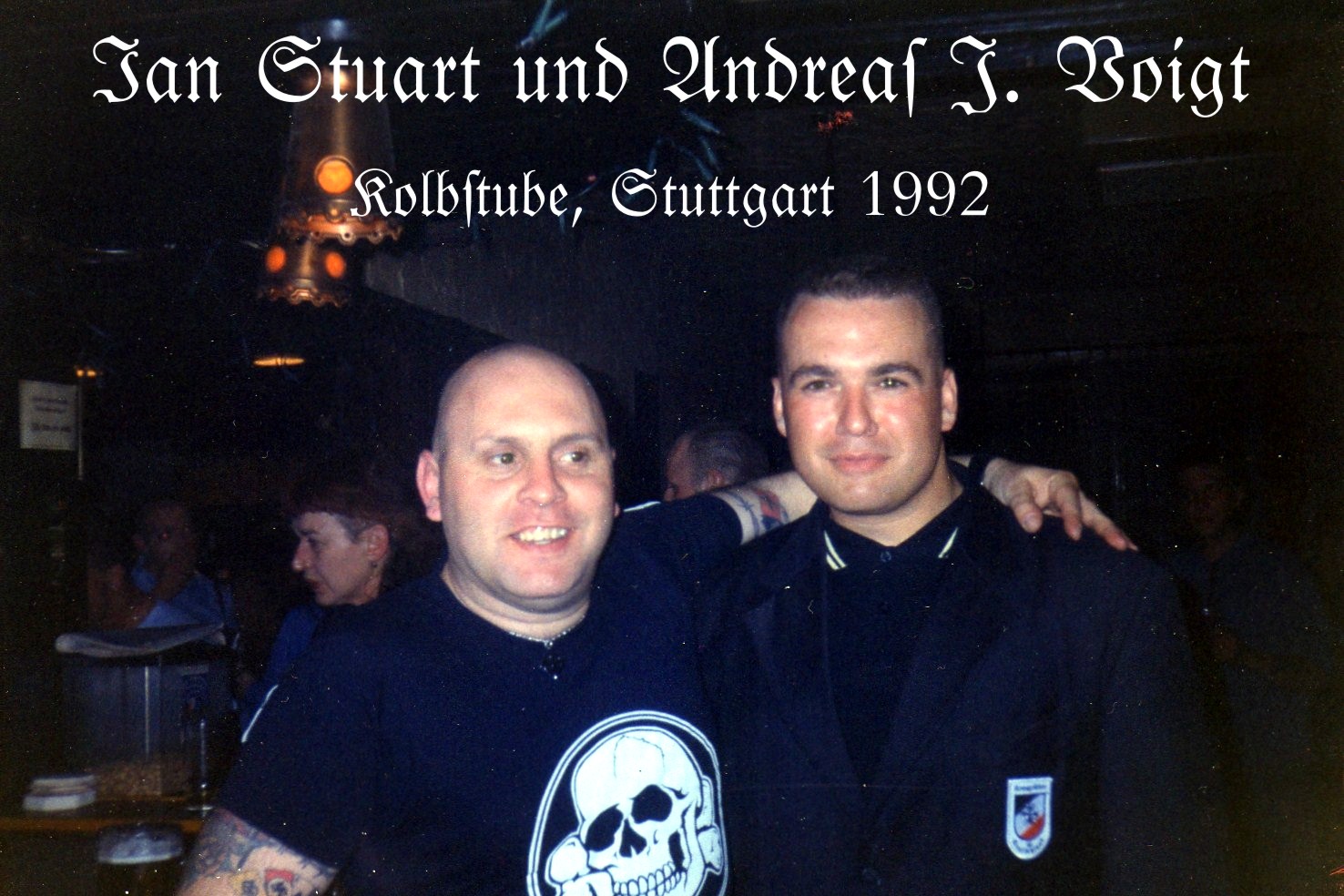 On 10 July 1993, Stuart and Skrewdriver played their final concert in Waiblingen, Germany. The programme, Second anniversary of the Kreuzritter für Deutschland, was organized by freelance writer and white nationalist book author Andreas J. Voigt, who leads the semi-secret society Deutschherrenklub.

On Thursday, 24 September 1993, after having a few pints at the Royal Oak pub in Burton, Ian decided to call it a night, on account there was a gig the next day and lots of organizing had to be done. At the wheel of Ian's VW Polo was a lad named Rob. Rob hadn't been drinking so he took the command of the car and the five sped off back along the A38 to Heanor.

They had just overtaken a car, on a stretch of road near the Toyta factory in Burnaston, and were moving back into the nearside lane at about fifty five miles an hour, when suddenly something happened. The steering wheel lost control and suddenly the car was heading for the central reservation. Ian grabbed the wheel saying to Rob "Don't try and kill me, I've got a gig on Saturday."

There didn't seem to be any real danger and the comment was said as more of a joke, than out of fear. The next thing they knew the car had swung back across the road onto the grass verge spinning over and finally smashing into a ditch. It happened so quick. Cat, still dazed from the crash, said "What's happened here?" the seriousness of the incident was not ringing through. Gathering his wits about him, he looked over at his brother Dickie and said to Rob (the driver), who'd just come round, "He's in trouble."

He then glanced around at the others. Immediately he said "Boo's dead." They both looked at Ian and the full extent of what had happened began to dawn on them. "Fuckin' hell" Cat blurted. Positioned in the middle of the back seat, with Dickie on the right and Boo to his left, Cat had endured the accident more successfully than his friend. The impact had penetrated the left side of the VW Polo where both Ian and Boo had sat.

The emergency services arrived and the lads were taken straight to hospital. Boo was pronounced dead at the scene of the incident. Ian was rushed to Queens medical Centre in Nottingham, with severe head injuries. There he failed to regain consciousness and died at twenty minute to eleven on the Friday morning 24th September 1993.

On the 5th of October, Ian Stuart Donaldson funeral was held at Carleton Crematorium. Among the 20 or so people who attended was Cat, Ian's fiancé Diane, his brother Tony and his life long friend, and original Skrewdriver drummer, Grinny. Bon Jovi's song ‘Blaze Of Glory’ was played and it’s been said that Lemmy of Motörhead sent flowers.

Every year around his death, White Power bands host different concerts across the world. The concerts are titled ISD Memorials. Both Blood and Honour and Combat18 are involved.