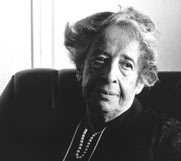 Leftist Wikipedia claims that she is "widely considered one of the most important political philosophers of the twentieth century." but that "In the popular mind she is best remembered for the controversy surrounding the trial of Adolf Eichmann, her attempt to explain how ordinary people become actors in totalitarian systems, which was considered an apologia, and for the phrase "the banality of evil". [...] In her subsequent 1963 report, based on her observations and transcripts, and which evolved into the book Eichmann in Jerusalem: A Report on the Banality of Evil, Arendt was critical of the way the trial was conducted by the Israelis as a "show trial" with ulterior motives other than simply trying evidence and administering justice. She portrayed the prosecutor, Attorney General Gideon Hausner, as one who employed hyperbolic rhetoric in the pursuit of Prime Minister Ben-Gurion's political agenda. [...] Arendt was also critical of the way that some Jewish leaders associated with the Jewish Councils (Judenräte), notably M. C. Rumkowski, acted during the Holocaust, in cooperating with Eichmann "almost without exception" in the destruction of their own people."

"Arendt was profoundly shocked by the response, writing to Karl Jaspers "People are resorting to any means to destroy my reputation ... They have spent weeks trying to find something in my past that they can hang on me". Now she was being called arrogant, heartless and ill-informed. She was accused of being duped by Eichmann, of being a "self-hating Jewess", and even an enemy of Israel. Her critics included The Anti-Defamation League and many other Jewish groups, editors of publications she was a contributor to, faculty at the universities she taught at and friends from all parts of her life."

Wikipedia tries to misleadingly present her criticisms as not concerning the validity of the trial and the evidence presented. However, Arendt criticized aspects such as that "eyewitnesses" who testified only rarely were able to distinguish between what actually happened to them years earlier and what they had read, heard or imagined in the meantime. [1]