Rasputin has been part of several controversial theories, such as regarding his assassination, Russia's involvement in World War I, and/or the Bolshevik Revolution.

Grigori, nicknamed "Grishka" when young, was one of several children of Efimi Andreyevich Rasputin, a heavy-drinking small-scale farmer at the village of Povroskoe, near the river Tobol, in the wilderness of forest that lay beyond the Ural mountains.[3] The Muravyev Commission, set up in 1917 by the Provisional Government to inquire into the events which led up to the abdication of the Tsar, ran to six volumes, and included interviews with Grigori Rasputin's family and neighbours, who descibed him "not as a kind father and holy man but as a vodka-swilling, lecherous thief".[4]

Grigori married Praskovia Dubrovina when he was nineteen. They had two sons, one who died in infancy, and Dmitri, who was an epileptic, and two daughters, Maria and Varvara, who later joined their father in St.Petersburg, leaving their mother permanently in Povrovskoe. Charged with horse-stealing he escaped from the police by seeking sanctuary in the monastery of Verkhoturye, staying there for three months. He emerged, it is said, a changed man, one witness saying "he seemed not in his right mind." He was never officially connected to the Orthodox Church; he was not a monk, but considered a "strannik" (or pilgrim) wandering from cloister to cloister. He was even regarded as a starets (ста́рец, "elder", a title usually reserved for monk-confessors) by those believing him to be a psychic and faith healer.[5] He impressed many people with his knowledge and ability to explain the Bible in an uncomplicated way. He claimed to have seen a vision of the Virgin Mary, and went on long pilgrimages, spending two years travelling to Mount Athos in Greece. But he always returned home to his family. Increasingly, he developed a band of followers to whom he would talk about 'salvation'. The village priest, Father Peter, however, saw him as a khlysty, a heretic, and after complaining about him to Bishop Antony of Tobolsk, a raid was made on Rasputin's house by a force of police and priests. Rasputin then went on a pilgrimage to Kazan where he broke through into polite society, and they prepared him for St.Petersburg, where he arrived in 1903.[6] 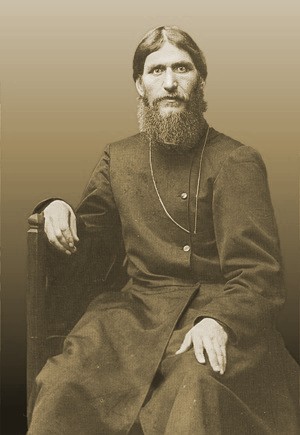 In 1906 Princess Militsa of Montenegro was visiting the Imperial Family and told the Tsarina Alexandra about Rasputin as a holy man and possible healer for their only son, Tsarevich Alexei, who suffered from haemophilia. Nicholas & Alexandra took tea with Militsa on November 1st following which the Tsar wrote in his diary that while there "we met the man of God, Grigory, from Tobol".[7] From that meeting Rasputin ingratiated himself into the desperate and gullible Tsarina's favour

He became a fatally influential figure in the later years of the Tsar's reign, especially after August 1915.[8] The Tsarina had seen Rasputin variously as a saintly mystic, visionary, healer and prophet but his enemies, as a debauched religious charlatan, heavily interested in sexual relations with his followers. "No man in Russia had more enemies."[9] On August 25 the Progressive Bloc had been formed in the Duma, comprising 300 deputies out of a possible 442. The Bloc's intention was to remove the 'dark forces' (Rasputin and the Tsarina) from power without repercussions, and lead the Empire to a full constitutional monarchy.[10] Throughout 1915 Alexandra had bombarded the Tsar with requests which were really Rasputin's, regarding Ministers and Duma Deputies. Finally, in August 1916, Rasputin told the Tsarina that her husband should dismiss the very competent Grand Duke Nicholas as Commander-in-Chief of the Russian Army and assume command himself, personally, yet at a time when the army was in retreat across their Western Front. She persuaded Nicholas this was the right thing to do.[11] This was clearly a disaster. Meanwhile the Secret Police reports on Rasputin were piling in. Rasputin openly discredited the Tsarina and in turn the Imperial family, which were crucial contributions to the fall of the Romanov dynasty in February 1917.[12]

Princess Zinaida Yusupova wrote to her son Felix, who was in the Crimea, "the general mood is one of disgust. The Prime Minister [Goremykin] continues to travel back and forth to the Empress. She is simply triumphant!"[13] Prince Felix had married the Tsar's niece, Irina, on February 9, 1914 in the Anichkov Palace Church, the Emperor being present writing in his diary "Everything went well. Lots of people!" A close friend of Yusupov was the Grand Duke Dmitry Pavlovich, an athelete and participant in the Olympic Games, a "gallant guardsman" and officer,[14] and in November 1916 these two nobles decided to assassinate Rasputin the following month at the Yusupov Palace on the Moika Canal. Numerous others, notably the monarchist Vladimir Mitrofanovich Purishkevich, a philologist and a Duma deputy, were drawn into the conspiracy to lure Rasputin to the palace. On December 4th, after a brief visit home, the Tsar & Tsarevitch returned to Army Headquarters.[15]

Sometime after midnight on December 16/17, Prince Felix Yusupov collected Rasputin from his apartment in St.Petersburg.[16] Rasputin was first poisoned and then shot. A police constable, Stephan Vlasyuk, standing on the Moika canal, had heard shots coming from the Yusupov Palace. He testified that "I saw crossing the courtyard in the direction of the gate two men in military uniforms but not hats, in whom I recognised Prince Yusupov and his butler Buzhinsky. I asked the latter what the shooting had been and he replied that he had not heard any shots." Two policemen testified that half an hour later an automobile left the palace. Felix had wrapped the dead Rasputin up with heavy cloth and bound him with rope. Purishkevich, Dr.Lazavert, lieutenant Sukhotin and Dmitry then drove the body in the latter's car to a bridge outside town where the body was thrown through a hole in the ice while Dmitry stood as lookout.[17]

Felix, initially denying involvement in Rasputin's disappearance, was interrogated on December 18th by the Minister of Justice Makarov to no avail. That night Felix and others were about to depart by train for the Crimea when the Prince was detained at the Nikolaev Station and asked to return under house arrest. The Grand Duke Dmitri was also under house arrest and both men moved to the Grand Duke's house. Purishkevich had, however, escaped. The Grand Duke Nikolai Mikhailovich wrote in his diary "it is reminiscent of murder in mediaeval Italy".[18] Early on the morning of December 19, Rasputin's corpse was found floating in the Malaya Nevka river near Great Petrovsky Bridge. On the night of the 20th Professor Kosorotov performed an autopsy and embalming. The heart was removed and placed in a special vessel. Bishop Isidor celebrated a requiem mass and the corpse was then removed to the Feodorov Cathedral at Tsarskoe Selo. The private funeral, conducted by Father A. Vasiliev, attended by the Tsar, Tsarina and their children, and others, took place on December 21st and he was interred in the centre of the church in the left side of the nave.[19]

Remarkably, it is said that in Russia today Rasputin is viewed favorably by many people and clerics, among them Elder Nikolay Guryanov[20]

An alternative theory on the assassination is that Rasputin was killed by Oswald Rayner, a member of the British Secret Intelligence Bureau, who participated in the conspiracy. This because the influential Rasputin hoped to broke a peace between Russia and Germany. According to this version, Rasputin was first shot by Prince Felix Yusupov and Vladimir Purishkevich, but was still alive and killed by the co-conspirator Rayner.[21][22]

Another theory involves Rasputin being used by Jewish associates for purposes such as personal gain and/or to undermine the Czarist regime in order to help Communist revolutionaries.[23]